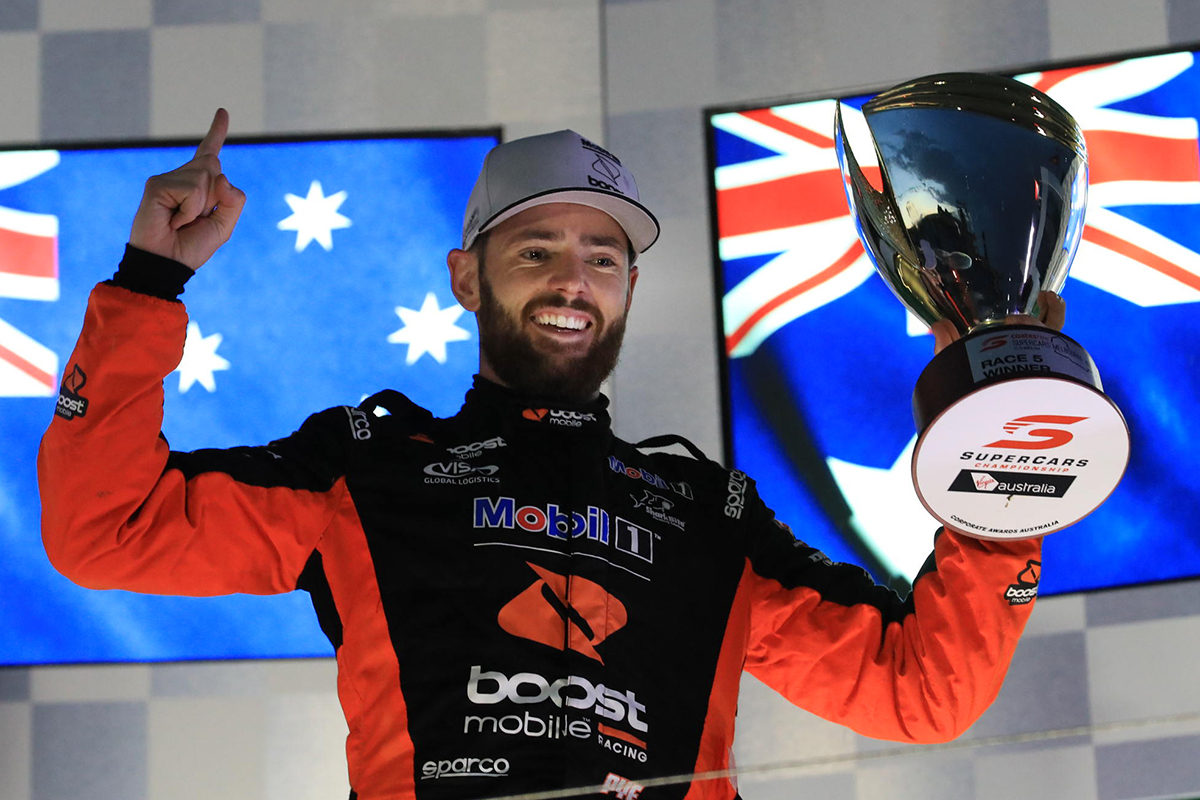 Scott Pye held off Jamie Whincup amid a late shower to claim a maiden Supercars victory in the third leg of the Coates Hire Supercars Melbourne 400.

Pye’s win in his 165th start is also the first for the Walkinshaw Andretti United alliance established at the start of 2018.

He held off Whincup and Nick Percat, the top three covered by one second at the end of 25 laps of Albert Park, as a late shower shook up proceedings.

Those three drivers were among the group to brave it on slicks, as others switched to wets with six laps to go, including Scott McLaughlin who finished 15th.

In dry conditions, McLaughlin capitalised on pole to lead the field around for the first lap, only to lock up and overshoot Turn 1 at the start of the second.

That dropped him down to sixth, as Pye inherited the lead, ahead of Whincup, Percat, Fabian Coulthard and David Reynolds.

Percat and Whincup had already been in the thick of the action off the line, a defensive move forcing Whincup to take to the inside grass momentarily.

The Brad Jones Racing driver then locked both front brakes briefly into Turn 1, as he slotted in behind the seven-time champion.

While Pye and Whincup stayed in close contact at the front, Percat could not go with them, falling to four seconds adrift with a chain of cars forming behind.

The leaders pitted together at the end of lap 10, with Pye emerging with a slightly-larger lead than before the stop.

Chaz Mostert, though, having pitted at the end of lap eight while in the pack behind Percat, jumped up from seventh to third with a slick undercut.

Through this next phase of the race, Pye cruised away from Whincup to lead by more than four seconds, as rain started to fall with nine laps remaining.

Pye’s crew was set up in pitlane waiting to put wets on the Mobil 1 Boost Mobile Commodore two laps later when the precipitation intensified, but he stayed out.

In all, 10 cars pitted to take wets, but Pye continued to lead the way on slicks.

A margin that floated around the three-second mark disappeared at Turn 13 with three laps to go, when Pye overshot and ran slightly wide.

He managed to gather it back up and keep Whincup and Percat - who flew in the greasy conditions to join the former - at bay into Turns 14 and 15. 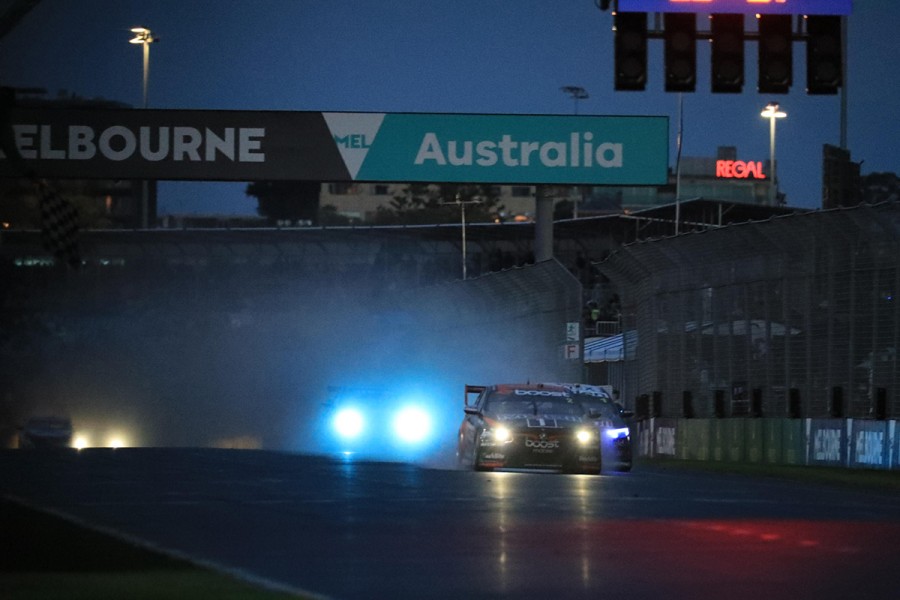 “It was a tough race and to have someone like Jamie behind you, it’s a long way.

“It means the world. We all have families and work hard for this. It feels like it’s taken a long time.

“My dad is up there, it feels like he could have helped a bit more with the weather! Obviously I miss him and this is for him today.

“But all these boys as well, I can’t thank them enough for giving me a car good enough to get the win.”

Second place for Whincup accompanied his victory in Saturday’s earlier race run in full-wet conditions, while third is Percat’s first podium of the year.

Percat stayed out until the end of lap 12 and did enough to negate the undercut from the likes of Coulthard - delayed by a right-front problem - emerging just ahead in what was effectively fourth.

He caught Mostert, who was then among the group of drivers to pit for wets.

James Courtney crossed the line in fourth, but lost that place to Tim Slade due to a five-second penalty incurred for a mid-race clash with Craig Lowndes at Turn 10.

For his part, Lowndes crossed the line in sixth, ahead of Mark Winterbottom, Will Davison and Cameron Waters.

In 10th, Mostert was the first driver home on wets, the long pitlane a factor in his final 39.8084s deficit to Pye.

Coulthard was 12th in the lead Shell V-Power Racing Falcon, three spots ahead of team-mate McLaughlin, who had radio problems and had to double-stack during the extra stops.

Championship leader Shane van Gisbergen and David Reynolds were 13th and 14th, while Michael Caruso was the lead Nissan in 16th and 18th-placed Todd Hazelwood - who did not pit for wets - the top rookie.

During the late pitstops, Garth Tander came unstuck on the slippery surface and made contact with his crew, and finished last, while team-mate James Golding had a pair of spins in the wet on his way to 24th.

Richie Stanaway split them, having served a drive-through penalty for pitlane speeding during his stop for wets.

The final race at Albert Park, and decider in the fight for the Larry Perkins Trophy, will be held at 1:45pm on Sunday.