De Pasquale, who began Sunday with a career-first pole position, clinched his second career win, his first since Darwin 2020, his team’s 138th, and a Shell Ford one-two.

It was also the 400th ATCC/Supercars Championship race win for Ford, with Andre Heimgartner claiming win No. 399 on Saturday.

Waters was one of several drivers bitten in a chaotic opening-lap skirmish, with fellow title hopeful Chaz Mostert also recording a non-finish.

A racy Andre Heimgartner, who won Saturday’s Race 9, muscled Tim Slade wide at the exit of Turn 5, with a chain reaction sending Waters and Slade spinning into the Turn 6 run-off.

Mostert was also caught up in the melee, with the bottleneck seeing Brodie Kostecki turn Nick Percat, with David Reynolds also affected.

With the right-rear wheel hanging out of his car, Waters limped back to the lane, followed by Mostert, Reynolds and Macauley Jones, all cars damaged in the chaos.

Several drivers benefited from the incident, none greater than Fabian Coulthard, who in his 450th race start, moved from 26th to 10th.

Having avoided the drama, the leading Dick Johnson Racing drivers headed the field, but a lock-up at Turn 1 nearly saw De Pasquale throw his race away on lap 3.

Courtney, Kostecki and Mark Winterbottom stopped on lap 5, with De Pasquale brought in from the lead on the following lap.

Heimgartner, having recovered from the opening-lap incident, lost critical ground in his stop after he stalled exiting his pit bay.

Davison, chasing his first win since Bathurst 2016, was brought in for his compulsory stop on lap 10, four laps after his teammate.

The two-time Bathurst winner rejoined behind his teammate and Courtney, who was effective second, albeit until lap 17 as Davison assumed the DJR one-two.

Van Gisbergen’s impressive first stint enabled the 2016 champion to slot in between Davison and Courtney, with the Kiwi looming to win a seventh win of the season in just 10 starts.

However, Davison’s #17 Mustang proved too wide for van Gisbergen, who was unable to clear the trailing Shell Ford.

The battle allows De Pasquale to create a gap, with the 25-year-old crossing the line to win the 24-lapper by 0.947s. 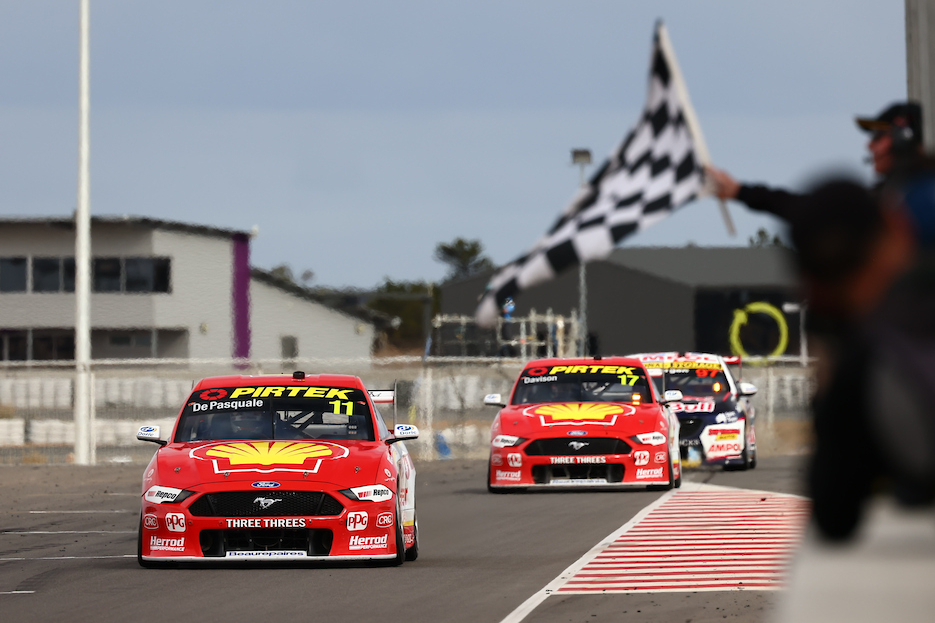 The non-finishes for Waters and Mostert, with Jamie Whincup only 11th, enabled van Gisbergen to extend his points lead over his teammate to 178 points, having entered the day 140 points in the good.

Mostert dropped to 228 points adrift, with Waters dropping to fifth behind Davison, 277 points off the lead.