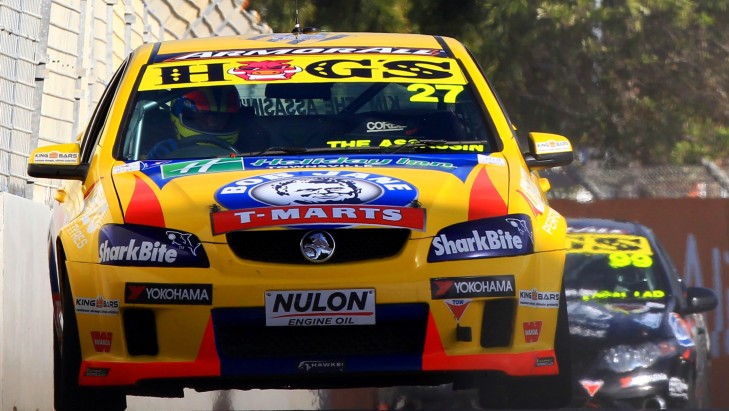 Victorians will make up a quarter of the 2014 Australian V8 Ute Racing Series field as they hit the track for Round 5 at the Wilson Security Sandown 500, Melbourne 12 - 14 September.

Jane first raced at his local track at the age of 17 and will kick off the weekend with a brand new Holden, which after a few major accidents since its birth in 2008, has had a full re-shell and makeover since the Townsville round.

"The Touring Cars are faster and the handlings more like the NASCARs I used to race, so it will be a bit of a challenge driving the Ute and the coupe over the weekend. I did the same thing back in 2011, plus it's always a bonus to get extra track time, even at a race track I've driven at since I was a teenager," explained the 47-year old.

Jane won the round in 2009 while on the same weekend celebrated his 150th V8 Ute Race, and will be out to grab his second podium for the year.

Go Pro Racing's Nathan Pretty is hoping to defend his Sandown title after the former V8 Supercar driver has been unable to clinch a win at a round this year and will be wanting it more than ever in front of a home crowd.

"It's been a while since we raced, so I'm really looking forward to getting back into it. I've always done well at Sandown and I'm hoping to continue the tradition, it would be great to get a round win on the board this year, it's definitely overdue," Pretty said.

Pretty's round wasn't without drama last year - when challenging for the lead in Race 1 with Rentco Racing's Kris Walton, the Ford star pushed him wide off the track and the two had words in Parc Ferme following the altercation.

In post-race interviews, Pretty referred to Walton as an idiot and Walton returned fire claiming Pretty as a Sook.

"I was pretty heated last year and I stand by my comments, Walton seems to have cleaned up his driving a fair bit, I've got nothing to lose at this stage in the competition, where he does," said Pretty.

McNiven and Urquhart last raced at Round 4 in Townsville and Barry in Perth, where he posted 16th overall for the round and will be back where he is most comfortable, in a Ford next weekend.

The Kiwi's will once again drive in the Peters Motorsport camp, Urquhart continuing in the #11 Holden and Barry in Wayne Wakefield's Ford.

Queenslander Stephen Wilson will race for the first time this year, after making his debut on the Gold Coast last year, and will be back racing in a Williams Race Tech Holden.

After two practice sessions on the Friday, the 32 car field will kick off racing on Saturday, 13th September, with Race 2 and Race 3 televised live on 7Mate (check local guides).

Walton leads the ARMOR ALL Drivers Championship heading into the round 18 points ahead of David "Sideways" Sieders.

Multispares Racer Ryan Hansford is in third on 396 points only 2 points ahead of Pretty with West Aussie Rhys McNally rounding out the top five.

The V8 Utes is just one of the exciting support categories at this weekend's Wilson Security Sandown 500 - book you tickets now to see all the live action.