Matthew Bink has continued his strong start to the inaugural Boost Mobile Supercars e-series, doubling his points lead in Round 2.

Bink, a Victorian who competes as MadRacer38, took two victories and a second place in the opening event, to start Tuesday evening's European leg 14 points clear at the top.

Second-place finishes at Silverstone and Hockenheim were followed by a victory in the Barcelona finale – taking his tally to three wins and three seconds from the first six races.

The 22-year-old will carry a 30-point lead over Adrian Yalpi (UltimateAge05) into the next Tuesday's third week.

Bink was second to Jacob Harvey (Har05) at Silverstone, and Andrew Dyson (Ssemper) at Hockenheim then won at Barcelona.

He finished just ahead of Yalpi in Races 2 and 3, noting he was "like a caravan" right behind.

"It was very tough," he said. "Having Adrian behind, it got pretty tiring.

"We've had a lot of great battles over the years in our series elsewhere.

"We're pretty good with each other and know what we're going to do, he had the pressure on those last two races.

"It was a rough start, I think Andrew got into the back of me coming out of Turn 3.

"I was able to get a little bit of a gap early, which helped."

Yalpi had to settle for fourth in the opener, but followed that with third and second, to move into second in the standings at Dyson's expense.

Having qualified on pole at Silverstone, Dyson had a disastrous run and finished at the foot of the order.

He made amends to lead the reverse-grid Hockenheim race from start to finish, crossing the line with a three-second advantage, then finished fourth in Spain.

Harvey's fortunes were almost reversed across the opening two races.

The winner of last year's Harvey Norman Supercars Forza Challenge at Bathurst kept Bink at bay to win at Silverstone but spun at Hockenheim's Turn 3 early and finished last. 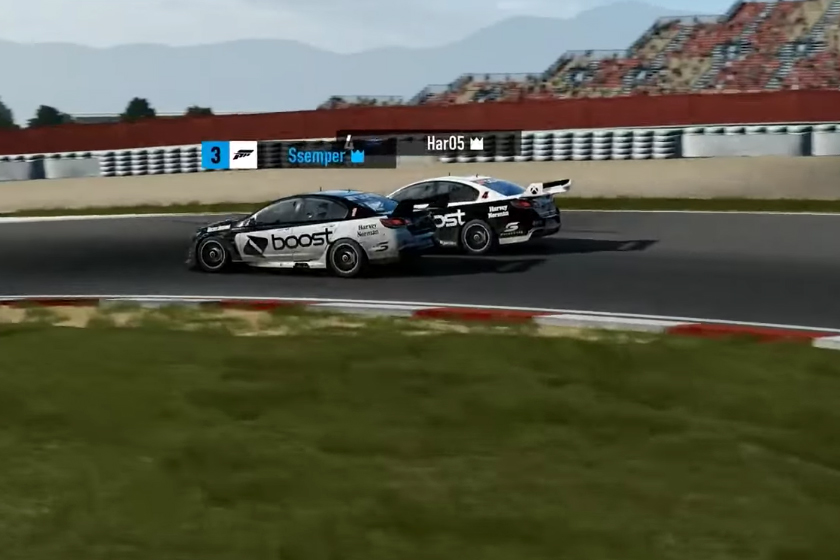 He regrouped at Barcelona to take third, passing Dyson after a scrap in which they spent the bulk of the penultimate lap side-by-side.

Harvey is fourth in the points, ahead of Matthew Collings (holden96), who took the evening's other podium finish with third at Silverstone.