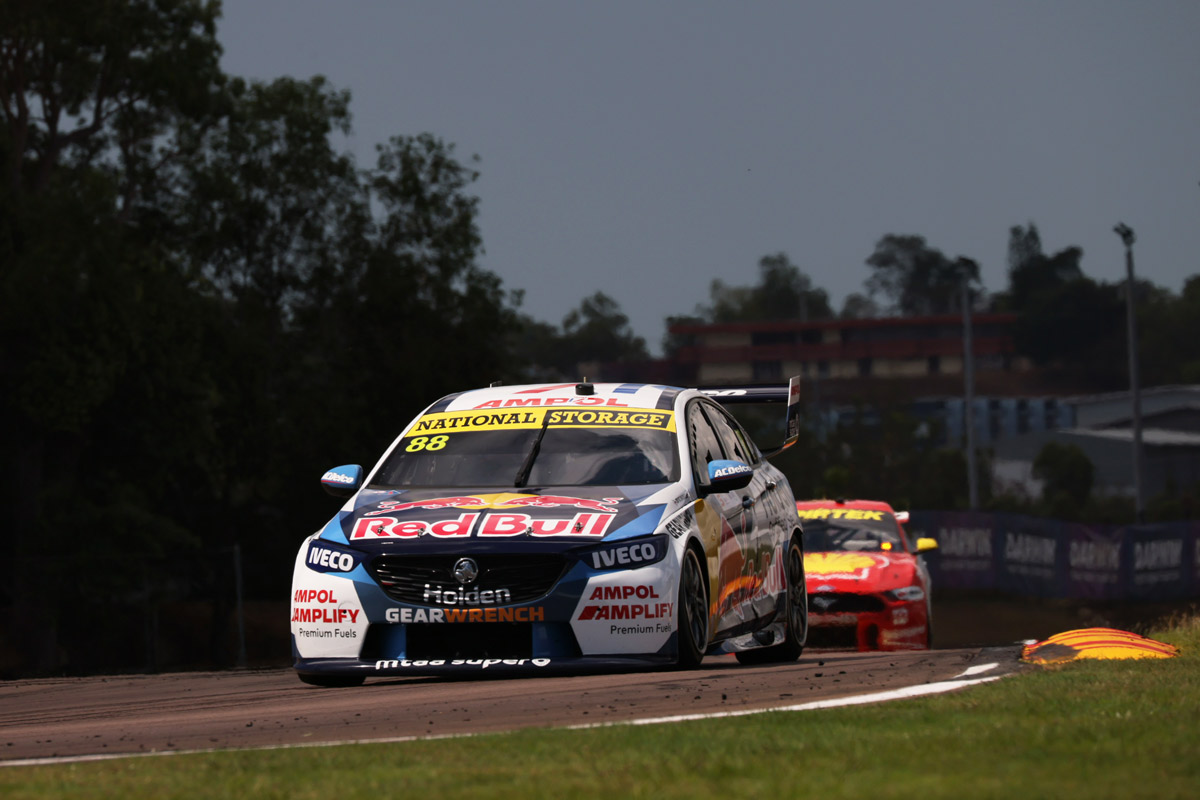 Jamie Whincup held off Scott McLaughlin in a tense finale to the BetEasy Darwin Triple Crown, securing the race and round honours.

It was a straight fight between the top contenders, with each using the best of their remaining soft tyres for the 38-lap, two-stint race.

From the outside of the front-row, Whincup was beaten to Turn 1 by polesitter McLaughlin, trailing the Shell Ford before diving into pitlane on lap five.

There was a near-miss as Whincup left his pitbay – Fabian Coulthard having to prop and let the Red Bull Commodore out before turning into the Shell bay.

McLaughlin pitted just one lap later and emerged narrowly ahead of Whincup, but could do nothing to stop the Holden blazing by down the outside into Turn 1.

The Ford driver stalked his rival following the stops, before falling away in the closing stages to finish 2.1 seconds adrift.

Whincup ended up tied on weekend points with Fabian Coulthard, taking out the Triple Crown trophy courtesy of his higher finish in the final race.

“That was a great battle,” said Whincup. “That reminded me of the old 2017/18 days where we were going head-to-head with these boys.

“We just kept chipping away at the car all weekend and made it fastest for race three.

“I thought after the penalty yesterday we were done and dusted for the Triple Crown but fantastic to have a great day and get right up there.”

Mostert moved from fourth to third off the start and, struggling for speed, allowed the leading duo to pull nearly five-seconds on the pack before the pitstops started.

Van Gisbergen jumped the Walkinshaw Andretti United entry at the stops and had a lonely race from there, able to run off at Turn 1 with two laps remaining without consequence.

Mostert spent the bulk of his race in fourth fending off Coulthard, who would have won the weekend had he made a move stick, while Nick Percat took sixth.

Mark Winterbottom turned 14th on the grid into seventh place, having run a 27-lap first stint before rejoining eighth and overtaking Jack Le Brocq in the closing stages.

Anton De Pasquale had entered the final race atop the round points tally, but had little to fight with having used soft tyres in the opening two heats.

He again re-used the best of his two soft sets in the finale but was never a contender, eventually taking the flag 23rd, over a minute off the win.

The 2020 Virgin Australia Supercars Championship continues with a second event at Hidden Valley, the CoreStaff Darwin SuperSprint, next weekend.

McLaughlin holds a 101-point lead over Whincup following the BetEasy Darwin Triple Crown, with Mostert best-of-the-rest in third, 210 away from the lead.