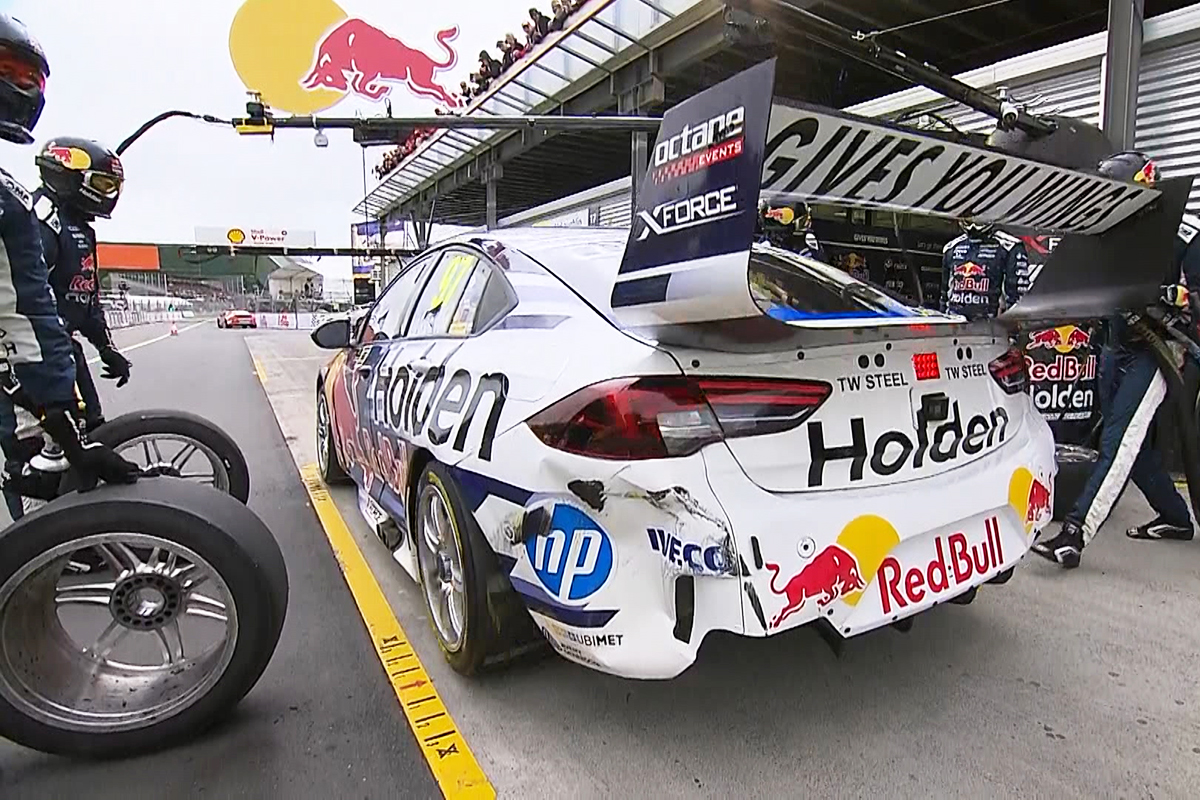 That was cleared by Deputy Race Director Michael Masi on Saturday evening based on the wheels not completing a full rotation, an outcome immediately protested by McLaughlin's outfit.

Hearings were undertaken at the circuit on Sunday morning, before ARMOR ALL Qualifying, followed by further deliberation.

The protest was dismissed leaving van Gisbergen as the Race 28 winner ahead of McLaughlin.

It means the pair will start Sunday's race on home soil with McLaughlin holding a two-point lead.

"It's consistent with the rulings that have been made during the year by the Deputy Race Director, who's empowered to do that most of the time," Triple Eight's Roland Dane said.

"It's a bit odd to challenge him. There's been some precedents set and they're pretty clear.

"The fact is there are tolerances on an awful lot of our rules, but they don't always tell us there are those tolerances because otherwise, being race teams, we'll use them all up."

A statement from DJR Team Penske read: "The rules are there to protect the safety of pitcrew members.

"Any rotation of the rear wheels during a pitstop, except for slight movement upon gear engagement, is a clear violation of the rules.

"The rules do not state how much the rear wheels can rotate - they state that they can't rotate. Injury can occur without a 'full revolution' of the rear wheels being completed.

"We have no choice but to accept this decision.

"We can only request that rules are applied and enforced as they are written and that there is consistency as well as clearly defined communication to all in their ongoing application."

They will line up a McLaughlin-led second and third, after Jamie Whincup took ARMOR ALL Pole in the Top 10 Shootout.

"We dismiss the Protest.

"We agree with the DRD’s submission that he and the Stewards enjoy a discretion to not impose a Penalty in appropriate circumstances notwithstanding that a breach of a Rule is established.

"We agree with the DRD that what we have termed the “second movement” of Car #97’s rear wheels in its second Pit Stop in Race 28 is comparable to the Incidents involving Car #9 at the Adelaide 500 and Bathurst Races which had not been Penalised. We uphold the Determination of the DRD in this case.

"We find that the DRD has a discretion not to refer a breach of Rule D11.8.8 to the Stewards in the circumstances of this case and in the general circumstances he outlined. We have no reason to consider that this exercise of discretion miscarried in this case.

"Indeed, had the Incident been referred to us, we would not have imposed a Penalty consistent with the policy which has been applied this Championship season.

"Having arrived at this position, it is unnecessary for us to decide whether a breach of Rule D11.8.8 occurred in this case. As explained above, a rotation does not of itself amount to a breach. The issue is whether the clutch has been engaged.

"It is clear that the wheels could not have rotated unless there was some degree of clutch engagement. However, we accept in the circumstances where 20% throttle had been applied, the movement is not consistent with full engagement of the clutch, potentially only minor engagement with no input from the Driver.

"Rule D11.8.8 does not require a positive step by the Driver to engage the clutch. However, the fact that there is no evidence available to us to assess the degree of engagement or whether the clutch pedal had been lifted supports the application of the DRD’s policy with respect to these types of Incidents.

"In other words, the absence of such data justifies a tolerance of the order the DRD has applied.

"The Parties were reminded of their right to appeal."