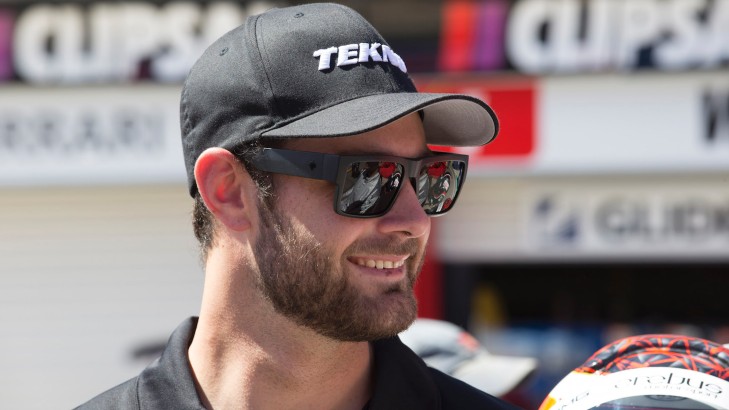 It's the biggest story of the season and will have huge implications for next year's Championship - Shane van Gisbergen's move to powerhouse team Triple Eight.

Last night, the 25-year old spoke about his choice to leave single-car team TEKNO Autosports, which has punched well above its weight and finished second in the title race, to steer one of three cars run by Roland Dane in 2016.

Van Gisbergen was heartfelt speaking of his current team - but the chance to run in equal machinery to the category's best in Jamie Whincup and Craig Lowndes proved too tempting.

"It's going to be quite a big step up," van Gisbergen told the Inside Supercars panel.

"There's no number one, two or three next year - we're going to be equal footing, equal opportunity, which is one of the reasons why I want to go there. We're going to be in the same gear racing up the front there - that's the main thing...

"Hopefully I'll get to take the number one there."

While he acknowledged it was a huge career opportunity to race for the leading team in the Championship, van Gisbergen was genuine when talking of TEKNO's performance and named team manager Steve Hallam as a mentor.

"It's certainly a good opportunity for the future - we've been working closely, TEKNO and Triple Eight the last few years, so it'll be good to move to the main team - but also sad at the same time," the kiwi said.

"A couple of years ago I wouldn't be racing in this sport if it wasn't for TEKNO. So it's a great little team and pretty sad to be leaving there as well...

"Steve Hallam has been good the last couple of years, very experienced in his racing and he's been through it all with big name drivers. He's been a big help."

Interestingly, van Gisbergen was adamant that his current team was more than capable of taking out the title in 2015.

"I've got that now," he said when asked 2016 meant a great chance to win the Championship.

"I'm in the running for the Championship this year - but next year is going to be strong too. Having two benchmark teammates like that is going to be pretty awesome. I'll be learning a lot but trying to race them. And we've seen in the past they race hard together already."

While van Gisbergen shied away from talking about the details and timeline of the deal being done, he said it made sense to complete it early on in the year.

"It seemed logical to do it early, it's locked away and announced, so ends any speculation and rumour, so we can get on with the year and focus on getting the results."

Heading to the Formula One Rolex Australian Grand Prix, van Gisbergen told v8supercars.com.au he'd race as hard as ever and, not surprisingly, loves the world stage.

"You're not hoping to get an F1 drive our of it, but it's good to put a good show on in front of guys like that and of that size," he said.

"It's another network and a whole other group of fans ... some guys purely only watch F1, so for us to put on a good show for those fans is pretty cool.

The cars hit the Albert Park street track tomorrow for practice and qualifying.