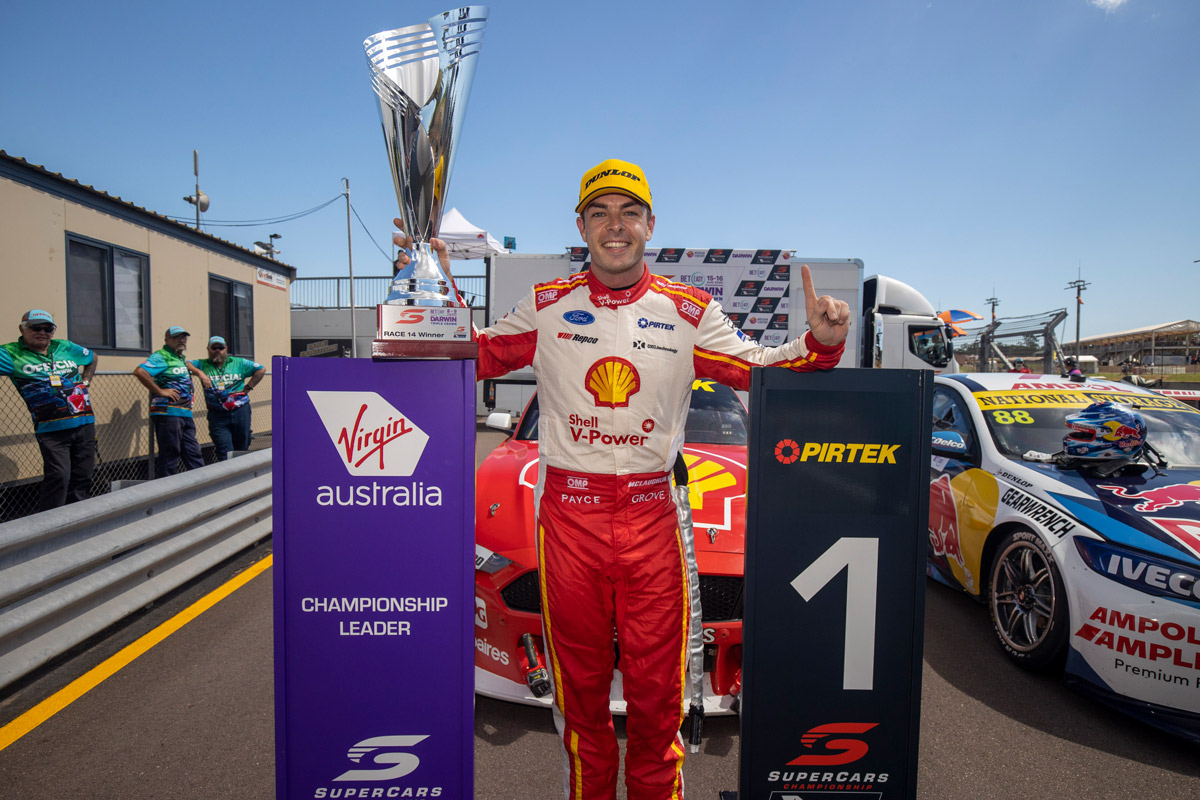 Scott McLaughlin extended his Virgin Australia Supercars Championship lead with a commanding win in the second leg of the BetEasy Darwin Triple Crown.

With the key contenders running soft tyres for both stints of the 38-lap race, the category’s star drivers filled the top placings in a race lacking the action of Saturday’s opener.

Starting on the dirty side of the grid, polesitter McLaughlin lost out to teammate Fabian Coulthard off the start.

Coulthard pitted from the lead on lap six, before McLaughlin took his service a lap later and rejoined narrowly ahead.

McLaughlin’s task was immediately made easier when Coulthard speared off at Turn 1, dropping behind Jamie Whincup to sit an effective third.

The top positions remained stagnant for the duration, with McLaughlin ultimately cruising to a 1.4 second win over Whincup.

It marked a return to the podium for the championship-contending duo after both finishing down the order on Saturday after time penalties.

“Sorry to the guys there for yesterday but glad I was able to bounce back,” said McLaughlin.

“It was a great start from Fabs, it was like the best start I had done for a long time and he just absolutely smashed me.

“[I did a] big in-lap, the boys’ pitstop was amazing, we got in front and then I saw Fabs run wide so I got a bit lucky there.”

Added Whincup: “We got a little bit gifted by Fabs, he got a bit distracted by Car #17 down at Turn 1.

"Both Shell cars are very fast but happy to be on the podium. It was ordinary day yesterday so we needed a couple of results today to get back up in the points."

Asked of his off-track excursion, Coulthard said: “I probably got a little excited…

“I just locked a left-front brake, you’re on the absolute threshold anyway of braking as late as you can. The last thing you need is a slight lock-up.”

Shane van Gisbergen held off David Reynolds in an entertaining late scrap for fourth, having moved up from their seventh and eighth-place starting slots.

Reynolds was the strategic outlier, running a 29-lap opening stint before pitting and rejoining sixth behind Nick Percat and van Gisbergen.

Both found their way around Percat but, despite his fresher rubber, Reynolds couldn’t find a way by the Red Bull Holden Racing Team entry.

“Dave should have been able to blow past me, but you just put him in hot air and take the downforce off and he was stuck,” said van Gisbergen.

Anton De Pasquale was a somewhat surprise seventh, running strongly throughout despite having used six of his eight soft tyres on the way to victory on Saturday.

Walkinshaw Andretti United’s Chaz Mostert set the fastest lap of the race on the way to eighth ahead of lead Tickford driver Cameron Waters and Kelly Racing’s Andre Heimgartner.

A third and final 38-lap race will complete the BetEasy Darwin Triple Crown this afternoon, with drivers able to pick the best of their remaining soft and hard tyres.

The Triple Crown trophy will this year be awarded to the driver who scores the most points over the whole weekend.