Scott McLaughlin continued his march towards back-to-back Supercars titles with victory in the Sunday race at the Century Batteries Ipswich SuperSprint.

McLaughlin led the entire 65-lap contest outside the two pitstop cycles, but had to hold off a charging Shane van Gisbergen in a thrilling finish.

Van Gisbergen closed throughout the final stint but could not get close enough to make a move, eventually taking the flag 0.7s adrift.

The result secured Ford the 2019 Supercars Manufacturers’ title, which is based on total race wins through the season.

“Mine was pushing like a bus or a truck, it just had no turn in it. But it was an awesome battle, we always have good battles, me and Shane."

Added van Gisbergen: "I don't like coming second, but that was an awesome race.

“My car was awesome today, I tried as hard as I could. I knew we had a lot of adjustment in the rollbars. I was worried about how we qualified it, but a quick tune-up and we were away."

Polesitter McLaughlin held off a determined Mostert at the start; the Tickford driver sticking around the outside of Turn 1 and 2, before settling into second.

Whincup and van Gisbergen held their third and fourth grid slots through the first stint, after the Kiwi narrowly missed out on rounding up his team-mate on the outside in the opening corners.

McLaughlin’s lead over Mostert was out over three seconds before the Shell Ford pitted on lap 15.

Mostert stopped four laps later and lost track position to Whincup and van Gisbergen, who had stopped on lap 14 and 20 respectively.

The Commodores then traded places on lap 32; Whincup – struggling on older tyres – letting his team-mate through on the front straight.

On lap 38, McLaughlin, Whincup and Mostert pitted together for their second stops, while van Gisbergen continued for just one more lap before also taking service.

When the stops shook out, McLaughlin held a 4.5s lead over van Gisbergen, with Mostert leap-frogging Whincup.

Van Gisbergen then set about clawing into McLaughlin’s lead, trimming it to 1.6s with 10 laps to go, and getting to within 0.5s with five to run.

That was as close as he got; McLaughlin holding his nerve to secure a 14th win for the season. 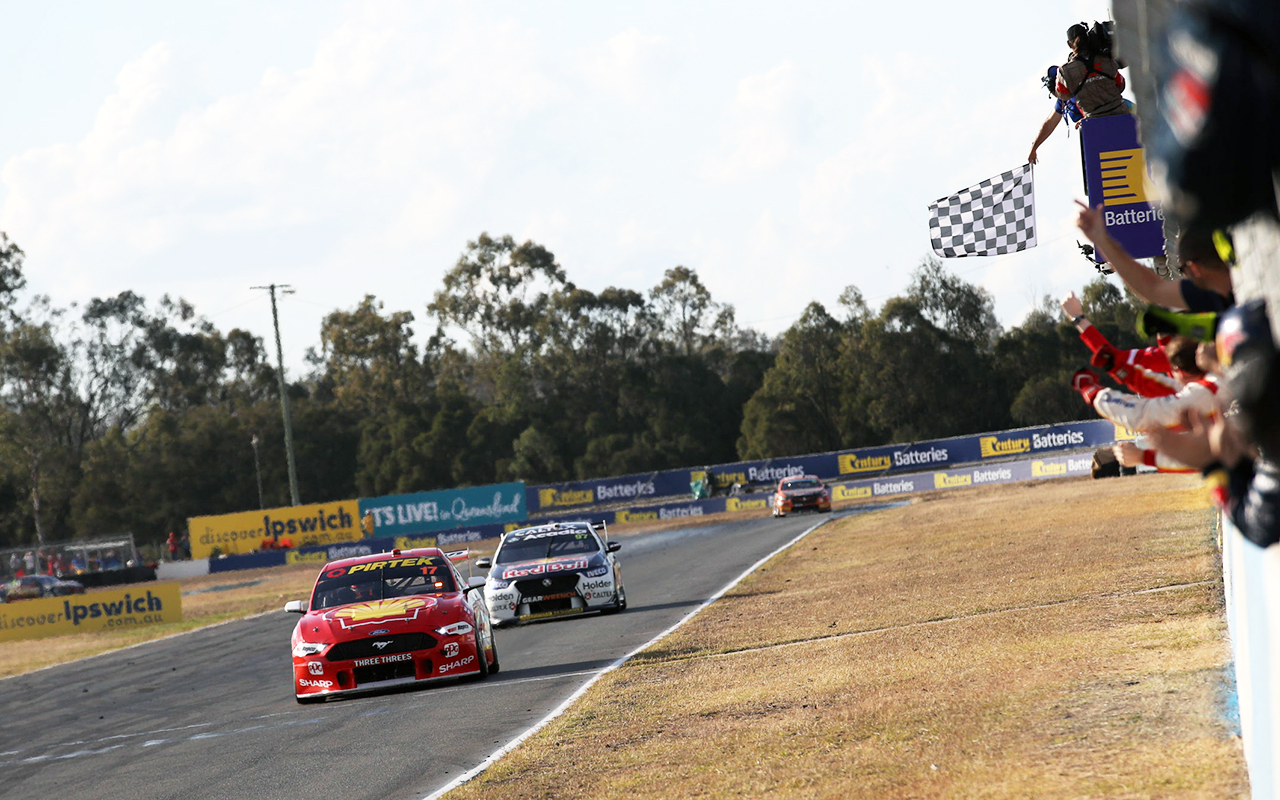 Mostert took a second podium for the weekend in third, albeit 10s from the leader by the chequered flag, with fourth-placed Whincup another 6s in arrears.

Will Davison backed up his Saturday podium with fifth, ahead of Tickford team-mate Cameron Waters and Kelly Racing pair Andre Heimgartner and Rick Kelly.

De Pasquale lost positions to Nick Percat and Mark Winterbottom to finish 11th, while Reynolds was forced into a third stop; the team having narrowly missed the minimal fuel drop.

The extra stop, to take on just one-litre of fuel, dumped Reynolds back to 21st in the final result.

Ninth for Percat marked a strong recovery after stalling at the start and falling outside the top 20, and gave Brad Jones Racing a pair of top 10s for the weekend.

Coulthard started 11th and held that spot until lap nine, when a tangle with De Pasquale sent the Shell Ford into a spin at Turn 4.

The left-front of the Penrite entry had tagged Coulthard’s left-rear after the Mustang driver locked a left-front and ran wide, in what officials determined a racing incident.

Coulthard could only recover to 18th, narrowly avoiding being lapped by his race-winning team-mate.