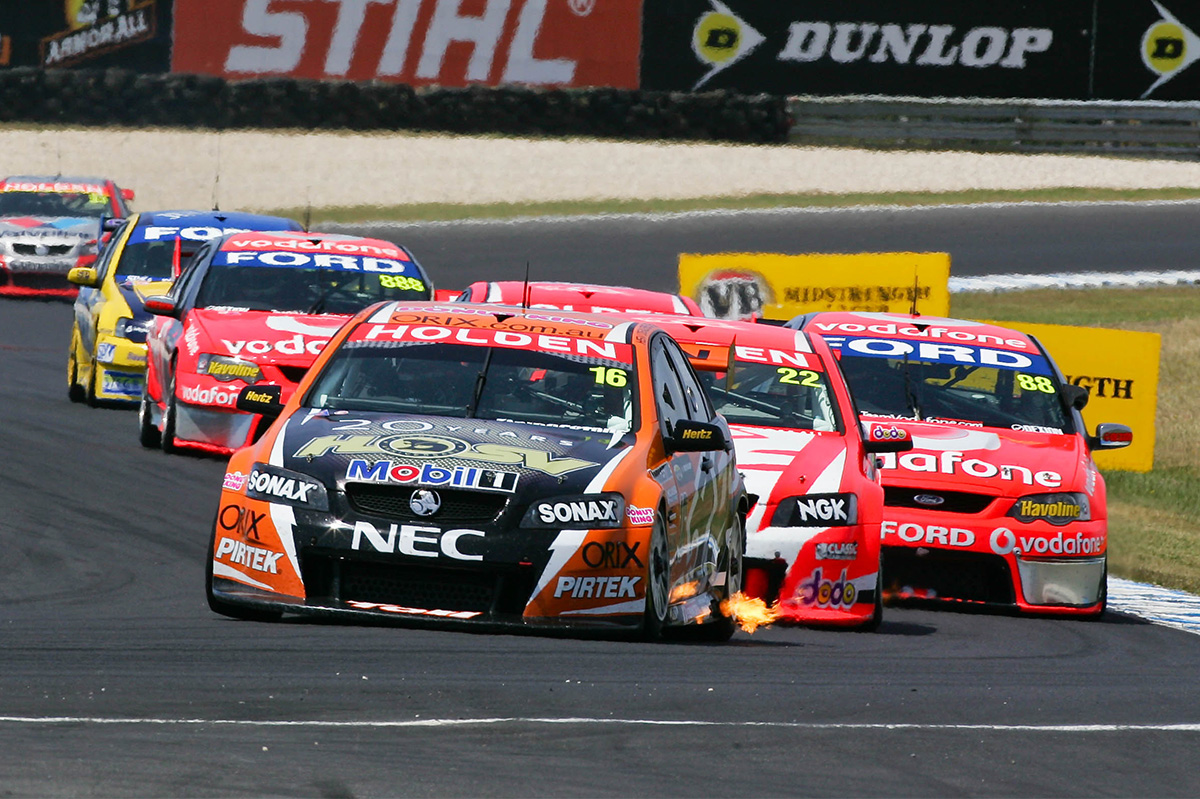 Winning the title with a round to spare has proven a relatively rare feat, with Jamie Whincup’s 2014 crown the next most recent example.

Since the Australian Touring Car Championship was first held as a series of races in 1969, more than half of the titles have gone to the decider.

While not all have been barnburners, a handful have etched places as some of the greatest races in championship history.

Here are five races that lived up to the billing of a great Grand Final. 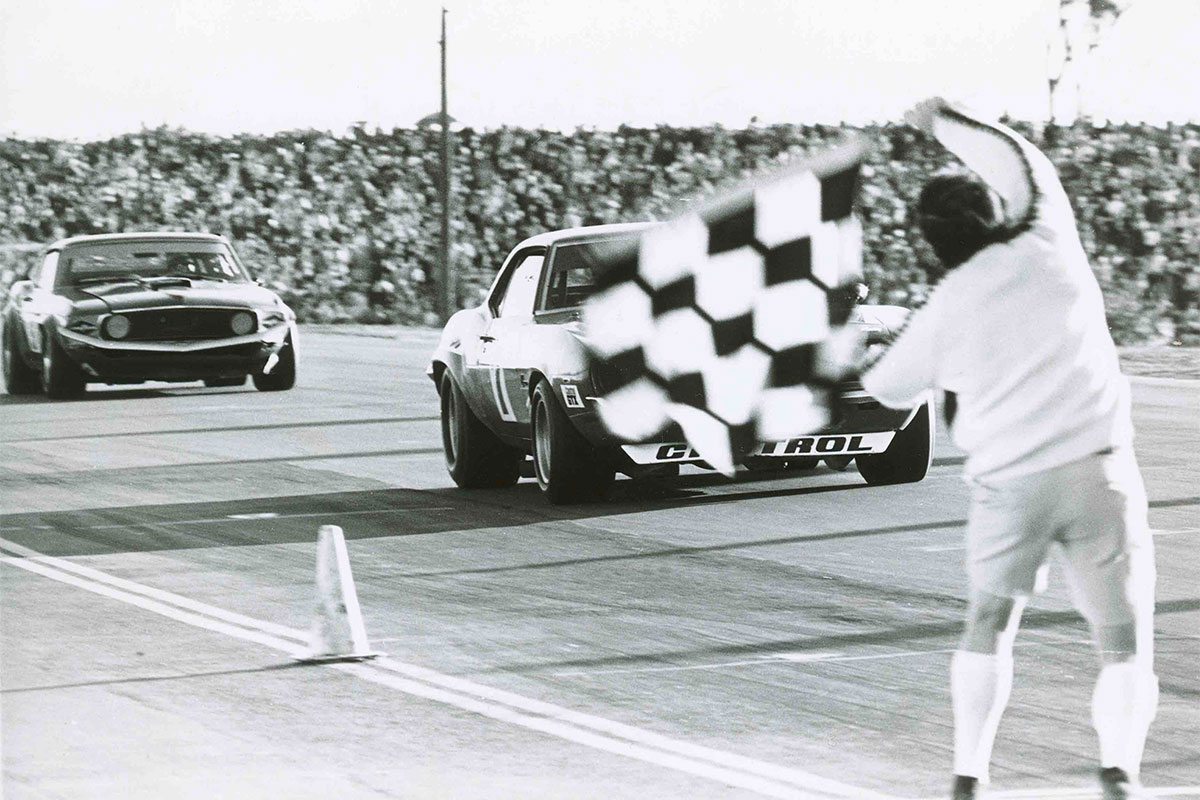 Before the rise of Peter Brock, Allan Moffat's great rival was the stocky used car and tyre dealer from Brunswick, Bob Jane.

While Jane was already a multiple series champion heading into the 1971 season finale, Moffat was still pursuing the first title for his beloved Coca-Cola Ford Mustang Trans-Am.

Oran Park was a true winner-takes-all showdown: Jane led the table by three points, but a victory for either would be enough to secure the crown.

The title contenders shared the front row of the grid, Moffat heading Jane with a margin of 1.2 seconds in qualifying.

The Ford made a fast start to lead the opening 15 laps of the 45-lap race, before the Mustang's gearbox jammed in second gear.

By the time Moffat had freed it, he was 15 second behind Jane and down to third place.

It didn't take long for the fired-up Moffat to catch and muscle his way past Ian 'Pete' Geoghegan, but the Mustang was still some six seconds adrift of the race-leading Camaro.

Then came the weirdness; a spectator aboard their Valiant Pacer decided to join the race!

Remarkably, the leaders both raced past it without incident, and the Valiant's pilot was hauled away by police.

Moffat threw everything at Jane in the closing laps, but came up two car lengths short as the chequered flag waved. 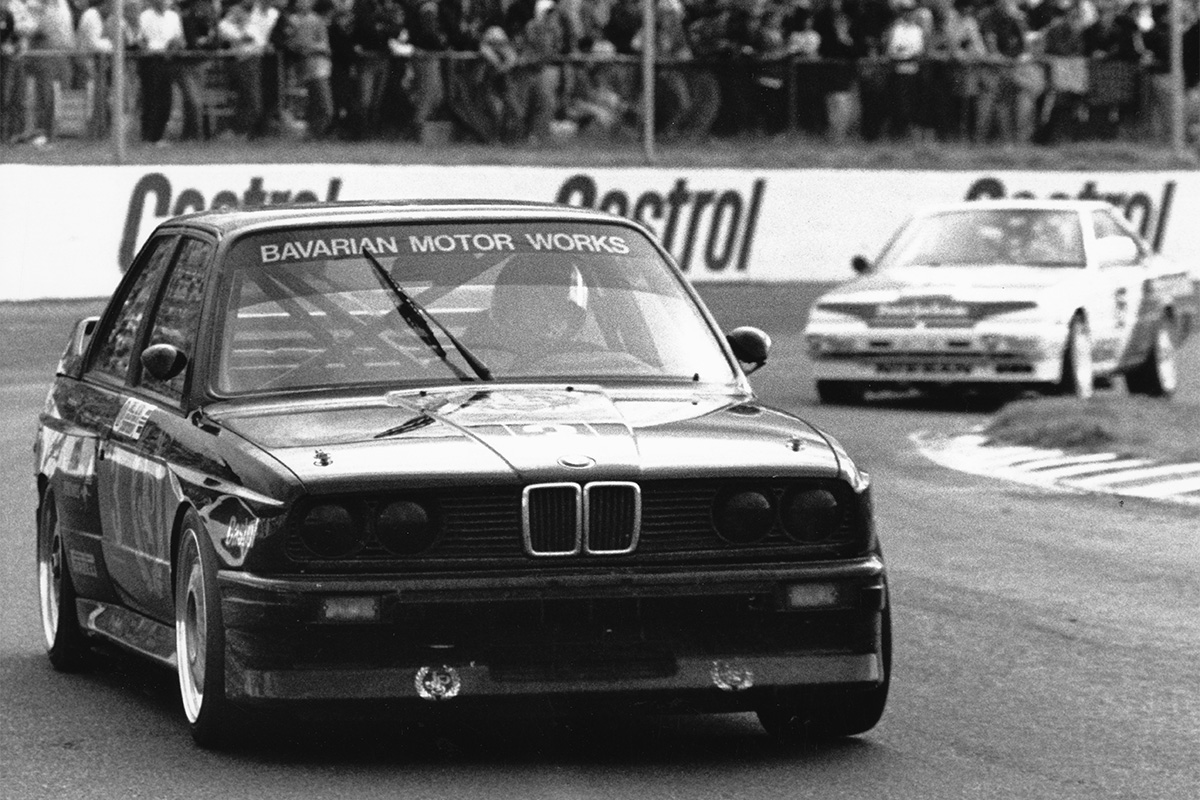 One of the most competitive years of the Group A era in Australia, the title battle boiled down to one of David versus Goliath.

Seton was armed with a turbocharged Nissan Skyline, consistently the fastest outright cars on the grid.

Wins at Calder, Wanneroo and Sandown gave him a three-point lead heading to Oran Park.

Right on his tail was Richards, BMW's brand new M3 playing the David role to perfection.

Its light weight and tremendous handling allowed 'Gentleman Jim' to wear down the bigger, faster cars and claim three wins of his own.

Both teams entered three cars for the showdown, but ultimately team tactics took a back seat to Mother Nature.

A mid-race sprinkle of rain allowed Richards to run down George Fury's Nissan to snag second place before setting his sights on race-leader Seton.

As Seton skated wide through the kink, Richards arrowed the black and gold M3 into a gap; paint was exchanged, and the Kiwi sped through into the lead.

Seton didn't get the chance to strike back; a plume of white smoke indicated the Skyline's turbo had expired, confirming Richards' second of four championship triumphs.

Phillip Island hosted the final round between 2005 and 2007, and the title was still in play at the 'Grand Finale' on all three occasions – but none were closer or more fiercely fought than the 2007 decider.

A new points system that awarded a maximum haul of 72 points for a race weekend – a format used for just one season by Supercars – saw just two points separate the combatants at the end of the year.

Whincup led into the final three-race weekend, victories in the Sandown and Bathurst enduros helping him edge seven points clear of his Holden rival.

Tander had erased the margin by Saturday night, winning the opening sprint from seventh on the grid to go into Sunday's final two races tied on points with the Ford driver.

He repeated the dose in Race 2, heading home Todd Kelly and Whincup to give Tander a handy seven-point margin.

The final race boiled down to a four-car scrap between the title contenders, Kelly and Craig Lowndes.

Tander held a watching brief in fourth, enough to secure the title – provided Kelly could hold Whincup off for the win.

The Triple Eight driver threw everything at the Holden Racing Team Commodore but fell 0.9 seconds shy at the flag.

The former Olympic Games precinct at Homebush hosted a handful of championship deciders, but none so drama-filled as the 2010 season finale.

Whincup led Winterbottom and points-leader Courtney by the middle stages of the Saturday race, but all three contenders struck trouble at the same time in what has become an iconic moment in Supercars history.

Darkening clouds overhead made good on their threat of rain as the leaders charged down to Turn 5 on a race restart.

A host of cars slammed the fence including the three title contenders, who all damaged their machines to varying degrees.

All limped their cars back to the pits, Winterbottom's title hopes ending with his #5 Ford too mangled to be repaired in time to rejoin the race.

But activity was frantic in the Dick Johnson Racing and Triple Eight Race Engineering garages.

Both squads worked flat-out to get Courtney and Whincup's cars fixed in order to complete one final lap of the race to be classified as a finisher, thus securing vital championship points.

Courtney's car made it out to snag 15th place; Whincup's final lap was deemed too slow by the rules, meaning a non-finish and no points.

The 60-point haul more than doubled Courtney's lead, and a 14th-place finish on the Sunday was more than enough for he and DJR to secure the championship victory.

Five drivers arrived in Newcastle with a mathematical shot at the title, but this showdown revolved around championship leader Whincup and closest challenger McLaughlin.

By Sunday the title contenders had been whittled down to two, and a lap one collision on Saturday for Whincup meant McLaughlin only had to finish 11th or better to secure the title.

'Dramatic' doesn't quite begin to describe the title-deciding race.

McLaughlin qualified on pole and lead the early laps, but a pitlane speeding penalty dropped him outside the top 20.

He regained the lost ground by mid-race, only to tap Simona De Silvestro into a spin to gain that vital 11th placing, resulting in another drive-through penalty.

In contrast, Whincup was having a steady drive at the front of the field, taking over the lead when teammate van Gisbergen moved aside on a restart.

As the laps waned McLaughlin, whose Falcon carried damage from a tangle on a subsequent restart, had to pass two cars to secure 11th place and stave off a charging Craig Lowndes, armed with fresher tyres.

He did the former but not the latter: a pair of bold passing moves took him past Garth Tander and James Moffat, but a mistake at Turn 1 with two laps remaining allowed Lowndes to range up alongside.

Contact between the pair bounced the #888 Holden into the wall.

As he took the chequered flag in 11th place McLaughlin was handed a post-race time penalty for the Lowndes incident, handing Whincup his seventh title.