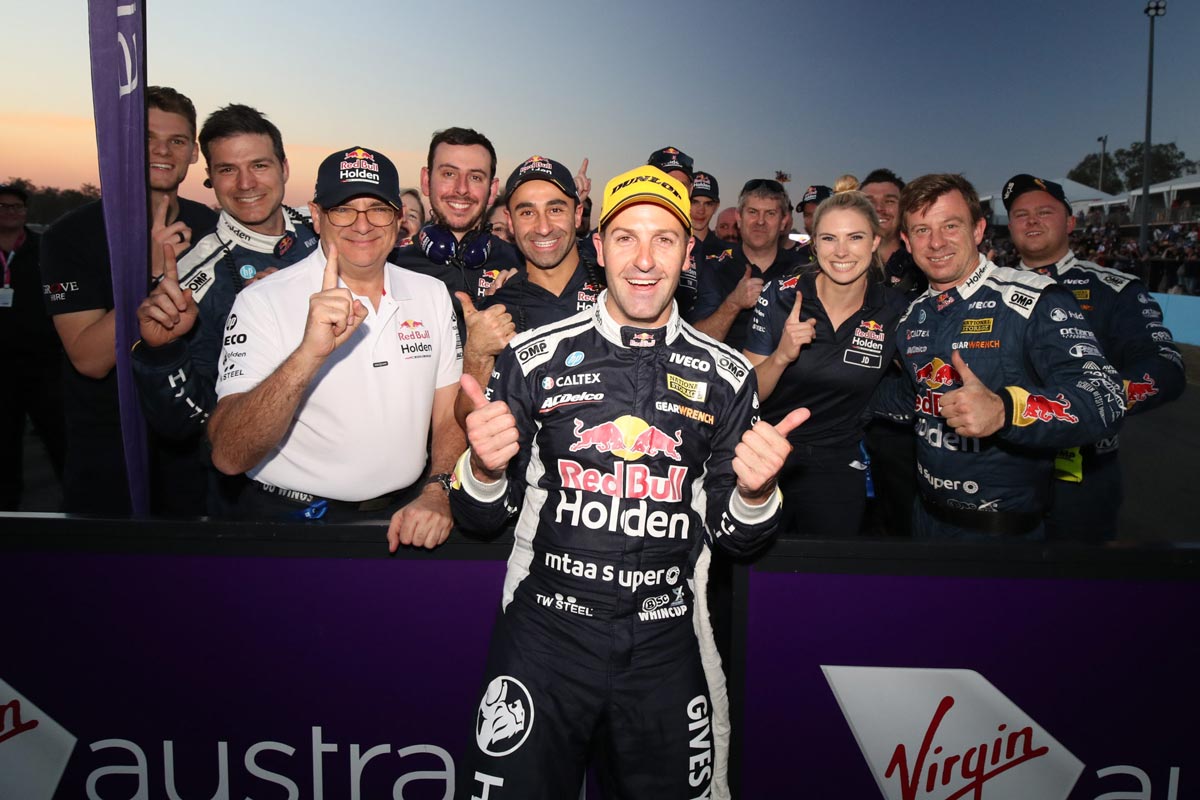 Jamie Whincup scored a commanding win in the opening race at the Century Batteries Ipswich SuperSprint, ending a 24-race drought.

Winless since the Sandown 500 last September, Whincup out-muscled pole-sitter Scott McLaughlin on the opening lap and controlled the 39-lap contest from there.

Will Davison finished second, his first podium since Bathurst 2016 and the first for Phil Munday’s 23Red Racing, while Chaz Mostert kept McLaughlin off the podium in third.

"I've been reminded, especially the last couple of months, that I haven't had a win for a while, so it's certainly fantastic to get a win,” said Whincup.

“A big thanks to the Holden supporters for hanging in there, we've had a bit of a drought, it's been a tough run, but we've been chipping away."

Lining up second to McLaughlin, Whincup delivered on a pre-race promise to “give it a red hot go” and “make a race of it” at the start.

Ranging down the outside of McLaughlin into Turn 1, Whincup performed a switch-back on his rival, nudging the Mustang’s right-rear and taking off into the lead.

McLaughlin took another right-rear bump at Turn 2, losing second to an equally hard-charging Davison, who had briefly made it three-wide on the outside into Turn 1.

The Shell Ford driver was able to gather it up and hold off the remainder of the chasing pack into Turn 3 and, 10 laps later, went for an undercut with an early stop.

Whincup built a 4s margin over Davison before stopping on lap 15, with the Milwaukee Mustang and the chasing Mostert taking service four laps later.

When the stops shook-out at the halfway mark, Whincup had 5s over McLaughlin and 6s over Davison and Mostert, who set about harassing the #17 entry.

Younger tyres on the Tickford cars proved too strong, with Davison pulling off a big lunge into Turn 3 on lap 27, and Mostert also sliding by a short time later.

“He's a great fella, great to have in the sport and I'm privileged to drive for him.

“It's been a long time coming, but it's been a good weekend until now so I'm glad I was just able to get this monkey off the back. Hopefully there's plenty more."

Shane van Gisbergen also ran a long first stint and scored fifth, ahead of the remaining Tickford Mustangs of Cameron Waters and Lee Holdsworth, who traded places in the closing stages.

Reynolds had started eighth but was delayed by a slow pitstop, while Coulthard lost time mid-race with a lock-up and off at Turn 3.

Another with pitlane trouble was Scott Pye, who ran 15th early before falling to the back with a left-rear wheel that refused to come off in his stop. He finished 21st.

Tim Slade had been on track for a top 10 before running out of fuel in the dying laps, joining team-mate Macauley Jones on the retirements list.

The late action included contact between Todd Hazelwood and Anton De Pasquale while battling for 14th.