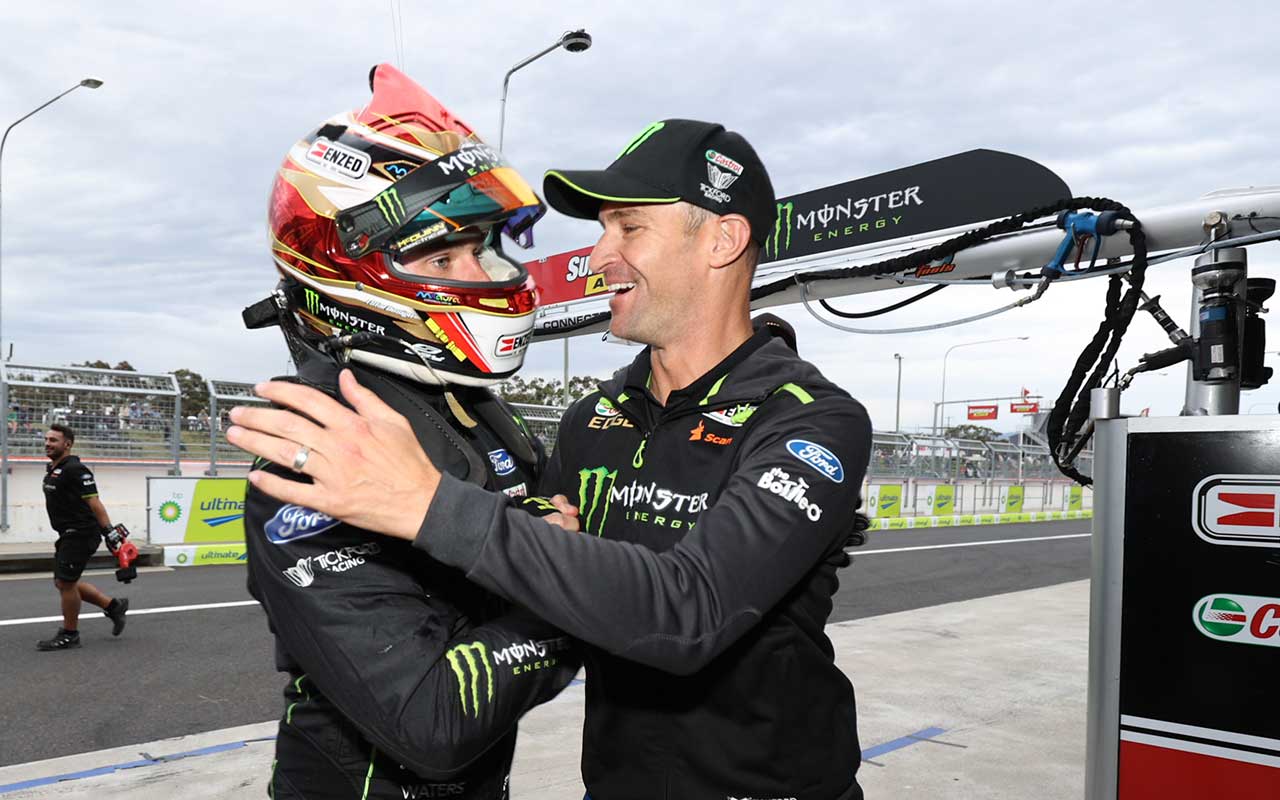 Cameron Waters has secured pole for the Supercheap Auto Bathurst 1000 with the fastest-ever time set in an ARMOR ALL Top 10 Shootout at Mount Panorama.

Eyes were pointed skywards as ominous clouds hovered over the Mountain but rain held off and it was Waters who cashed in.

The Monster Energy Mustang has been on the pace from the outset of the weekend, Waters having topped opening practice on Thursday.

He made that form count when it mattered, becoming the only driver to dip into the coveted 2:03s bracket with his inch-perfect Shootout lap.

As it turned out, his 2:03.5592 put him a remarkable 0.4429s clear of champion-elect Scott McLaughlin, eclipsing Chaz Mostert’s lap record in the process.

“Man I’m so pumped, that was absolutely awesome, so much fun,” Waters said.

“I made a bit of a mistake at The Dipper but who cares, I had fun doing that!

“I knew the markers I had to hit and just went and did it. I knew we’d go a fair bit quicker than practice and I gave it everything.

“This is so special for all the boys at Tickford, they’ve worked so hard over this whole period they’ve been away.

“This [cheque] will go towards beers on Sunday night, no matter how we go.”

Percat set down an impressive first-up mark of a 2:04.2474 – three tenths faster than his qualifying time yesterday – to get the Shootout underway.

That effort was quickly put into perspective when the next driver on-track, James Courtney, lapped more than a second slower.

“That was the quickest I’ve done around here,” said Percat.

“First car out, you don’t know what the base is for the track, so to do that was pretty cool.”

Van Gisbergen had looked set to challenge for second until running a touch deep at The Chase.

“It wasn’t a good lap, I stuffed it up. We have a fast car, I just needed to get it right,” he said.

Courtney hung on for ninth after Jamie Whincup spoiled his lap by running wide at The Chase, ending up 2.8349s off the pace.

The #888 Red Bull Holden pairing of Whincup/Craig Lowndes will thus start the Great Race from 10th.

“We potentially underestimated the wind, there was a bit of a tailwind down Conrod and I reckon that’s what caught us both out,” he said.

“There’s big straights here so we had the cars trimmed right out and with a bit of a tailwind you’re heading into The Chase pretty quick.

“I’m disappointed with myself, I feel like I let the team down a little bit today so I need to make up for it tomorrow.”

Grid positions from 11th to 25th had been formalised in ARMOR ALL Qualifying yesterday.

The 161-lap race will start at 11am local time tomorrow, after a short warm-up session from 8:30am.