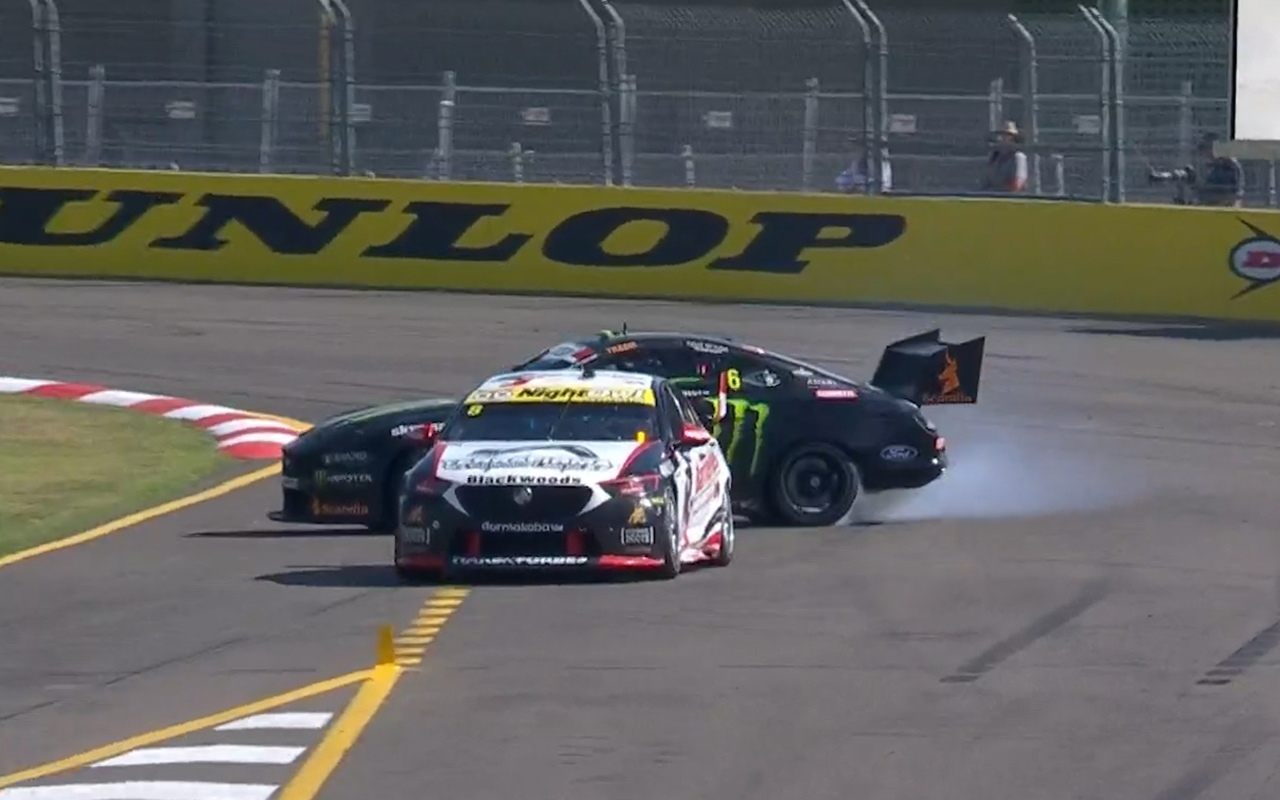 The duo were part of a four-way battle for third place on lap 15, with action kicking off as Nick Percat ran wide at Turn 11 from the lead of that pack.

Jamie Whincup swooped and as Percat moved to dive into the pits, Waters slowed and was spun by van Gisbergen.

After investigating the matter, the stewards decided no driver was “wholly or predominantly to blame” – clearly to the dismay of Waters.

“I was in a bit of a train so we decided to pit and try to get some clean air,” Waters said.

“Coming into the pit and as I started to lift off the throttle I just got drilled by Shane and got turned around.

“He apologised to me after the race and obviously didn’t know I was going to pit, it’s frustrating but it is what it is.

“I thought he should have gotten a penalty but he didn’t, so it looks like he owes me a free kick, and we’ll go on to Tailem Bend.”

Waters ultimately slipped to a final finishing position of 12th while van Gisbergen went on to win the race, capitalising on a Safety Car period that let him attack a bunched-up field while on fresher tyres.

For his part, the Red Bull Holden Racing Team star admitted he had feared a penalty would be handed his way.

“I saw Percat got passed the corner just before and then I saw him come across the track really harshly to get into pitlane,” van Gisbergen explained.

“I knew Cam was going to check-up, so I checked up but not enough and then Cam really got on the brakes and followed Nick in.

“It was touch and go whether I thought I’d get a penalty, but it was a racing thing and everyone was just desperate trying to get into the pits and checked up more than they should have.

“A little bit lucky there I feel, but probably the right call to have a racing deal.”

The 2016 champion did not waste any time in stating his innocence, immediately jumping on the team radio moments after contact to offer his view of the incident.

“I just called it how I saw it. I know Bairdo [Craig Baird, Driving Standards Advisor] listens to that stuff and from my point of view it was clear that Percat was desperate to get into the pits, he had no tyres left and was getting passed by everyone,” van Gisbergen added.

“Cam just got off the throttle a lot more than normal at that point.”

Waters has dropped back behind Chaz Mostert to fourth in the championship, with van Gisbergen holding fifth.

The 2020 Virgin Australia Supercars Championship will resume with the Repco SuperSprint at The Bend on September 19-20.