McLaughlin led the first half of the race and looked set to fight Craig Lowndes – on top during the third of the four stints – for the honours at Sydney Motorsport Park.

However a Safety Car period with 20 of the 77 laps remaining brought van Gisbergen and Whincup back into the game.

With slightly-fresher rubber, van Gisbergen made light work of Lowndes and then McLaughlin in the run home to win Supercars' first night race in Australia since 1997.

McLaughlin was also passed by Whincup on the run home, settling for third, with his championship lead over van Gisbergen trimmed to 89 points. 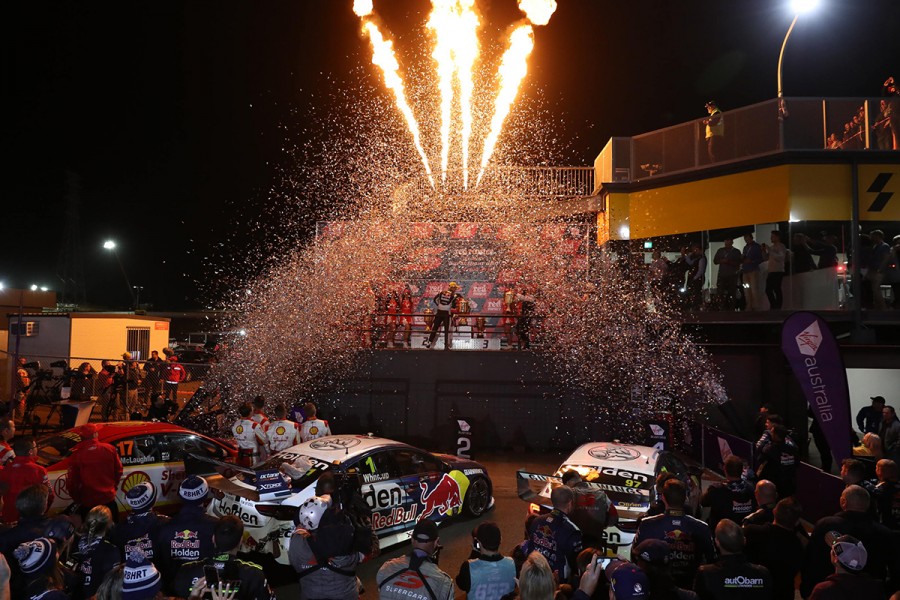 “It took a long time for the race to come alive, it was pretty stale and then the Safety Car came out. It was awesome,” van Gisbergen said.

“Scotty was driving really well, defended awesomely and I gave him a couple of bumps but he wasn’t fazed.

“Unfortunately then I think he had some pick-up and I got through. A one-two for the team is really awesome.”

Polesitter McLaughlin did enough off the line to keep team-mate Fabian Coulthard at bay through Turn 1 on lap one.

During the first stint he edged away from van Gisbergen, who snuck past Coulthard at Turn 6 on the opening lap, with Whincup then finding a way past the #12 Shell Ford starting lap two.

McLaughlin led by 2.1s by lap 15, with Whincup 3.9s behind, and Coulthard and Chaz Mostert both 11s adrift.

The top two pitted together on lap 18, McLaughlin staying ahead of van Gisbergen, with Whincup and Coulthard coming in for the first time one lap later.

From ninth on the grid, Lowndes picked up several places during his first stint, then pitted slightly before the leaders, on lap 16 from sixth.

That got the Autobarn Commodore into third on the road during the second stint, within five seconds of McLaughlin's Shell V-Power Racing Ford.

That was five laps before McLaughlin and van Gisbergen stopped together again, with Lowndes holding a 5.8s advantage following a second undercut entering the final 30 laps. 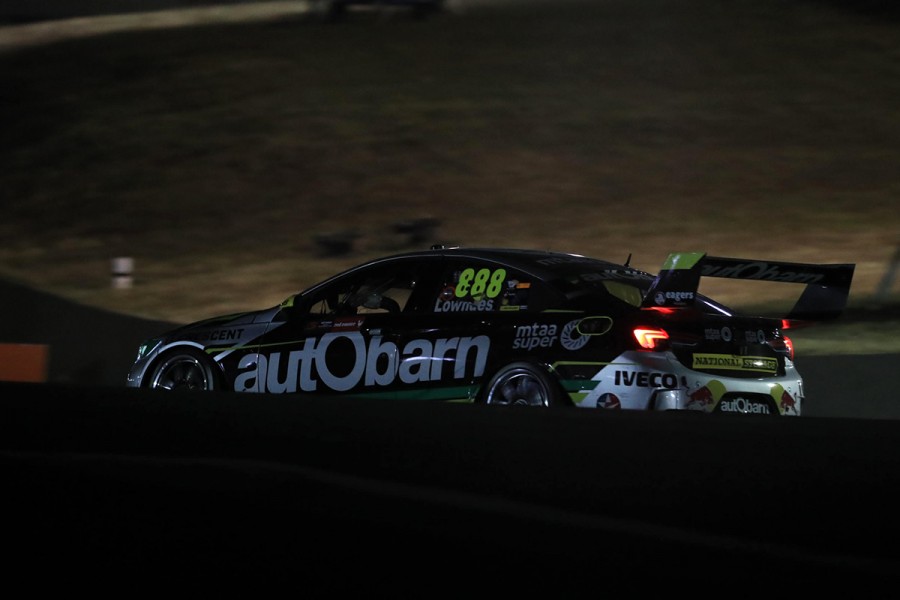 Lowndes' lead fluctuated as he and McLaughlin navigated lapped traffic and they pitted together on lap 54, separated by 4.5s.

The fuel required to get home, however, meant McLaughlin emerged roughly one second ahead of Lowndes.

That gap had been all-but negated when the Safety Car was called with 20 laps remaining, to retrieve Todd Hazelwood's rear wing on the track entering Turn 1.

Van Gisbergen and Whincup pitted together, the latter having to double stack but the pair still lining up third and fourth for the run home.

The race resumed with 16 laps left, and while McLaughlin got the jump Lowndes was caught napping, passed by van Gisbergen on the run to Turn 1.

Their battle – and contact from van Gisbergen on the back of the Shell Ford – briefly let Lowndes and Whincup back into the equation.

A definitive pass came at Turn 4 with 10 laps remaining, and cruised away at the front of the field.

He backed off on the run home to lead over the line Whincup by two tenths in a formation finish, van Gisbergen sealing a fifth win of the campaign.

Unable to go with van Gisbergen, McLaughlin then found himself under pressure from Whincup, who got past Lowndes shortly after the restart.

Whincup, whose night started with a battery change on the grid, harassed his 2017 title rival until making a move stick at Turn 7 with four laps remaining.

“I was pretty lucky to get going at the start, I had a flat battery and thought it was going to be all over before it even started,” Whincup said.

“Thankfully I got a bit of a bump-start, the car started, and it was great strategy by the crew. A one-two, happy days.”

McLaughlin ultimately settled for the final spot on the podium, his 16th from 21 races this year, with Lowndes fourth, to move into fourth in the standings. 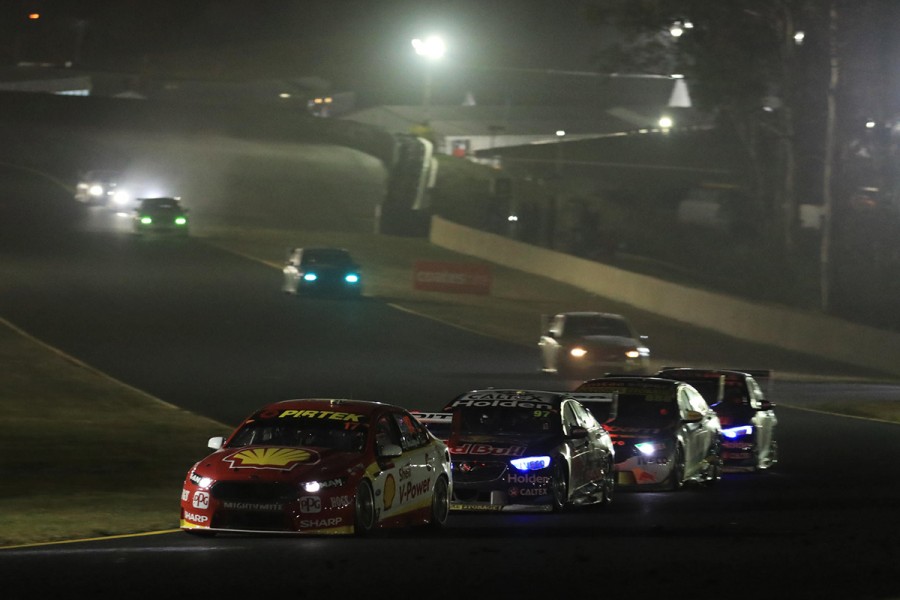 “I tried so hard to keep them behind. Sorry to the Ford fans I couldn’t get it done for you, I’m absolutely gutted,” McLaughlin said.

“We had a great car today, had a great team, great pitstops and great strategy, unfortunately the Safety Car came at the wrong time.

“But it’s a good points day and we’ll move on.”

Mostert took fifth in his Supercheap Auto Falcon as the best of the cars beyond Triple Eight and DJR Team Penske.

The Tickford Racing driver could not quite go with the lead quartet on pace but kept his nose clean throughout the 300km of racing.

In that group, Percat was one of the big movers for Brad Jones Racing, while top rookie Le Brocq lined up 15th.

Coulthard faded during the evening as McLaughlin played a lone hand against Triple Eight at the top, finishing 11th having been passed for 10th late by Tim Slade.

Slade regrouped from being spun at Turn 2 in the early stages by Cameron Waters, the Tickford Racing driver serving a 15-second penalty and finishing 19th.

Lee Holdsworth took 12th, ahead of James Golding, who recorded the best result of his rookie season, Simona De Silvestro and Mark Winterbottom.

The Mobil 1 Boost Mobile Racing Commodores spent the bulk of the evening in the top 10, with Scott Pye the effective leader momentarily after making an early first stop.

However James Courtney and Pye both suffered identical left-front suspension problems with 26 and then 24 laps remaining.

Courtney retired, while Pye was the last classified runner, 14 laps down in 25th after repairs.

Hazelwood also found trouble, his Bigmate Falcon shedding its rear wing at Turn 1 with 20 laps to go, causing the only Safety Car period.

With a replacement wing fitted, Hazelwood got back out to finish 23rd, ahead of a delayed Andre Heimgartner and Pye.

The Virgin Australia Supercars Championship continues with the inaugural OTR SuperSprint - The Bend, on August 24-26.