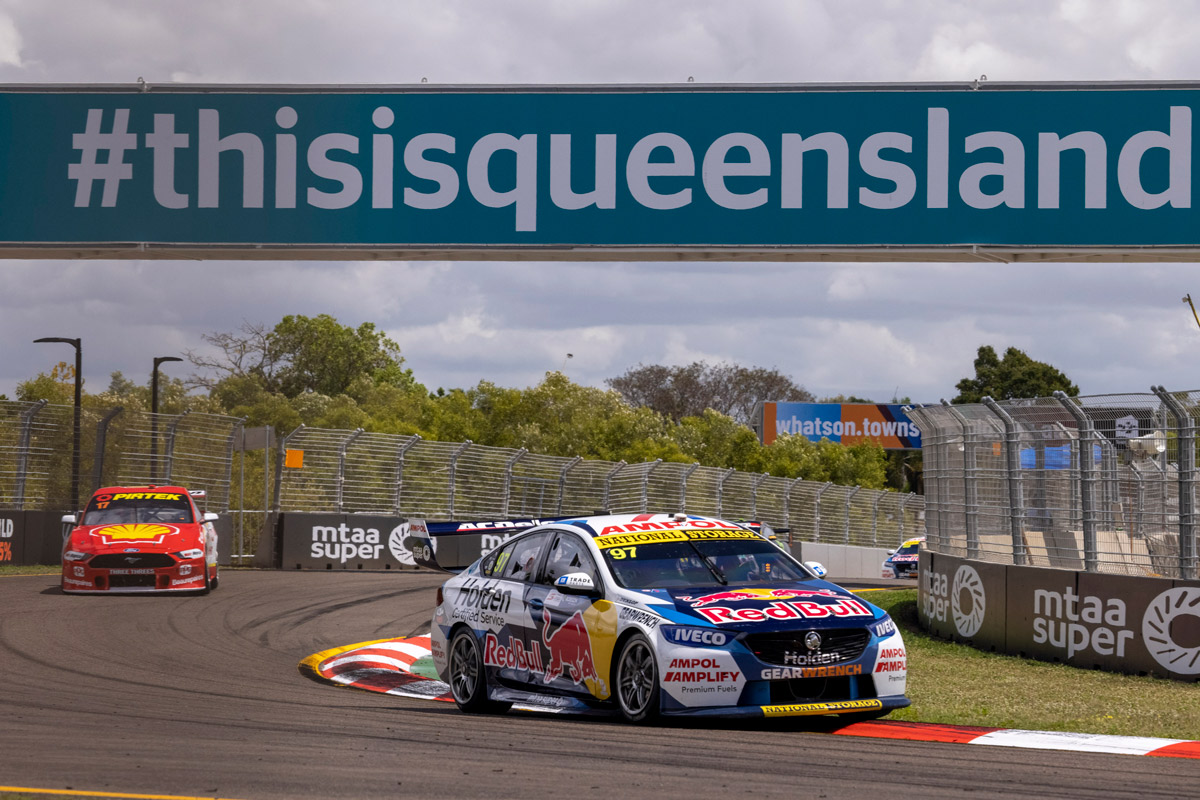 Shane van Gisbergen bounced back from a disastrous Saturday to score a breakthrough win in the second race at the Robson Civil Projects Townsville SuperSprint.

The Red Bull Holden Racing Team made a strong start from fourth on the grid, taking Cameron Waters off the start and Scott McLaughlin around the outside at Turn 2.

Van Gisbergen then set about harassing polesitter Nick Percat until finding a way by at Turn 13 on lap seven and easing away.

The Kiwi pitted for four tyres on lap 17 – two laps after McLaughlin and teammate Jamie Whincup took three each – and was effectively unchallenged for the duration.

Percat stayed out for another four laps but rejoined behind not only van Gisbergen, McLaughlin and Whincup, but Todd Hazelwood – who took two tyres on lap 16 – and early-stopper Jack Le Brocq.

Percat made short work of the latter pair, but could not fight his way back to the podium.

It is also a 200th Supercars Championship race victory for Triple Eight – Roland Dane’s outfit becoming the first team to achieve that feat.

“It feels good. The weeks we’ve had, my crew has never given up and to get a win like that, we smoked them, it was awesome,” said van Gisbergen.

“We put the [tyre] pressures up a little bit so we were strong at the start and I just knew I had to get him [Percat] before everything overheated.

“It was pretty aggressive, but we got it done. It was a really cool race. Two-hundred wins for Triple Eight, what a great feeling.”

Asked of the start, McLaughlin added: “Risk versus reward. Obviously, Shane can risk a little bit more, but we’re in a pretty good spot at the moment.

“I just slotted in there. If you go the outside sometimes you get muscled out… I was playing it pretty safe, but I’m pretty happy.”

Percat meanwhile was disappointed not to convert pole and a strong start into victory.

"I knew pretty early that we wouldn’t have the long game like the three on the podium,” he conceded.

“It’s close, we’ve ticked the box in qualifying, we’ve got that a bit better and we’ve been tuning the race car hard since last week.

“We’ve closed the gap but we need another chunk.”

Waters took a solid fifth ahead of Scott Pye, who continued to show impressive race pace, running a long first stint on his way from 11th on the grid.

Hazelwood took the flag seventh but had been given a 15-second time penalty for a pitlane infringement, dropping him to 14th.

“As soon as I dropped and started loading up the clutch I felt that the pit limiter wasn’t on, so for whatever reason it’s turned itself off when the car was up in the air,” he said.

“It was a bit of a rude shock and I turned it on as soon as I could, but unfortunately got the penalty.”

Like Team 18 stablemate Pye, Mark Winterbottom was also on the charge, dragging ninth from a 19th place grid slot.

Mostert held out Rick Kelly in the closing stages, copping a hit from the Castrol Mustang at Turn 11 that slowed both cars and ended up with David Reynolds into the back of Kelly.

Reynolds dropped to 15th as a result, one place ahead of teammate Anton De Pasquale, who started 23rd on a difficult day so far for the Penrite Holden team.

Fabian Coulthard was another to struggle, falling four places from his 16th place qualifying position.

McLaughlin now leads the championship by 149 points over Whincup, with Waters overtaking Mostert for third.