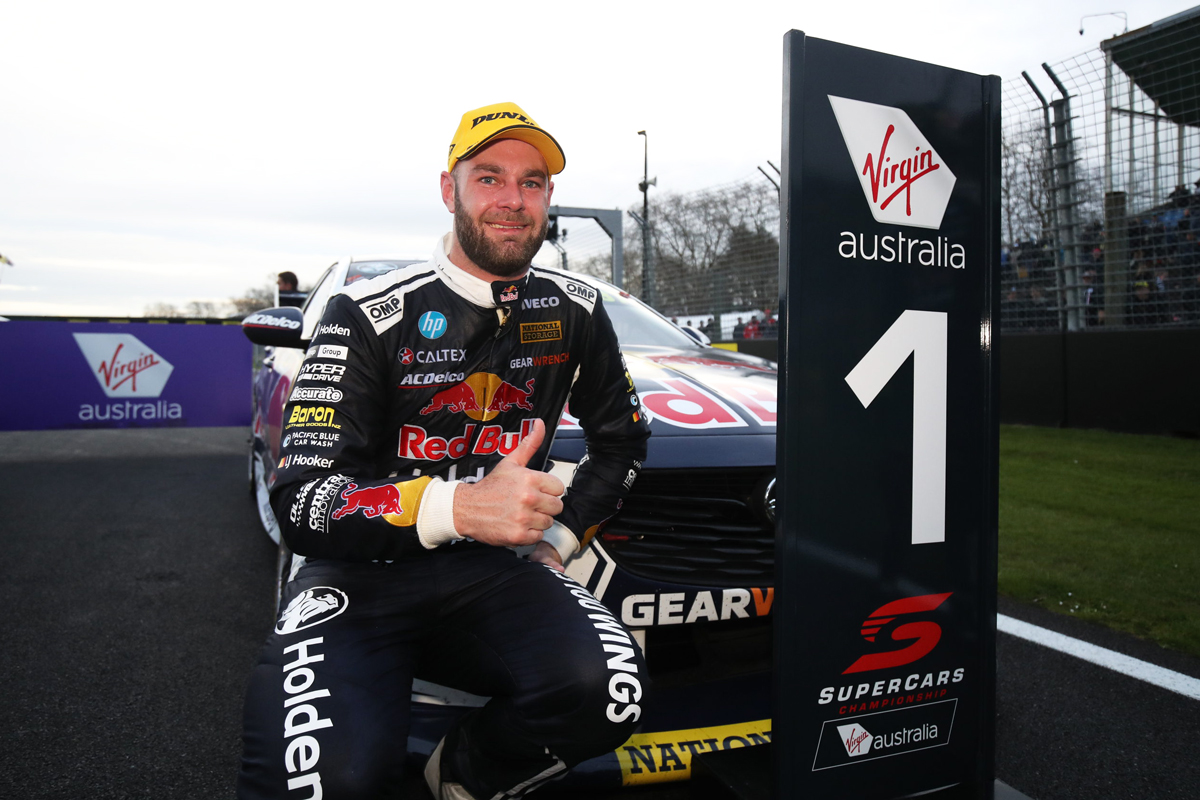 Van Gisbergen sublimely navigated a 200km in which the order was shuffled by an early Safety Car, to convert ARMOR ALL Pole into his third win of the season.

Whincup leap-frogged his way from 12th on the grid to second, but a lap two tangle with Nick Percat is the subject of a post-race investigation.

Will Davison finished third on the road but was demoted to ninth due to a 15-second penalty of his own for speeding in pitlane.

That handed the final podium spot to Cameron Waters, who survived a clash with teammate Chaz Mostert that forced the Supercheap entry into the pits for some lengthy repairs.

A popular winner on home soil, van Gisbergen said: “I was a bit worried there in the middle, and at the start when we had all those Fords [pushing us].

“But all the support here just makes you lift. You come here and it’s just an awesome feeling to have so many Kiwi fans.”

Whincup meanwhile defended his part in the incident with Percat: “I’ll go and speak to him straight away, but there wasn’t much I could do.

“I was bottled up, stopped in the middle of the corner and he came back down a lot harder than I expected.”

Van Gisbergen had made the most of his pole position to lead the Mustangs of Waters, Davison, Mostert, Coulthard and McLaughlin off the start.

Initially struggling to keep Waters at bay, the Red Bull Holden driver eased away to a two-second lead when the Safety Car was called on lap 14.

That was to retrieve Mark Winterbottom’s IRWIN Racing Holden, which had run out of fuel and parked at the hairpin.

That triggered a flurry of pitstops, with van Gisbergen emerging behind Fabian Coulthard, Anton De Pasquale, Whincup and Andre Heimgartner, who had each taken service before the yellows.

Whincup – having spun Percat at Turn 8 on lap two – had pitted on lap seven to get out of traffic, taking on a short first fill of fuel.

The seven-time champion marched to the front in the second stint, taking De Pasquale just after the restart, before moving to the lead when Coulthard slid wide at Turn 4 on lap 24.

Whincup then set about building a margin, knowing he had more fuel to take on at his second stop than early leader van Gisbergen.

The gap between the Red Bull cars was 10 seconds by the time Whincup pitted on lap 37, getting away with a major lock-up on pit entry.

Van Gisbergen was in three laps later and rejoined with the effective lead narrowly ahead of Whincup, who was subsequently told to hold station.

Moments earlier, another pair of teammates – Tickford duo Cameron Waters and Chaz Mostert – clashed while battling it out for an effective third.

Waters had rejoined from his second stop alongside the Supercheap entry – the duo running side-by-side into Turn 5.

A lock-up from Waters into the right-hander triggered contact with Mostert, breaking the latter’s steering and sending both across the grass.

Tickford team boss Tim Edwards was quick to label the fracas as “stupid”.

“Unfortunately Chaz was up the outside. He should have just conceded,” he added. “The pair of them shouldn't have been fighting that hard.”

Davison overtook Waters soon after, but was racing with a 15-second time penalty hanging over his head for speeding in pitman.

Davison’s penalty lifted Reynolds to fourth ahead of the Mustangs of McLaughlin, Holdsworth and Coulthard.

The Shell V-Power Racing duo had an uncharacteristically quiet afternoon and were both overtaken by Reynolds in the opening stint.

All five Kiwis finished in the top 10, with Andre Heimgartner eighth and Richie Stanaway a season-best 10th.

Percat recovered from the Whincup tangle to finish 12th, one place behind teammate Tim Slade.

Mostert returned to the track in the closing stages to score points for last place, but has dropped behind van Gisbergen and Coulthard to be fourth in the standings.