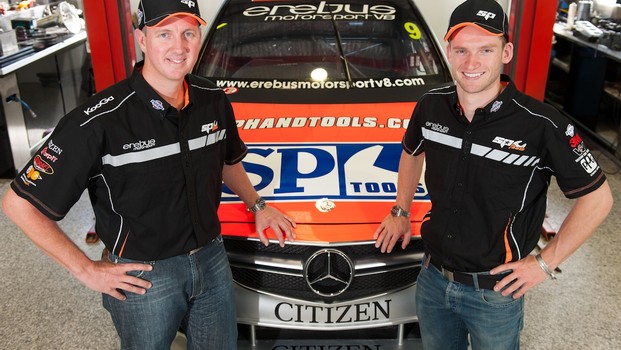 For the first time in V8 Supercar the history racingstalwart Steve Johnson will not be driving a Dick Johnson Racing prepared carwhen he lines up for the endurance season. Instead he will be joining theErebus Motorsport V8 (EMV8) team and co-driving with #9 SP Tools Racing driverMaro Engel.

The 2013 Endurance Championship season comprises of theSandown 500 in Victoria, the iconic Supercheap Auto Bathurst 1000 at Mt Panorama in New SouthWales, and the ARMOR ALL Gold Coast 600 in Queensland.

Johnson said he is now in a position where he can concentrateon what he loves most – racing – keeping in with the 39-year tradition of theJohnson family name lining up on the grid at Bathurst.

“Today’s announcement about me driving for Erebus MotorsportV8 in the endurance series is really exciting for me. For all my career I’veraced for Dick Johnson Racing under the Ford banner, so I’m now not onlydriving for a different team, I’m also driving a different marque of car.

“Of course my decision not to drive at DJR was a big one,but I believe the opportunities the team has to develop young talent will be abig focus as DJR re-emerges. It is important they capitalise on theseobjectives and in turn I can concentrate my attention on the long distanceraces. I will have no other hats on andI can concentrate 100 percent on doing the best job I can with the Erebus team andwith Maro.

“It’s going to be very interesting for me to see how anotherteam operates and I’m hoping this will help me further develop as adriver. Working with new people andforging new relationships in such a short time is going to be an enjoyablechallenge.

“In the past I’ve been renowned as an endurance specialist,so I’m expecting to do well. I think theSP Tools Racing entry will have some strong results over the endurance series. Maro has certainly done a lot of racing in hiscareer and he is a world-class driver. Hopefully I can help him learn the tracks, in particular Bathurst, butI’m sure there are many things he can also teach me.

“It will definitely be a team effort, both Maro and I arehere to do well and we are really looking forward to working together."

“It’s hugely exciting news to have Steve on board as myco-driver. It’s going to be his 19th Bathurst and he has a long successful career in racing and a very good trackrecord at endurance races," Engel said.

“I’m looking forward to working with him closely to ensurewe can be as competitive as we can be. I’m sure he will have some secret tipshe can share with me about all three endurance tracks – especially Bathurst,which I like to refer to as the ‘Blue Hell’ because it is the Australianversion of Nurburgring Nordschleifewhich is known as the ‘Green Hell’.

“Ithink I’ll be able to learn a lot from Steve so I’ll be listening verycarefully to all his advice and comments. In terms of car development, I think he will also be able to give usgreat feedback as he has driven a number of new V8 Supercars over the years.

“Theendurance races are the most exciting part of the season with Bathurst beingthe pinnacle and now with Steve on board I am really looking forward toit. We want to get good results andalthough it is my first time at all these tracks I’m sure we will counteractthat with Steve’s huge amount of experience."

“Weare very pleased to be able to sign Steven Johnson for our endurance driverline up," Maddison said. "Steven will be a strong co-driver for Maro in the #9 SP ToolsRacing entry with his extensive experience, and this will allow the team tofocus on strategy to get the most from the driver pairing.

“Ithink the rookie and veteran combination of Maro and Steven will work very welland their individual strengths will complement each other as they work closelytogether over the next few months.

“With18 Bathurst’s to his name there are few who can support Maro in his first yearthe way that Steven will. (Team owner) Betty (Klimenko) is equally pleased to see Stevencompete in this year’s V8 endurance events with the Erebus Motorsport team."

06/06/2013
Related Content
15' Erebus Motorsport ›
2013 Wilson Security Sandown 500  ›
2013 Supercheap Auto Bathurst 1000  ›
2013 Armor All Gold Coast 600  ›
Stay In The Know
Sign up to the Virgin Australia Supercars Championship Newsletter
This website uses cookies to improve your user experience. By continuing, you will be providing your consent to our use of cookies.Ok