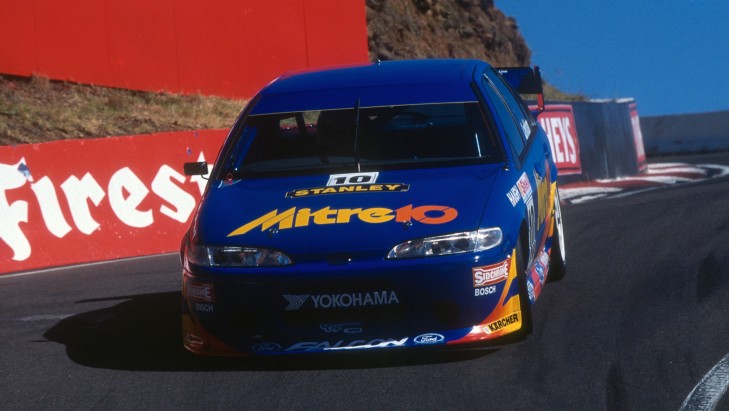 THESEDAYS V8 Supercar fans know Mark Larkham for his work on Channel 10's V8 Supercar and motorsport telecasts, but 20 years ago he made his debut in V8 Supercars - then known as five-litre touring cars or just 'V8s'.

A graduate of Formula Ford and Formula Holden open wheelers, 'Larko' and his Mitre 10-backed team took a unique approach to the category and built their own Falcon EF, drawing upon plenty of open wheeler thinking and engineering know-how to do it.

Our V8 Sleuth Aaron Noonan gets plenty of email and quite often there is mail relating to Larko's Falcon - given it's now 20 years since it first appeared we thought it was a great time to re-visit the topic.

The car featured a range of features that were perhaps simply before their time in the category - one of the main ones being that the driver essentially sat in a monocoque within the car and towards the centre; very different from the other cars of the period.

It endured a range of delays before finally debuting at round three of the 1995 Shell Australian Touring Car Championship at Bathurst. It still suffered all sorts of problems and ran very slow laps for the weekend. 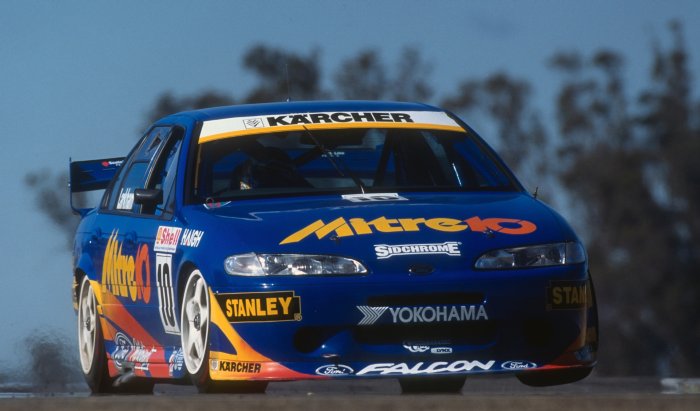 Larkham drove the blue Ford for the remainder of the season, including being joined by Warwick Rooklyn for the endurance races.

Larko retained it for 1996, where things did improve and Cameron McConville joined him for the enduros.

But typical of Larko's luck of the time, the car was wiped out at Bathurst early in the race when he was unsighted in the terrible rain and crashed out. 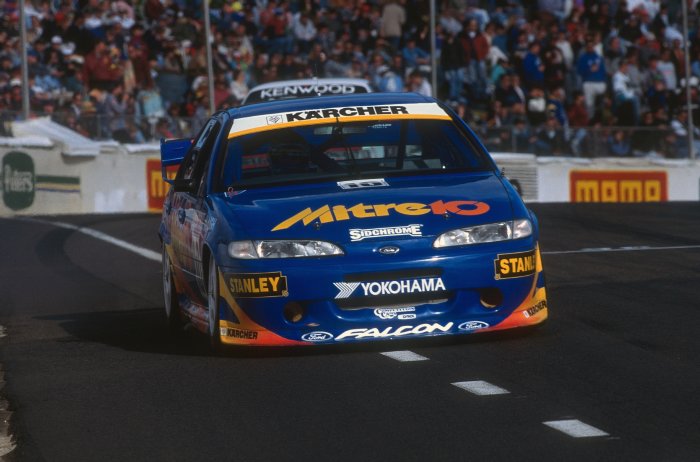 A move to run a car out of the Stone Brothers garage (which still at the time was actually Alan Jones Racing prior to the Kiwis buying out the former F1 champ) saw Larkham move into one of the Stones' cars and this car remained idle.

It was never raced in 1997 before being sold to the Colourscan privateer team in mid-1998 and run as a second car, now updated to EL specification with Brett Peters driving.

He and Danny Osborne raced the car at Bathurst in '98 but didn't finish with diff problems. 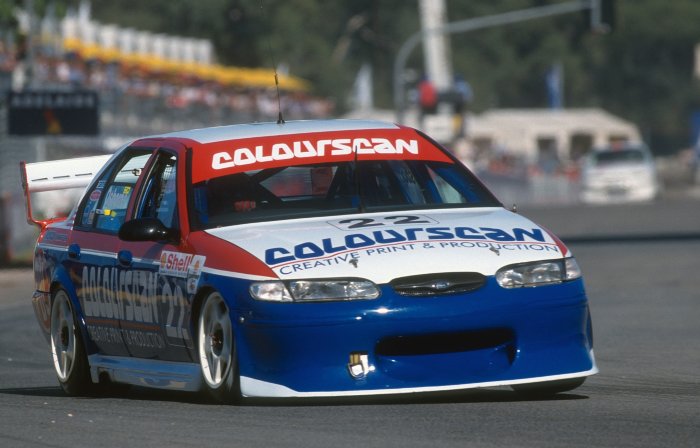 Osborne returned to drive the car in 1999, but was tagged by Craig Lowndes in the inaugural Sensational Adelaide 500 on the Saturday and fired hard into the concrete wall.

The hit completely destroyed the car, injured Osborne and meant that Larko's old baby was destined for the scrap heap.

Osborne confirmed to our V8 Sleuth a few years back that the damaged chassis went to the Ithaca campus of the Brisbane North Institute of TAFE after its big crash in Adelaide and was used to train apprentice panel beaters on its remnants!

He kept the steering wheel, a fender and the bent bonnet and whatever else was salvageable was taken for the Colourscan team's new AU Falcon. 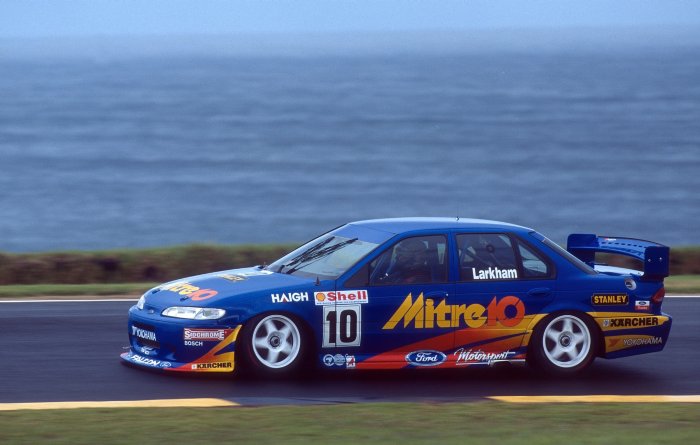 Larkham also has kept a range of interesting components from the car from his team's period of ownership.

"I kept the carbon fibre driver capsule that incorporated the foot pedals and the electrics," recalls Larkham.

"It was a pretty cool device for 1995 but a little bit ahead of its time unfortunately!

I've got a few keepsakes from it, some bits and pieces, including the aluminum hubs that we did that were quite unique.

"It's kind of sad in a way but I take 100 percent responsibility for it. We tried to do way too much too soon but I learnt a very valuable life lesson. There were plenty of good ideas in that car that emerged later on.

"The roll cage was beautiful. It was lighter than anything at the time. Everything on that car came from a blank sheet of paper. I've still got most of the drawings. Pretty much every component we designed from scratch.

"It didn't win anything but in terms of ideas it was ground-breaking. It wasn't until 10 years later that we centralised the driver in V8 Supercars. The DTM (German touring cars) later used a driver cell concept similar to what we had.

"Having been in an open wheeler, I thought why couldn't we have it like a tub with quick disconnects and everything could come out?

"The seat was mounted to the roll cage and not to the floor, which was common then. We used carbon manganese tubing that they were just starting to use in the British Touring Car Championship. It was lighter and stronger than chrome moly.

"The car was designed specifically to be a racing car. It had an extremely low centre of gravity but it did compromise reliability. We grossly underestimated the loads a V8 Supercar encompasses from kerbs and hits with other cars.

"The car was designed from a theoretical load point of view. In practice though it wasn't correct." 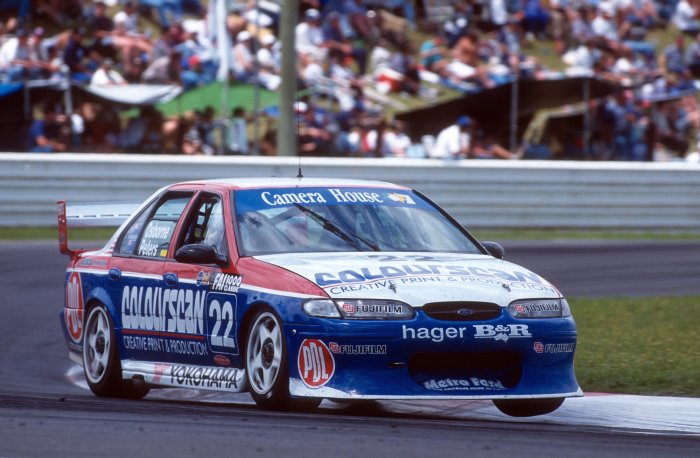 The original Mitre 10 Falcon would later be replaced by Stone Brothers-built examples before Larkham went out on his own again based in Queensland.

He has kept one of his former Orrcon Racing Falcons - but that's another story for another time ...

Saturday Sleuthing returns next week - if you have a suggestion for a car story, some information or want to give some feedback, contact the V8 Sleuth via the following methods:

On this day: Murphy gets his last round win