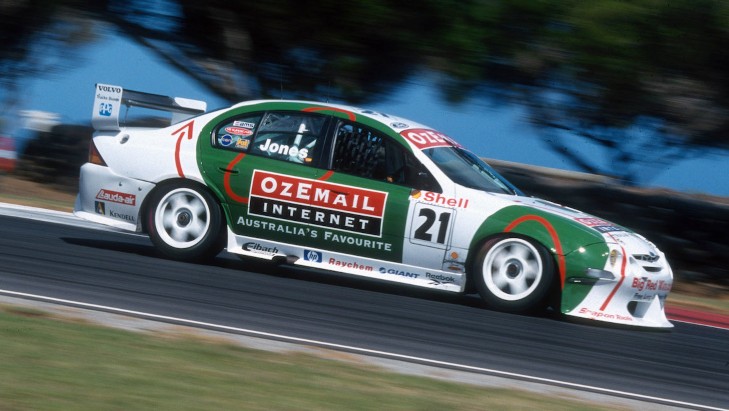 BradJones Racing will debut a brand new car for Fabian Coulthard in the next V8 Supercars Championship round in Darwin on June 20/21, hoping it will follow in the wheel tracks of the car it replaces.

Coulthard's existing VF Commodore (nicknamed 'Tallulah') has reverted to becoming the team's spare after a two and a half year racing career but has a strong claim to being the team's most successful V8 Supercar in that time.

The team's current generation V8 Supercars are perhaps some of the most successful for the Albury team, which has competed in the championship for 15 years since debuting in 2000, firstly in Falcons and since 2008 in Holden Commodores.

But what happened to the team's very first V8 Supercar that started it all back in 2000? 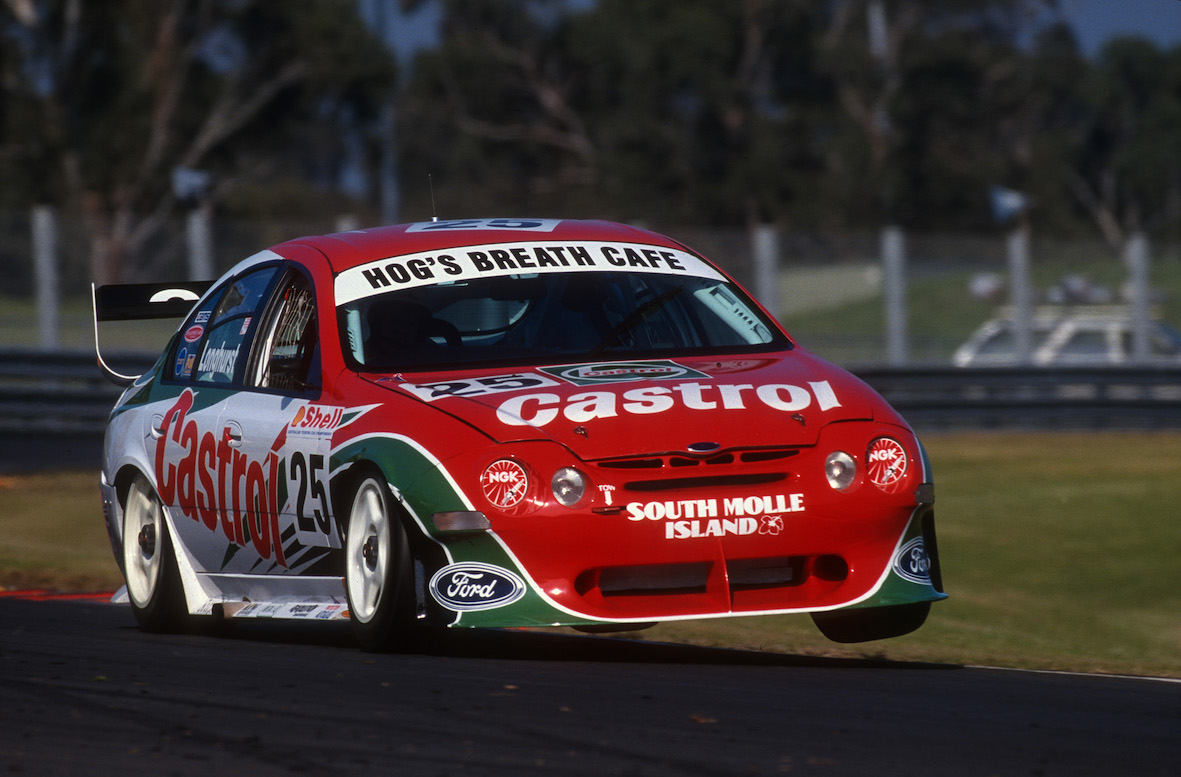 To rewind to BJR's entry point to V8 Supercar racing, you actually have to wind the clock back to 1999 when the team - then racing Audis for the fifth straight year in two-litre Super Touring - made the decision to step up into the 'main game' the following season.

As they were planning to enter, long-time team owner/driver Tony Longhurst was campaigning a single car, Castrol-backed team in the championship.

Having built a new model AU Falcon for the start of the season, his Queensland-based team built a second new AU and it debuted in Longhurst's hands at the Sandown sprint round of the championship.

He drove it for the remainder of the season - including having 1998 Formula Ford champion Adam Macrow as co-driver at the Queensland 500 and Bathurst 1000. 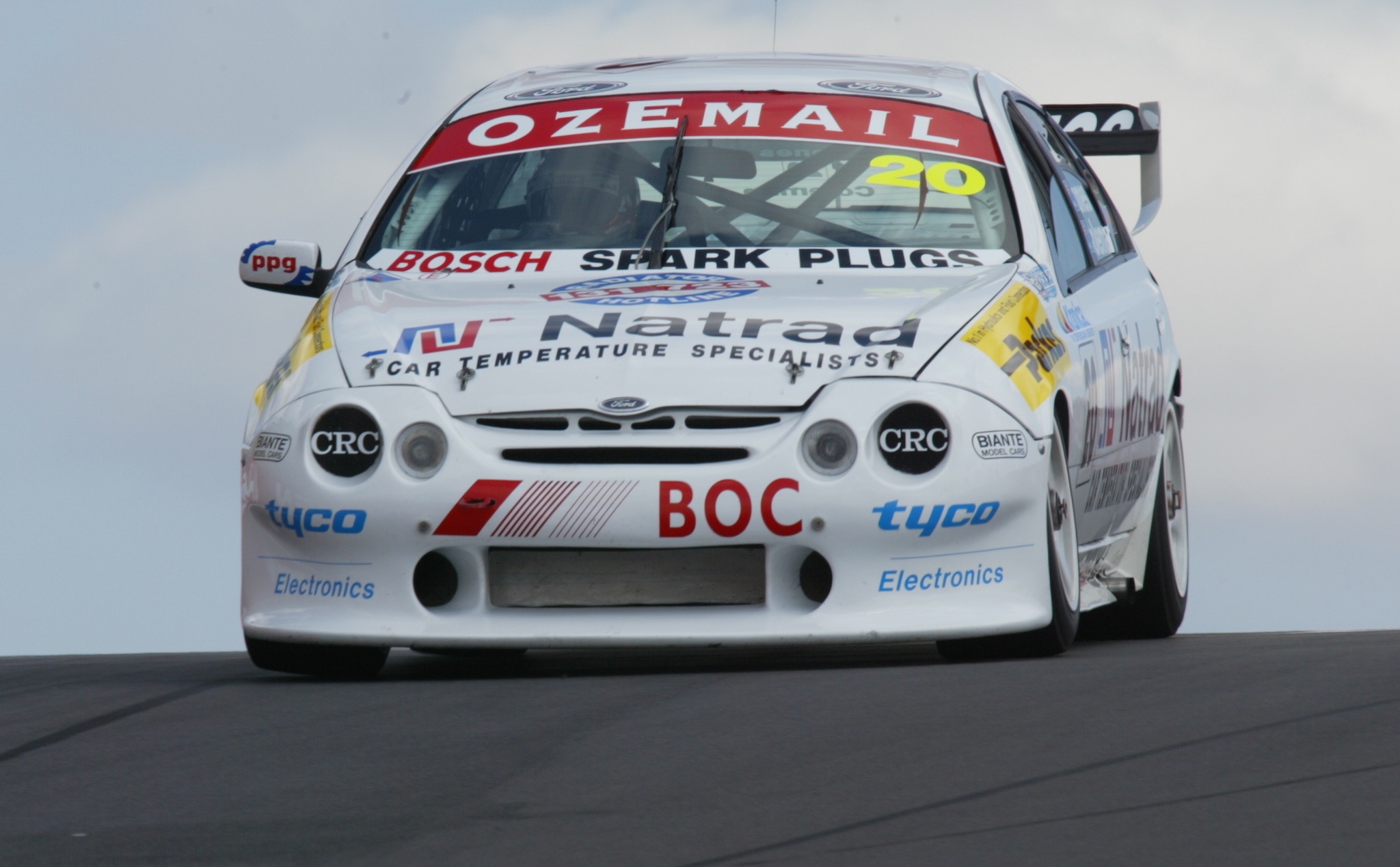 Longhurst sold both his Level 1 franchise and newest car to Jones' team, who took delivery of it in November 1999 and took it to Calder for a test with the main change being swapping the Pi data system to MoTec.

It then became BJR's very first V8 Supercar for the team's debut at the opening round in 2000 at Phillip Island with internet provider OzEmail the team's new naming rights backer for its foray into the category.

The car hit the headlines for all the wrong reasons when Jones competed at the Clipsal 500 in Adelaide, sent into a roll over after clipping a tyre bundle at the infamous turn eight.

The #21 Ford was quite seriously damaged and the roll hoop, A pillar bars, roof and a range of other elements replaced before it could returned to the track.

Jones piloted the car for the remainder of the season, including the Queensland and Bathurst endurance races where former HRT partner Tomas Mezera (who had been racing his own Commodore as a privateer on a small budget) joined as co-driver.

The team retained the ex-Longhurst car for 2001 and Jones drove it in the season-opening, non-championship event at Albert Park in Melbourne before debuting the team's first self-built Falcon in the first round of the championship proper at Phillip Island. 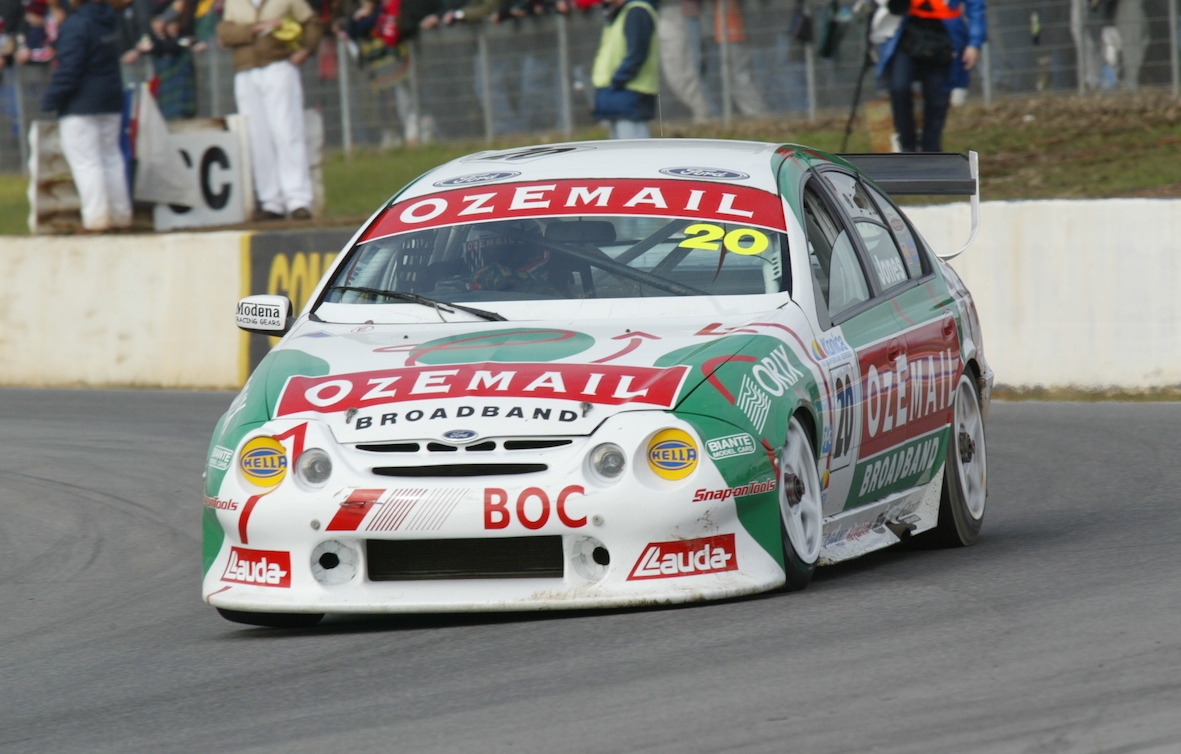 The original car reverted to becoming a spare and was placed on show car duties as well for the rest of the 2001 season.

However it then became the first V8 Supercar for another member of the Jones family - young Formula Ford driver Andrew - who made his debut in it at the Winton round of the Konica (now Dunlop) Series.

He again drove the car in the non-championship, 30-lap Saturday afternoon Konica race at Bathurst as the #20 Natrad-backed entry and it started the 1000-kilometre race on Sunday with Matt Coleman as co-driver only to retire early.

BJR moved on to the new model BA Falcon in 2003 and the original AU model was put to one side before being purchased by now-Australian GT racer Rod Salmon to put on display at his Oneworld Sports Bar in Parramatta, Sydney. 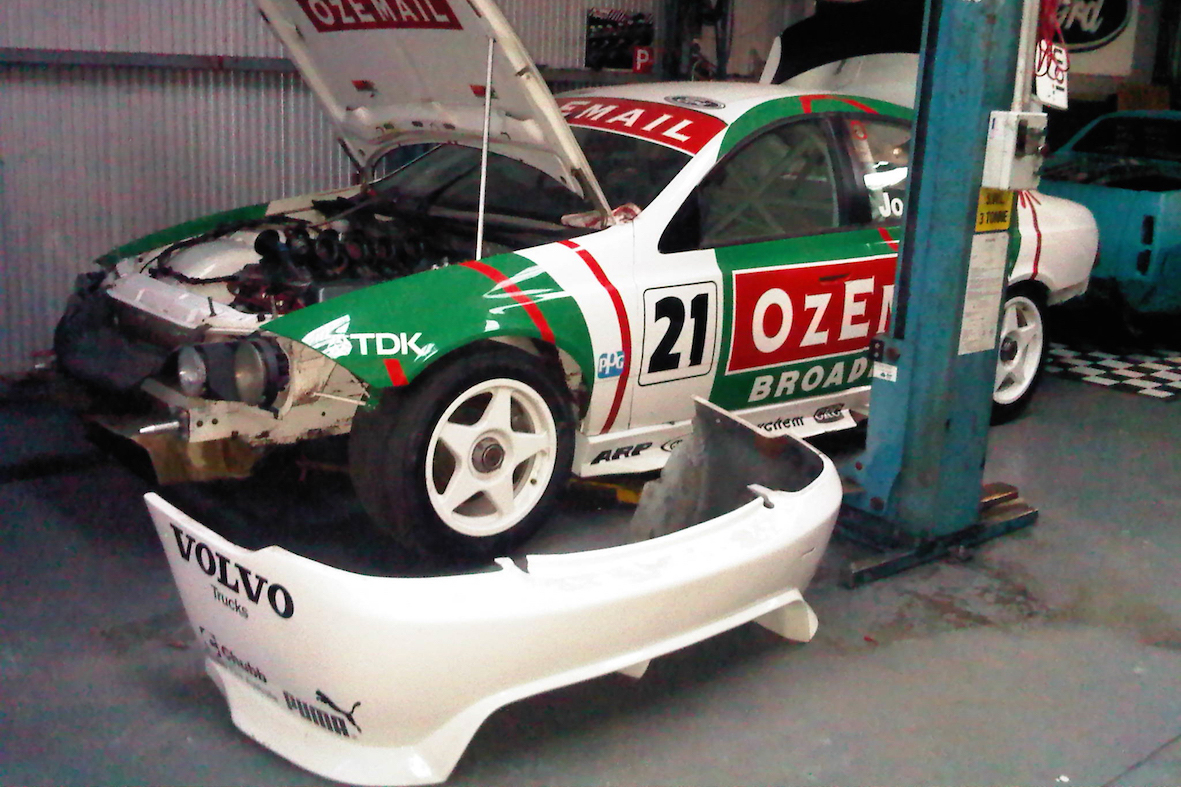 After being on display for quite some years it was advertised for sale in 2010 as a rolling chassis (ie. without engine or driveline) with the need to sell cited as a requirement to make way for a newly built area in the bar to accommodate smokers!

It found a new owner, Anthony Leitch, a few years back, who has been slowly but surely assembling all of the required elements to return the car to the track.

A fuel system has been fabricated, an ex-Stone Brothers engine secured and a complete driveline sourced from BJR itself.

The original BJR V8 Supercar has remained in OzEmail colours and owner Leitch tells us that business commitments in recent times have slowed the progress on finishing off the car.

"It's not that far away from running, it's been parked for a little while," he told our V8 Sleuth.

"But it's pretty much all together. All the tanks and pumps are back in the boot, the engine is sitting in it, all the diff and brakes are done, we just need to get a few small elements done.

"I did a lot of work on it late last year but since January I haven't done a great deal with it."

Regardless, it's still great know that Brad Jones Racing's first V8 Supercar is still alive and well and hopefully we see it back out on the track sometime soon.