Shell V-Power Racing's Scott McLaughlin claimed a comfortable 11th victory of the 2019 season in the opening leg of the BetEasy Darwin Triple Crown.

With the results, McLaughlin extends his championship lead over team-mate Coulthard to 298 points.

“I think we were three-wide before I braked. I figured I was on the inside so I had probably the safest position.

“So stoked for everyone at Shell V-Power Racing, it’s been an awesome run, we’ve got to just keep pushing on.

“Unfortunately my engineer Richard [Harris], his father passed away in the early hours of this morning, so this is for him.

“He’s had to head back to the UK. I’m not really worried about the Triple Crown now, just the welfare of my boys.”

Polesitter McLaughlin kept the lead through Turn 1, on the inside of the Penrite Holdens; Reynolds in the middle and Anton De Pasquale on the outside.

Will Davison capitalised on Reynolds being forced slightly wide to set up a move for second exiting Turn 5, as McLaughlin cleared out at the front.

He led by 1.4s on lap three when the Safety Car was deployed, and built another gap in no time after the restart on lap eight.

McLaughlin was 3.1s up by the time Davison and Reynolds pitted together on lap 19.

Davison's Milwaukee Mustang was released into the path of Reynolds and after contact had to yield and file in behind.

The race leader came in one lap later and emerged with Mostert second in the effective order, thanks to an undercut from pitting on lap 15.

McLaughlin then managed his buffer over Tickford Racing's Mostert, taking the 36th victory of his career and fourth in a row.

Mostert and Reynolds were joined by Cameron Waters in the closing laps, Waters having run long and made his pitstop on lap 24.

Reynolds was unable to mount a serious challenge on Mostert, and instead had to fend off Waters on fresher tyres.

He did enough to keep third, the trio separated by 1.4s at the line.

With the race results, Reynolds and Mostert both gain a place in the championship, moving into third and fifth. 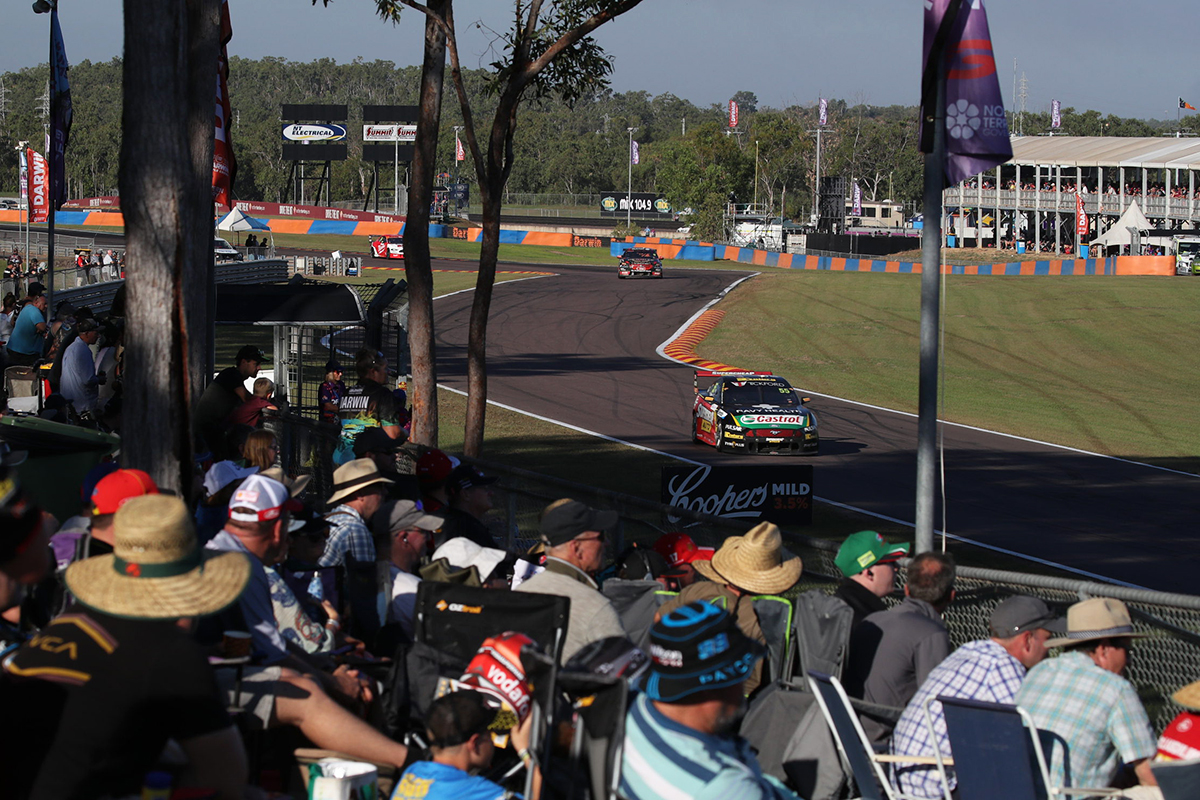 “I was quite surprised,” Mostert said of his rise from sixth on the grid.

“Adam [De Borre, engineer] called me quite early and there haven’t been a lot of races over the last couple of years where we’ve had good tyre life

“Scotty is still super-quick, we’ve still got a bunch to find to him, but I just tried not to slide the car, it was a tough job.”

They rejoined seventh and 10th in the effective order and got up to fifth and eighth on the run home.

Between them, Lee Holdsworth finished sixth and Coulthard seventh.

A 15-second time penalty for an unsafe release was issued to Davison, who faded to cross the line ninth and then fell to 12th.

De Pasquale was the first to pit, from fifth ahead of Mostert on lap 14, but a slow right-front wheel change meant he fell to finish 11th after Davison's penalty.

All three limped back to the pits, while Tim Slade was another retiree on lap two.

Slade's Freightliner Holden was sent into the fence on the run to Turn 6 after a touch from Rick Kelly's Castrol Nissan.

Kelly then had to take evasive action as Mark Winterbottom and Andre Heimgartner touched exiting the final corner.

That bunched a busy pack, from which Simona De Silvestro helped Todd Hazelwood off the road at Turn 1.

For the incident with Slade, which caused the Safety Car, Kelly was handed a drive-through penalty and finished 21st.

Heimgartner got a 15-second penalty of his own for a restart infringement and wound up 17th, with rookie Garry Jacobson in 14th the best of the Kelly Racing Nissans.