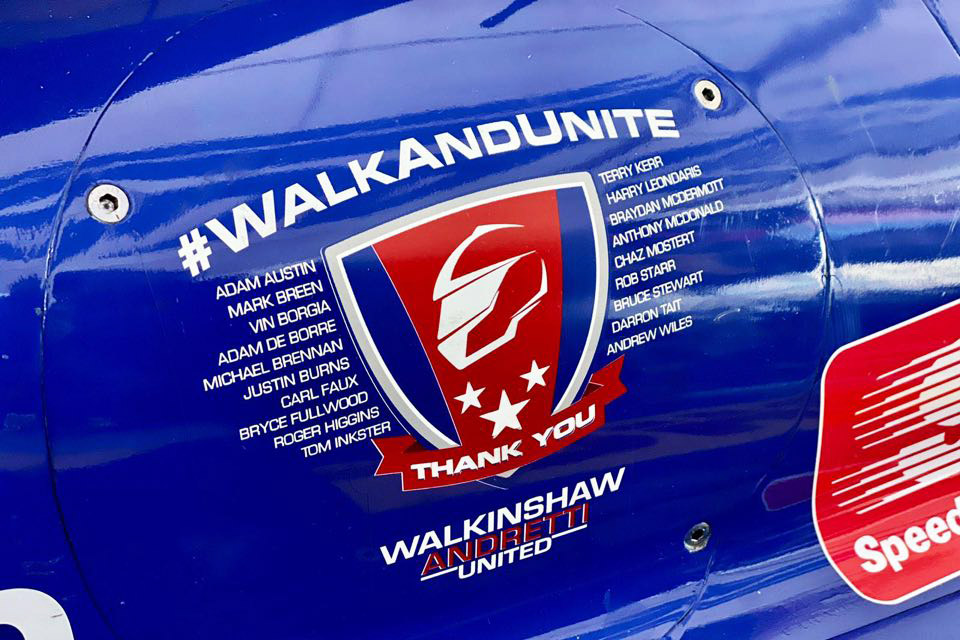 Andretti Autosport has unveiled a special tribute to recognise the efforts of their sister team to keep the 2020 Supercars season going.

Walkinshaw Andretti United is one of five Victorian-based teams to have been on the road since early July, exiting their home state before borders were shut.

It’s made for a taxing trek around the nation, to the point where just one event remains: the Supercheap Auto Bathurst 1000 on October 15-18.

As tribute, Andretti Autosport will run special badges – featuring the names of WAU squad members – on their five IndyCar entries at the Harvest Grand Prix at Indianapolis Motor Speedway this weekend.

“When COVID struck, our Walkinshaw Andretti United team had just hours notice to pack and hit the road before the borders closed,” read Andretti Autosport’s post.

“…And they’ve been away from home for the now 88 days that have followed, with another 19 days to go.

“To these teammates, we say thank you.

“We are grateful for your dedication and thankful for your hard work – you’re all riding with us this weekend.

“Thank you for keeping us racing!”

Among Andretti Autosport’s drivers in action this weekend are Alexander Rossi and James Hinchcliffe; both of whom contested the 2019 Bathurst 1000 as a WAU wildcard.

Despite the circumstances they’ve been dealt, WAU has tallied five podiums this year, including four for Chaz Mostert and one for rookie Bryce Fullwood.