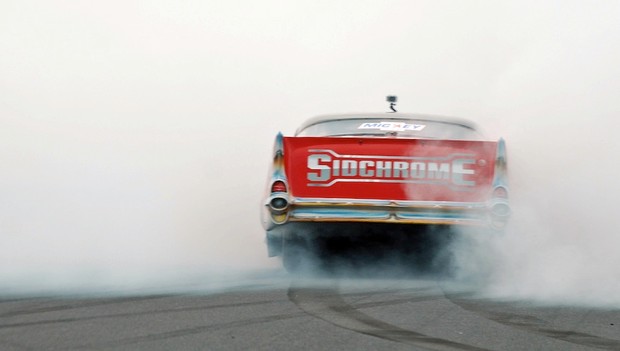 With lessthan 60 days until Darwin's SKYCITY Triple Crown event, it has been confirmedTeam Bray Racing will be part of the official on-track entertainment,delivering their signature smoky burnouts to the delight of V8 Supercar fans.

TBR'sVictor and Ben Bray have previously been a 'must-see' part of the entertainmentprogram at many V8 Supercars events around the country, with theirrubber-burning performances earning them a solid reputation amongst race-goers.

Now TBR isdelighted to confirm that with the help of SKYCITY Triple Crown event promoterNorthern Territory Major Events, both Victor and Ben are set to deliver theirsignature thrills to race fans at Hidden Valley Raceway across June 14 to 16.

"Wehave had some fantastic times at V8 Supercar events around the country and weknow the fans absolutely love what we do with our burnout cars, so I amabsolutely stoked to be officially signed up for the Hidden Valley Racewayevent this June," Victor said.

"Ithas been two years since we smoked them up at Hidden Valley, so I am reallylooking forward to getting back to the track and putting on a good show for thefans."

"Victorand I have known each other for many years and I can tell you – there is noneed to sell the name Victor Bray in the Northern Territory, he is very wellknown here. I know the fans are going to come out in droves to see him and Ben inaction each day of the SKYCITY Triple Crown," Cattermole said.

"Theevent is shaping up to be absolutely fantastic as always, and if you haven'tbeen to Hidden Valley before I really can't encourage you enough to come andexperience it. When you arrive it is like a mirage, it is just a beautifulfacility and one of the jewels of Australian motorsport.”

Victor andBen Bray will be on track in their Sidchrome burnout cars for each day of theSKYCITY Triple Crown at the Northern Territory's Hidden Valley Raceway acrossFriday June 14 to Sunday June 16, 2013.

05/04/2013
Related Content
2013 SKYCITY Triple Crown  ›
Stay In The Know
Sign up to the Virgin Australia Supercars Championship Newsletter
We use cookies to ensure that we give you the best experience on our website. If you continue to use this site we will assume that you are happy with it.Ok