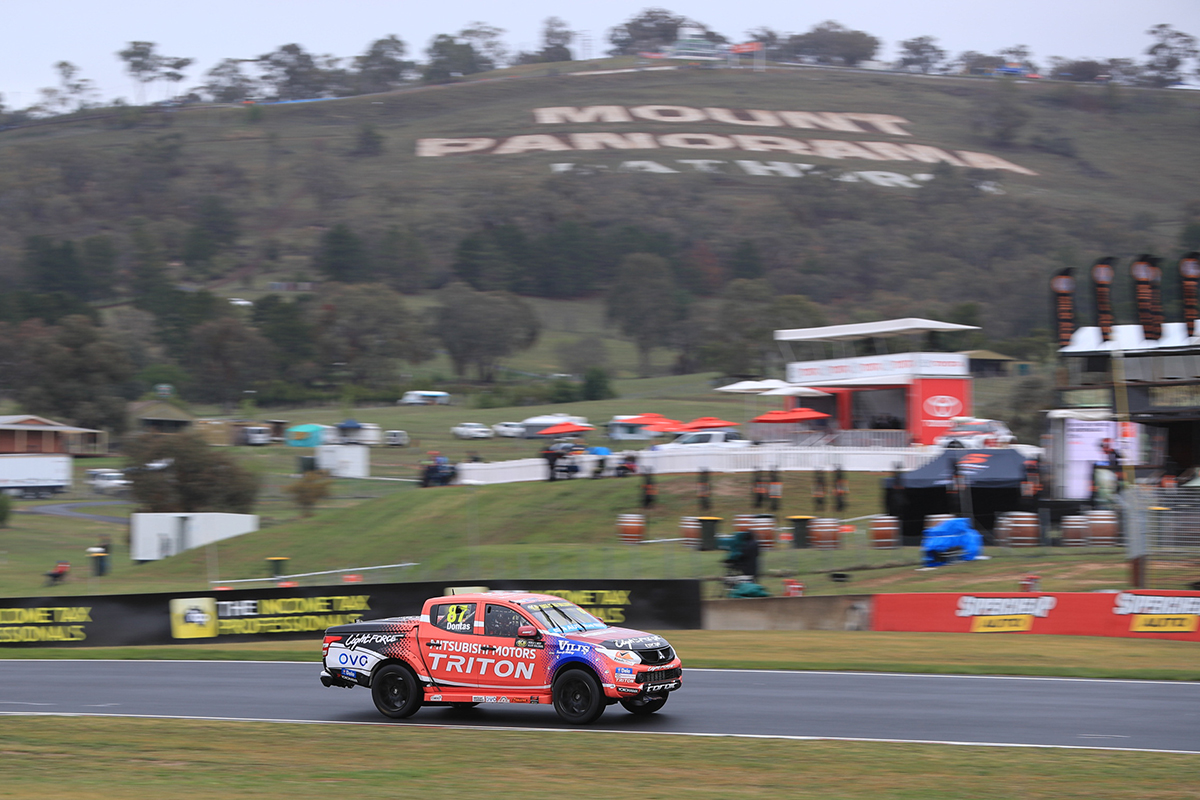 Craig Dontas has secured ARMOR ALL Pole Position for the opening race in the ECB SuperUtes Series, after escaping a frightening moment at Mount Panorama.

As was the case in Thursday practice, the rain continued to lightly fall in qualifying, with the conditions not easing throughout the session.

Running time was shortened after Tomas Gasperak’s Holden faced mechanical dramas, stopping at The Cutting with smoke pouring from his Colorado after five minutes elapsed.

The session resumed with less than nine minutes remaining; Ryal Harris subsequently setting the early pace with a 3:06.4861, as Craig Dontas almost found the wall at The Chase.

Dontas lost the rear of his Mitsubishi on the way into The Chase, sliding backwards through the fastest section of the circuit and coming to a halt the wrong-way round.

He regrouped to take the top spot on his second attempt, setting a 3:06.0967s after the chequered flag had flown, just 0.0702 seconds clear of Harris.

“I had a good tow from Mick (Sieders) down Conrod Straight, which meant my entry speed was higher than it had been before," explained Dontas of his spin.

“I hit the white line on entry, and it was enough to unsettle the car. At that point, all I was thinking about was keeping it off the fence.

“I regained my composure and I was able to put in a solid second lap. I made a few mistakes over the top, so I was actually surprised it was good enough for pole.”

Harris will start alongside Dontas in second, surmising that "the car is good over the top, but Craig (Dontas) in the Triton has more speed going up the hill".

“Coming over the top, all of a sudden there was just no drive so I stopped in the Esses," he explained.

SuperUtes debutants and former V8 Ute Series winners Kim Jane and David Sieders will start side-by-side on the fourth row of the grid in eighth and ninth respectively.

Matthew MacKelden rounded out the top 10 ahead of Christopher Formosa, debutant Charlotte Poynting and Gasperak, who wasn’t able to set a time.

Gasperak later said: “Heading up to the Cutting, there was a big bang and all the air rushed out of the turbo. There was lots of white smoke, so I pulled over straight away.

“Hopefully the turbo is the only thing that’s failed, then we should be right for Race 1."

The opening race will commence at 1:35pm local time, followed by Race 2 and 3 on Saturday, as part of the Supercheap Auto Bathurst 1000.