Mitsubishi driver Elliot Barbour claimed his first ECB SuperUtes Series victory in the opening race for Round 5 at Sandown.

Barbour, contesting his second event filling in for Toby Price with Team Triton, led from start-to-finish in wet conditions.

Making the most of his ARMOR ALL Pole Position, he finished 4.5 seconds clear of Toyota driver Ben Walsh.

"Fortunately I had a good first lap and built a gap, which I was able to manage.

“That made the rest of the race a lot easier – it would have been tricky to battle with other cars in those conditions.

“The levels of grip were constantly changing, so every corner was trial and error for how hard I could push."

In the Car City Hulix, Walsh was Barbour's closest challenger. 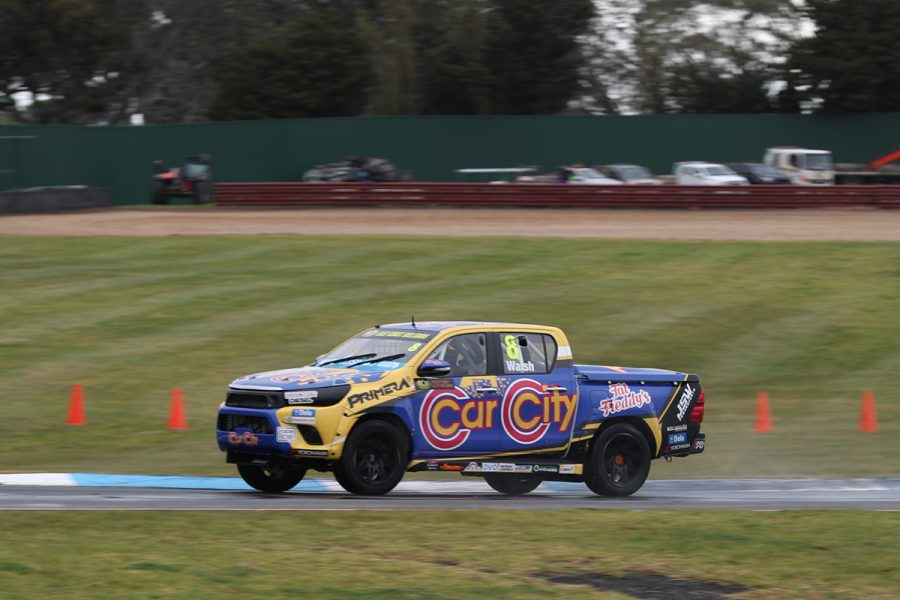 He moved from fourth to second on the opening lap, past Ryal Harris and Tom Alexander, and went on to have a lonely race.

"I had the chance to make a first-lap charge, and worked my way up into second pretty quickly," Walsh added.

“I was pushing to try and catch Elliot, but it was high-risk to push any harder and I wanted to bring home a good result."

Harris got the better of title rival Craig Woods in a fight for the final podium position.

“The engine didn’t feel like it was quite on-song, I was down on straight-line speed compared to some of the others," said Harris.

“I’m conscious of the championship, so for me the most important thing was to finish ahead of Craig.”

Woods also found his way past Alexander early, but had to settle for fourth.

“I had never turned a lap at Sandown in the wet, so I let some of the other guys go at the start and settled into my own rhythm," Woods added.

“By the end of the race I was becoming a lot more confident and I worked out the best lines for the wet – I was putting pressure on Ryal in the last couple of laps."

Aaron Cameron came from ninth on the grid to fifth in his rebuilt Bushranger Racing Mazda, with front-row starter Alexander fading to sixth.

"We’re really struggling off the slow corners in the wet," Alexander explained.

"The engine falls off boost and then when the turbo kicks in, it lights up the rear tyres. We lost some spots because of it."

Michael Sieders, in a brand-new Total Tools Triton after a Queensland Raceway rollover, finished right behind Cameron and Alexander in seventh.

Matthew MacKelden was eighth, while Tomas Gasperak passed Christopher Formosa for ninth at the final corner.

The second race of the weekend starts at 12:20pm Saturday, followed by Race 3 on Sunday, as part of the RABBLE.club Sandown 500.