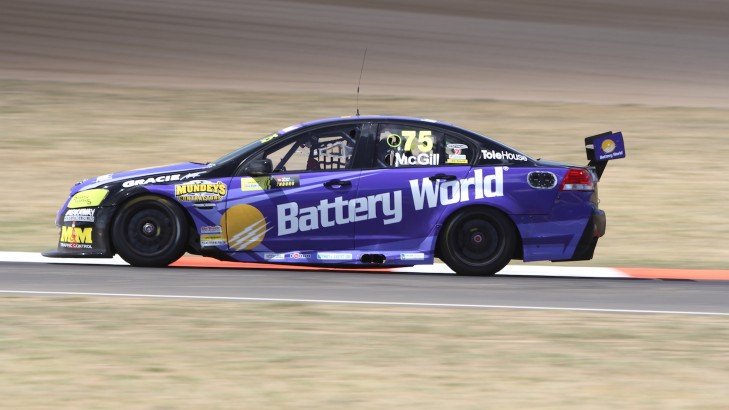 Australia's marathon man of the V8 Supercars Dunlop Series Aaron McGill is taking to the grid at the Clipsal 500 Adelaide next weekend with more than a new engine under the hood - but a secret he is ready to reveal.

With more starts in the Dunlop Series than any other driver, over 152 at last count - Battery World Australia has upped the ante in its sponsorship of the veteran driver to help him celebrate a "make it or break it" year.

Aformer regular in GT Production and two-litre Super Touring, now racingthe V8 Supercars Dunlop Series, the stalwart has competed in all but six rounds of the series since 2004 - but he is ready to put aside his marathon man moniker announcing his retirement at the end of the year at the Clipsal 500 event.

"Battery World has taken on a naming rights deal that will see us competing as Battery World Racing which allows our team our best shot to date to become more competitive both on and off of the track," McGill said.

"No one will get within a bull's roar of the number of starts I have achieved. We may not always win but there is plenty in that motto - you have got to be in it to win it.

"So to be heading into the Clipsal round again after so many seasons with the confidence of the Battery World crew who really believe in me and have put their money where their mouth is - well, it's given me renewed vigour, I feel like I am in my 20sagain. The car looks flash with new livery and we have never felt more prepared to race. Everything is on the line this year."

McGill is one of racing's real constants. Never big on budget, his small team keeps the tyres turning solely through sponsorship like Battery World and recognising their fans are a big part of attaining that.

He even drives his own transport truck covering ground from Adelaide to Perth and Townsville to Bathurst. McGill's team is a family affair, his son Matthew is his team manager and lead mechanic and has been for the last nine years.

"I can't wait for this event - you just can't beat a street circuit and the buzz you get from the crowd," he said, "Forget Bathurst - Adelaide's end of the main straight "Senna Chicane" and the daunting turn eight, on the back straight, are my favourite two stretches of racetrack in Australia. We hit turn eight at 225kms an hour."

Battery World Racing will reveal its new livery design on Tuesday evening, ahead of the season opening Clipsal 500 Adelaide.