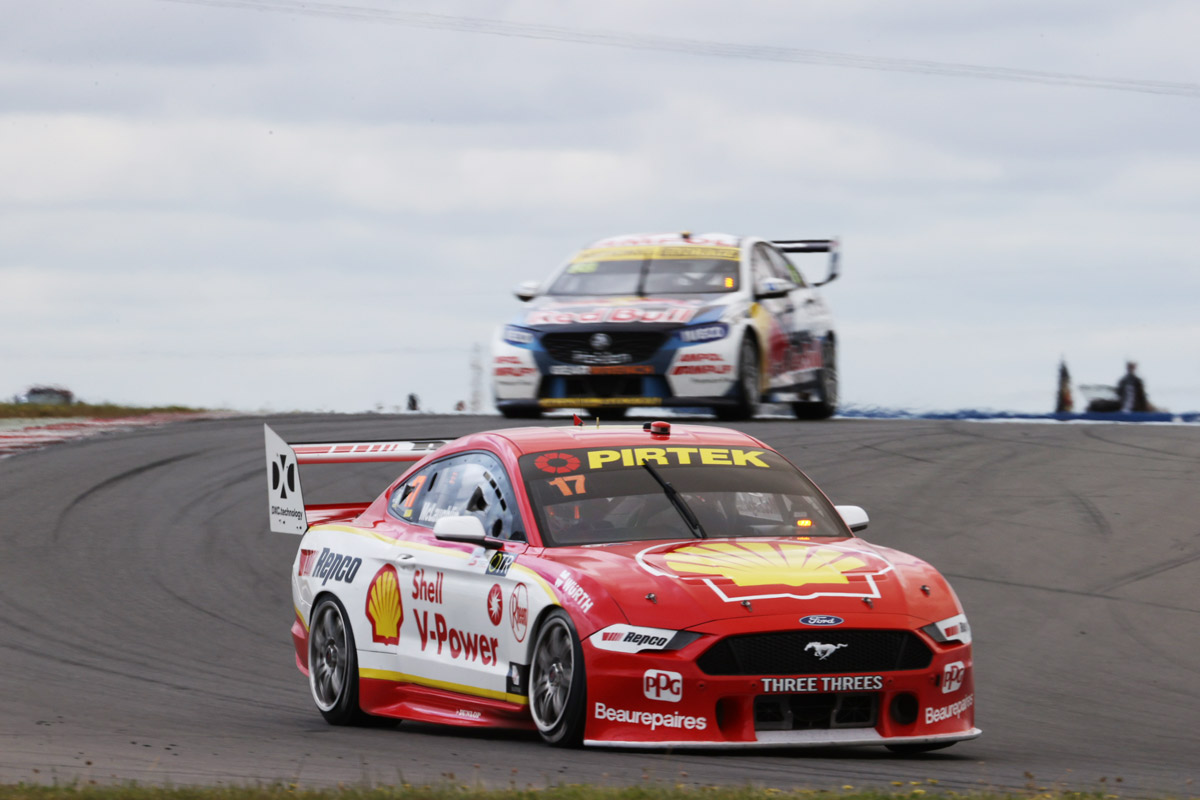 Scott McLaughlin is poised to secure his third consecutive Supercars title later this afternoon, following victory in the second race of the OTR SuperSprint.

Penrite Racing’s Anton De Pasquale and Tickford Racing’s Cameron Waters completed the podium – the second in as many days for the Ford driver.

McLaughlin now has a 299-point lead over Whincup and will seal the title in this afternoon’s third race if he ends the day with a 300-point gap.

Fabian Coulthard had beaten polesitter McLaughlin off the start, leading the way until yielding on lap seven, slotting between his teammate and Whincup.

The Shell pair retained their positions through the pitstop cycle and looked set for a one-two, before Coulthard’s car stopped with an apparent driveline failure 10 laps from home.

That triggered the Safety Car, after which McLaughlin controlled the gap back to second-placed De Pasquale to win by 1.277s.

“It’s a bummer about Fabs, I think we were on for a one-two there but huge team game by Shell V-Power Racing,” said McLaughlin.

“Fabs took it on the chin to let me go past at the start. I really appreciate that, he had a great car and had a great start.

“If we can get it done today that would be fantastic; if we don’t, we’ll put ourselves in the best position come Bathurst.”

Whincup had waited until lap 15 to make his stop, but lost crucial time when his car clipped the right-rear wheel gun hose on the way into the pitbox, ripping it out of the mechanic’s hands.

After a slow stop, Whincup rejoined a net sixth and lost a further place with four laps remaining to teammate Shane van Gisbergen.

Starting 15th, van Gisbergen was in the thick of some hectic mid-pack battles in the early laps but ran his now traditional long first stint – pitting under the Safety Car and rejoining ninth.

Van Gisbergen ended up fifth, right on the bumper of James Courtney – who drove solidly to improve one spot on his grid position.

Joining Coulthard on the DNF list was David Reynolds, whose Penrite Holden suffered a transaxle failure at the exact moment the Shell Ford failed.

Garry Jacobson and Lee Holdsworth had retired earlier after contact on a chaotic opening lap.

Also in the wars was Jack Le Brocq, who was 13th after an early spin following a hit from Bryce Fullwood, who ended up 18th after a 15-second penalty.

Scott Pye finished 19th, having run ahead of van Gisbergen before a slow pitstop and a late flat-tyre cruelled his charge.

McLaughlin will start this afternoon’s race from ARMOR ALL Pole with Whincup third.

Asked of his plan for the final race, McLaughlin said: “Beat him. That’s it.”