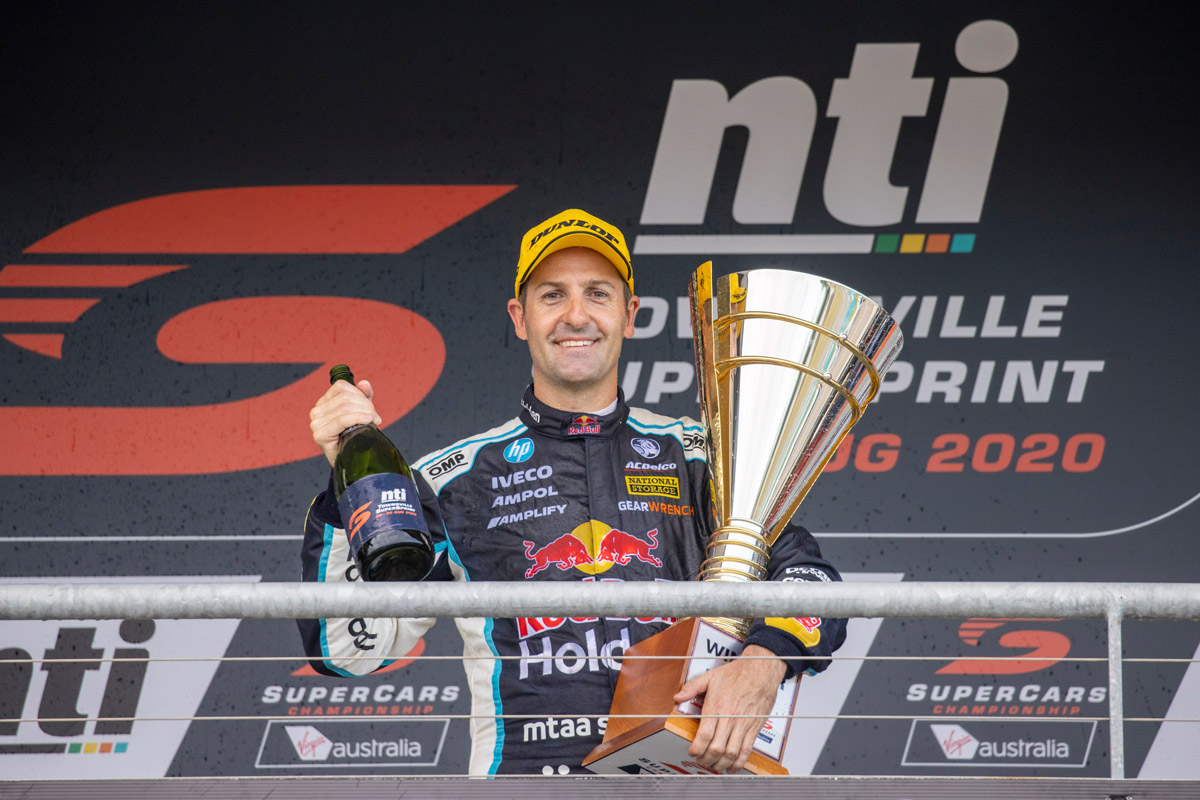 Jamie Whincup has eaten into Scott McLaughlin’s championship lead with an emphatic victory in the opening race of the NTI Townsville SuperSprint.

Making the most of ARMOR ALL Pole Position, Whincup controlled the race from the start, only losing the lead during the pitstop cycle.

When the stops shook out Whincup had a slender lead over Mostert before easing away to his 11th victory from 24 starts at the North Queensland venue.

Cameron Waters was the man to watch in the closing stages, having dropped from third to fifth by running his first stint until lap 23 before charging home on four fresh tyres.

The Tickford driver made short work of Scott Pye and David Reynolds before closing down a nine-second gap to Mostert, taking second four laps from home.

A radio malfunction proved the only real issue for Whincup, resulting in the seven-time champion initially being confused if the race had finished.

“We lost radio about lap 10 so I was screaming at the guys to put the board out and then I didn’t get the chequered flag,” said Whincup, who took the win by 6.9 seconds.

“[The flag waver] sort of had it out but he didn’t know if it was me or not, and I just remember the old man always said just keep going until you get the chequered flag so I thought I’d keep going.”

Whincup then ended up parking on the front straight following the cool-down lap, instead of heading back to pitlane.

“We changed the podium presentation in Darwin to the track for COVID reasons but I think we have changed it back to pitlane,” he shrugged. “I was just trying to wing it with no radio!

“All in all though, happy with the win, the car was excellent. We used three tyres, I think most maybe only used two but we needed the win.”

Like Waters, Fabian Coulthard also made ground in the closing stages to finish fourth ahead of Reynolds, James Courtney and McLaughlin.

Starting 16th after a mistake in qualifying, McLaughlin was eighth by Turn 3 thanks to some carnage ahead before going aggressive on strategy, pitting on lap eight.

The Shell team’s plan to blaze in clean air was dashed though by Lee Holdsworth and Pye, who both pitted a lap later and emerged ahead of the #17 Mustang.

McLaughlin spent almost 20 laps behind Holdsworth before finally making his way by, but could do little to stop Coulthard and Courtney from demoting him on fresher rubber.

Pye and Holdsworth were in the same boat and fell to ninth and 13th respectively.

The carnage was a classic concertina at the Turn 2 hairpin, where van Gisbergen was forced into the back of Anton De Pasquale, turning the Penrite Racing Holden around.

Damage forced van Gisbsergen to the garage, where he was joined by Macauley Jones, Todd Hazelwood and Andre Heimgartner, who’d also been caught up in the incident.

Nick Percat was another who failed to finish, headed for a top six placing before suffering an engine failure on lap 24.

McLaughlin’s lead over Whincup in the standings has been cut from 177 to 141 points, with Mostert moving to third ahead of van Gisbergen, who is 377 adrift of the top spot.