The #1 Red Bull Holden Racing Team Commodore led from start to finish, and was never seriously troubled, on the weekend that marks 15 years since Triple Eight entered Supercars.

It is the third victory for Whincup and Dumbrell together in the Melbourne race, following triumphs in 2013 and '14.

“I couldn’t be happier. The car has been awesome all weekend, PD did a fantastic job, but it’s not over until it’s over,” Whincup said.

"We just kept our head down, kept concentrating, this race has gotten away from us a few times, but thankfully it was a nice and clean race."

Craig Lowndes and Steven Richards finished third to complete the podium rout, while Scott McLaughlin and Alex Premat had to fight to hold onto fourth from Erebus' David Reynolds and Luke Youlden.

With the results, van Gisbergen's championship lead over Shell V-Power Racing driver McLaughlin grows to 55 with four events remaining, while Whincup in third is 338 behind. 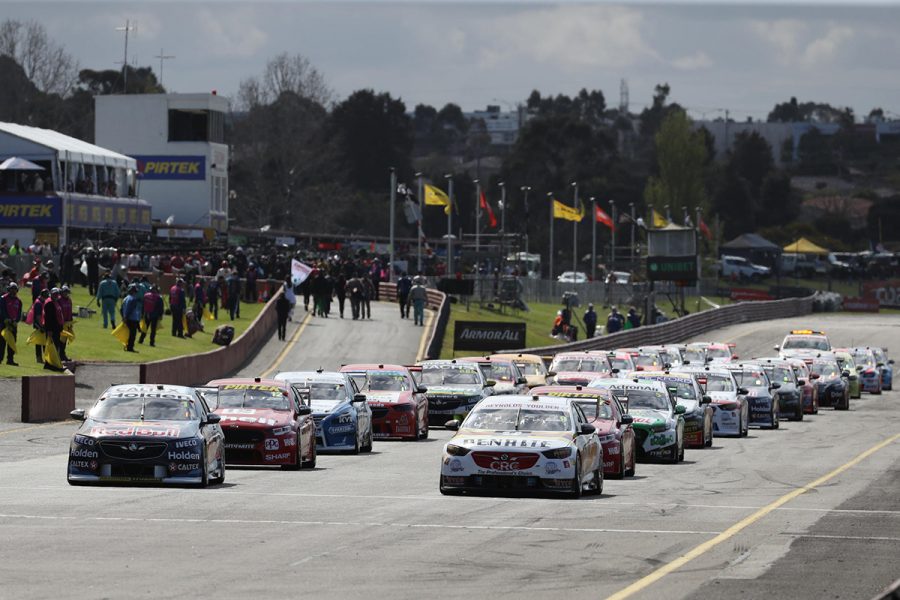 Dumbrell got the best of the starts from the front row and cleared out, leading Premat by 12.6s after 15 laps.

The first round of stops coincided with a brief Safety Car period on lap 23, for Dean Fiore's stricken Nissan, with Dumbrell pitting under yellows.

That wiped an 18s advantage and he led Richards - one of the first to stop - when racing resumed, with the Shell Fords of Premat and Tony D'Alberto third and fourth.

Dumbrell opened a gap at the front again, sitting 19s clear by the time co-drivers completed their mandatory laps and pitted en masse from lap 54.

The Safety Car was again called during this period, when Jason Bright got beached at Turn 9, with Dumbrell handing over to Whincup.

Van Gisbergen's Holden picked up a pair of places during these stops - jumping the McLaughlin and De Pasquale entries - from sixth.

Co-driver Bamber spent most of his stint in the bottom half of the top 10, having started 11th, but made inroads as it progressed.

While Dumbrell strode away from the field twice, Lowndes went with Whincup after the restart and was within four seconds at the halfway mark of the race.

Van Gisbergen passed Coulthard for third on lap 81 to make it a Triple Eight one-two-three, before the third round of stops between laps 88 and 93 for the leaders, including brake-pad changes.

Whincup emerged with a 2.1s buffer over Lowndes, while van Gisbergen had to clear the undercutting Nissan of Rick Kelly.

As the stint wore on, Lowndes faded to be closer to van Gisbergen, whose deficit to Whincup hovered around the 10s barrier, while McLaughlin was by now 25s adrift.

Lowndes let van Gisbergen past for third on lap 123, as the fourth and final stops loomed.

When they had shaken out, Whincup sat 10s clear of van Gisbergen and 14s clear of Lowndes as the laps ticked down.

Whincup backed off in the closing stages but still lapped up to 12th place to record his fifth victory of the season. 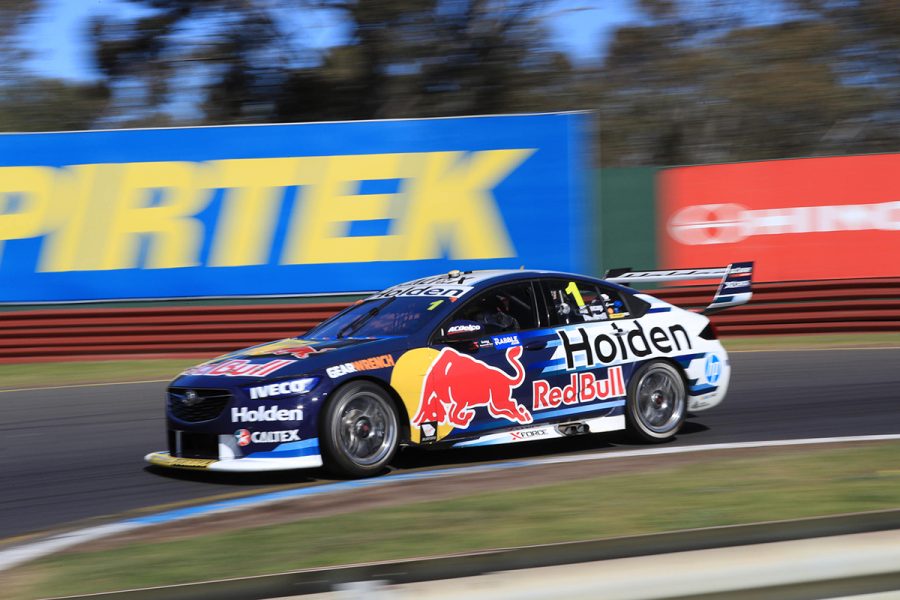 “There was no doubt we had one-lap pace, but we proved today we had good durability as well,” Dumbrell said.

Van Gisbergen extended his championship lead over McLaughlin, while Bamber claimed silverware on his Supercars debut.

“What a privilege to drive these cars, the Red Bull Holden Racing Team have given us some rockets, it was awesome," van Gisbergen said.

“Earl did a great job, from 11th up to the front and then some good strategy. It’s an amazing day.”

Third for Lowndes and Richards follows a relatively quiet 2017 Enduro Cup for the veteran pair.

“Richo set it up. He did a fantastic two stints, the car lost a bit of pace in the middle but we tuned it up in the last stop and had great pace,” Lowndes said.

“We wanted to make sure we got this one-two-three.”

Co-drivers Premat and Youlden had a brush on the run to Turn 1 on lap 1 with Dean Canto, on the outside, middle and inside respectively.

All three were able to continue, Premat in second followed by Canto and Youlden sporting minor left-front guard damage.

The Coulthard/D'Alberto Falcon ran ahead of McLaughlin/Premat through the middle stint of the race, but McLaughlin got back ahead before the third stops. 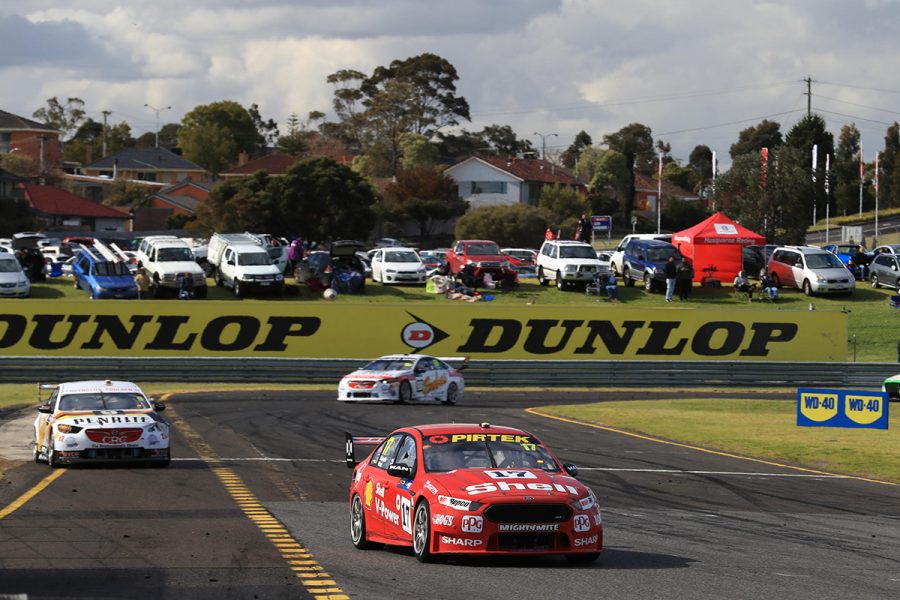 He could not make any inroads against the Triple Eight Commodores, though, and instead spent the rest of the race effectively fighting Erebus' Reynolds, McLaughlin eventually holding on by six tenths.

Coulthard/D'Alberto came home in seventh, ahead of the first Nissan of Kelly and Garry Jacobson.

Garth Tander and Chris Pither put in a fine recovery to ninth, after Pither was spun at Turn 3 on the opening lap and fell to the back of the field.

Beyond Canto running third in the early stages in Mark Winterbottom's Bottle-O Falcon, Tickford had a muted defence of the race it won 12 months ago.

The second Erebus Commodore of De Pasquale and Will Brown ran inside the top five through the opening stint, as Brown mixed it with more-experienced co-drivers.

While they faded to 12th, passed late by Will and Alex Davison, they were still the first combination home with a rookie full-time driver.

ARMOR ALL Race for the Grid 1 winner Aaren Russell was spun out of sixth at Turn 1 on lap six after a touch from Will Brown on the inside, falling to 20th, the with the Nissan finishing 14th.

James Courtney was the only primary driver to start, from last after crashing his Commodore in ARMOR ALL Race for the Grid 2 on Saturday.

He cut his way up to 15th in the first dozen laps but locked up into Turn 2 trying to pass Dean Fiore on lap 23, resulting in contact that broke the Nissan's steering and causing the first Safety Car.

The car ran inside the top 10 with co-driver Jack Perkins behind the wheel, preforming strongly against the primary drivers, but ultimately finished 16th.

Fiore and Michael Caruso were running at the end but 28 laps down, with team-mates Simona De Silvestro/Alex Rullo the only non-finishers after losing power.