Supercars championship leader Jamie Whincup finished Friday practice at the WD-40 Phillip Island 500 on top, with a dominant performance in the second session.

Whincup led for the entirety with a time set on his first flying lap in his Red Bull Holden Racing Team Commodore, and was ultimately two tenths clear of Scott McLaughlin.

The start of the session was delayed by 30 minutes for barrier repairs at Lukey Heights, required after a heavy crash in the preceding Porsche Carrera Cup practice session.

Whincup was fast straight away when the session got going, turning the weekend’s maiden sub-1:30s lap, his 1:29.9856s an effort that was never bettered.

That put him 1.3 seconds clear of the field, as drivers’ attempts to settle into programs were hit by a red flag 10 minutes in, to retrieve debris from Todd Hazelwood’s Falcon.

It took until the second half for any driver to get within a second of Whincup, with Erebus Motorsport’s David Reynolds 0.9695s adrift, just ahead of team-mate Anton De Pasquale.

Scott McLaughlin on a new-tyre run slotted into second with 10 minutes to go, but was still 0.6628s off Whincup’s early benchmark and lamenting understeer.

McLaughlin got within 0.2196s with two minutes left on the clock, when Whincup went back out but could not improve on his earlier flier.

“We put good tyres on at the start and then at the end,” said Whincup.

“We detuned the car unfortunately due the session, so we didn’t go as quick at the end.

“We’re there or thereabouts, the way we have the last few rounds, but those Penske cars are quick so we’re going to have to work hard to get pole.”

With Fabian Coulthard slotting into third late, the Shell V-Power Racing Fords were second and third, while Tickford Racing’s Mark Winterbottom made it three Falcons in the top four.

Chaz Mostert, Shane van Gisbergen - who survived a wild ride into pitlane mid-session - Will Davison and Scott Pye rounded out the top 10. 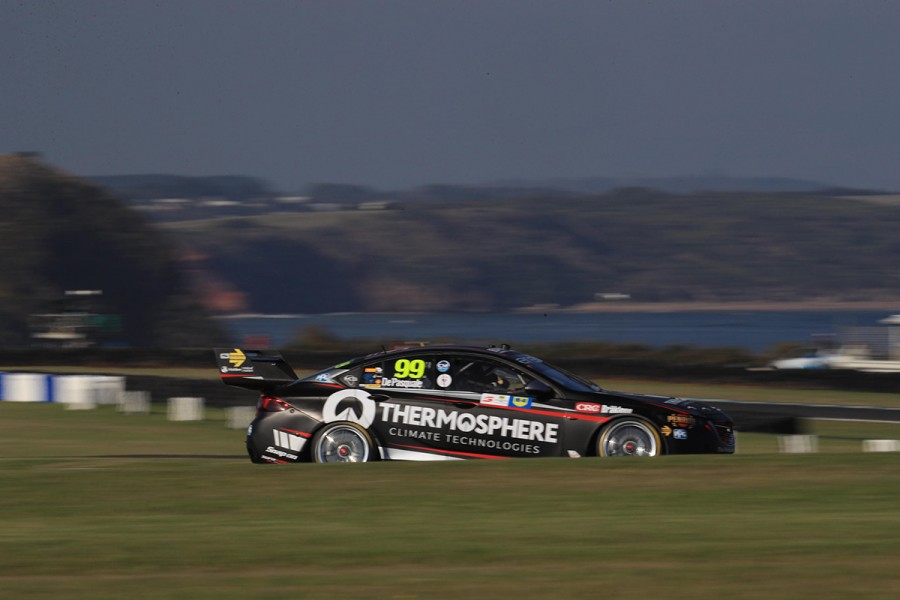 The Erebus Commodores of Reynolds and top rookie De Pasquale were 11th and 12th, with Todd Hazelwood the next-best newcomer in 15th and last-start winner Craig Lowndes 19th.

“We’ve been struggling with breaking front bars every time we go out there,” he said.

“The front splitter is crashing out at Turn 1 and [giving it] a massive vibration, just undriveable.

“I think we went through about three splitters in that session and the final one felt alright.

“We’ve had no time to tune the car, so it’s been a terrible day. I hope we come back better tomorrow.”

ARMOR ALL Qualifying for Saturday’s 250km race starts at 12:05pm.