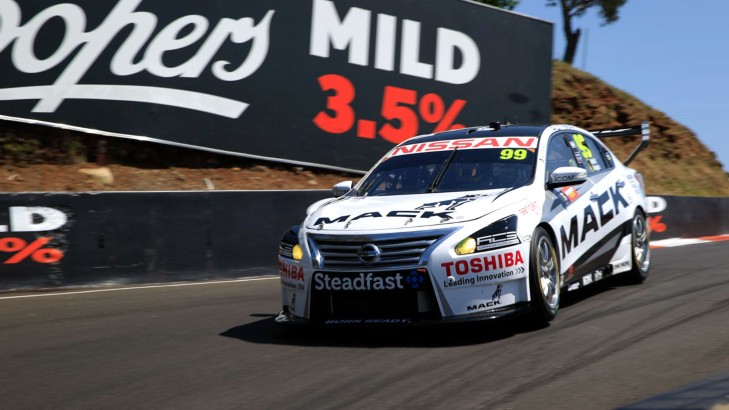 The replacement for James Moffat at Nissan Motorsport will have the potential to become a "great" driver, not necessarily the one with the biggest wallet.

That's the message from team co-owner and star driver Rick Kelly, who is heavily involved in the selection process triggered by Moffat's post-Bathurst decision to move to the factory Volvo operation run by Garry Rogers Motorsport.

"The biggest prerequisite is someone that we think we can work with that will fit in our team really well and has the potential to be great," Kelly told v8supercars.com.au.

"There are four guys we are in decent discussions with and I am not going to tell you who they are," he added.

While unwilling to name the drivers in the frame, Kelly did confirm the team hoped to make a decision within four weeks, although that was not a strict deadline.

"It's hard to put a timeline on it because it happens as it happens," Kelly explained. "When you are talking about different drivers and different opportunities, there are a number of things at play that can dictate when they will get agreed upon or not agreed upon."

Moffat made the leap to Volvo because Nissan Motorsport didn't have a commercial package in place to support his Altima for 2016. It is still searching for funding for its fourth car, leading to an expectation a pay driver would take on the seat.

But Kelly debunked that, emphasising that there was a wide spread of on and off-track performance parameters the successful driver would have to tick off.

"We will need to put a commercial package together around someone (in the fourth Altima), so whether that's them having an existing relationships or we find someone who is keen on a particular person that's yet to be determined.

"But regardless, each car we have in our stable must have commercial backing.

"For us 10 per cent of our job as V8 Supercars drivers these days is driving V8 Supercars," Kelly added. "It's what everything else hinges on, so that has to be a strength for sure, but there are some drivers we won't have in our team because they are not capable of dealing with a team environment; giving good feedback to their engineer, dealing with sponsors appropriately and so on.

Kelly said the driver the team planned to select for the seat would be one that showed potential but wasn't yet ranked as a star of the category, which he pointed out was how Moffat was regarded when he joined the team from Dick Johnson Racing for the 2013 season.

He also pointed out Moffat came with backing from Norton Antivirus.

"We hired him because we knew he had capabilities although we also knew he had a few things to tidy up on and when we put James on there was a lot of people going 'he's this, he's that', whether that was good or bad.

"Now three years later there is no question that he is good - he is good."

Kelly explained that in himself, brother Todd and Michael Caruso, the team had three established drivers with known performance levels. The team's fourth car could therefore be used to develop new talent.

"The fourth seat you look at someone who is on the way up, someone who could potentially be the next big thing," said Kelly.

He admitted that making that selection presented significant challenges.

Current Brad Jones Racing driver Dale Wood - who drove for Kelly Racing in 2009 and went on to win the 2013 Dunlop development series - and his backer GB Galvanising have been linked with the Nissan drive, as have Kiwis Chris Pither and Ant Pedersen, who both have commercial packages supporting them. Development series superstar Cam Waters is another driver with commercial support, but he is understood to be locked in at Prodrive Racing Australia.

Meanwhile, out-of-contract Prodrive star David Reynolds is not thought to be on Nissan's list.

While refusing to confirm any interest in Wood, Kelly did make the point he was the sort of driver with potential who could suit the seat.

"We have had Dale in the team before and we know he is a fast driver and in the position he is in he needs a fair shot and he needs to be with the right people," Kelly said.

28/10/2015
Stay In The Know
Sign up to the Virgin Australia Supercars Championship Newsletter
We use cookies to ensure that we give you the best experience on our website. If you continue to use this site we will assume that you are happy with it.Ok