Shane van Gisbergen has provisionally closed on Scott McLaughlin in the Supercars Championship, after beating his title rival to victory in the ITM Auckland SuperSprint opener.

The Red Bull Holden Racing Team driver crossed the line first at Pukekohe after passing McLaughlin on-track twice, and despite being handed a late five-second penalty.

Van Gisbergen is, though, still the subject of a post-race investigation for spinning rear wheels at his second pitstop.

He finished 5.5119 seconds clear of McLaughlin, which became a 0.5199s advantage after a time penalty for contact between the pair at the hairpin on lap 60 of the 70 was applied.

Pending any sanctions for van Gisbergen, he would move to two points behind McLaughlin in the championship fight with three races remaining.

"That was one of the coolest races I’ve ever had," van Gisbergen said.

"We were having a great battle with James Courtney, and the pass with Scotty, he jammed it up quite nice and I just touched the back of him.

"But great respect through the last couple of corners side-by-side and cleared him up over the hill.

Chaz Mostert rounded out the podium for Tickford Racing, while McLaughlin's team-mate Fabian Coulthard crashed out of contention early.

Polesitter McLaughlin held the lead off the line and led van Gisbergen by less than a second through the first seven laps, as light rain fell.

Only a handful of cars opted not to pit during an early Safety Car period, called when Coulthard found the wall heavily at the final corner on lap eight, after a tangle with Lee Holdsworth and Richie Stanaway.

They all emerged behind James Courtney, who had stopped at the end of the opening lap with Mark Winterbottom, the pair having started 15th and 14th.

It was status quo until van Gisbergen pounced to pass the Shell Ford at the hairpin on lap 22, and had a look at passing Courtney at the same place four laps later.

A repeat effort on lap 31 got van Gisbergen ahead briefly, only for Courtney to brave it around the outside of Turn 9, as McLaughlin escaped the pack by pitting. 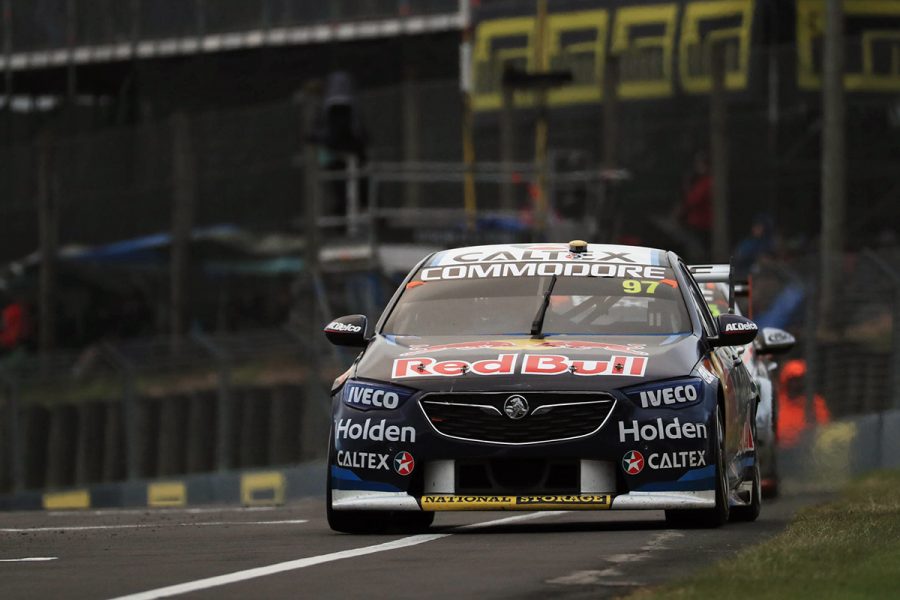 As McLaughlin gained ground in clean air, van Gisbergen finally moved past Courtney at the hairpin on lap 34 and committed to running long, for a shorter stint home.

Van Gisbergen, though, was bottled up again before too long, by Reynolds, who was fourth but nearly a lap down based on having already pitted.

The Red Bull Holden driver ultimately came in on lap 45, emerging four seconds behind McLaughlin but just doing enough to keep Mostert at bay through Turns 1 and 2.

As van Gisbergen started to cut into McLaughlin's lead, which was down to 3.1s with 20 laps remaining, stewards announced they were investigating spinning wheels during his pitstop.

McLaughlin's advantage was down to 1.7s with 15 laps to go and van Gisbergen continued his march to be right behind by lap 60 of the 70.

Van Gisbergen didn't spend long on McLaughlin's bumper, making contact attempting a crossover at the hairpin that lap, after McLaughlin protected the inside line.

They then ran side-by-side through Turns 9 and 10, van Gisbergen on the outside initially before McLaughlin was forced to concede and drop in behind.

Van Gisbergen pulled away to be 2.6s clear with five laps remaining, when stewards handed him a five-second time penalty for the contact with McLaughlin.

McLaughlin could not go with van Gisbergen's fresh burst of pace, the gap getting out to the crucial 5s as the final lap started.

Despite running wide through the final corner, van Gisbergen crossed the line with a 5.5119s advantage that leaves him as the race winner.

That is, though, pending the outcome of a stewards investigation. 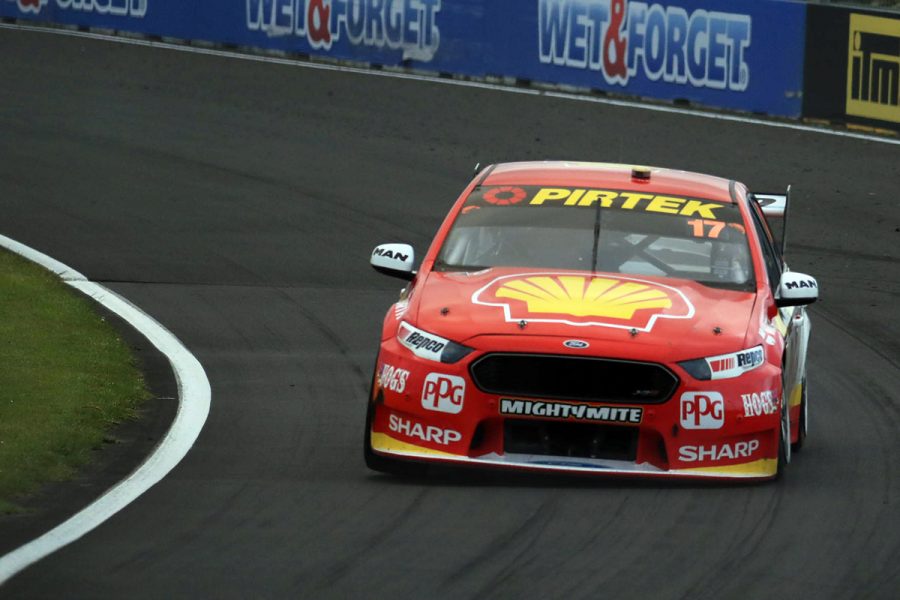 "We raced really hard all race, obviously there was a bit of tit-for-tat there,” McLaughlin said.

"It was great racing around the back side-by-side, plenty of respect and we go hard.

"Gutted we didn’t get the win at the end of the day, but we gave it a shot on strategy.

"Hopefully Ford fans we can come back tomorrow and give these Opels a run."

After winning the Saturday Gold Coast race, it made it back-to-back podiums for Mostert for the first time since the Queensland Raceway event in 2017.

Reynolds faded through the second half of proceedings but still took fourth, ahead of Jamie Whincup.

Whincup had to double-stack behind van Gisbergen during the early stops and dropped from fifth to 17th, but got back up to ninth before the second stops started. 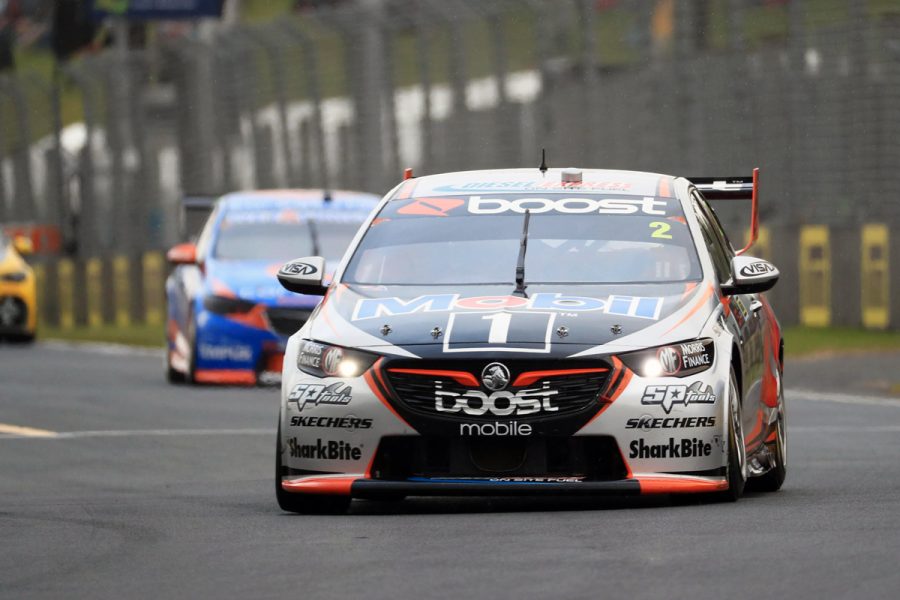 Scott Pye made his way from 16th on the grid to sixth in what was ultimately the lead Mobil 1 Boost Mobile Racing Commodore, Courtney eventually finishing ninth.

Between them, Cameron Waters finished seventh and Nick Percat eighth, while Michael Caruso was the lead Nissan in 10th.

Craig Lowndes fell to last on the first lap, spat out of the pack at the back chicane, then made a pair of Safety Car pitstops to top up on fuel.

The Bathurst winner picked his way back from there to 11th, ahead of Tim Blanchard, Winterbottom and top rookie James Golding.

For his part in the Coulthard incident, contact with the rear of Holdsworth's Commodore, Stanaway was handed a drive-through penalty, with a further investigation to follow post race.

Holdsworth and Stanaway ultimately finished 15th and 23rd, while for Coulthard it was a second heavy accident on a Saturday at Pukekohe in as many years.

"Saturdays at Pukekohe aren’t my thing. We had that drama here last year, same series of corners," he said.

"Hopefully the boys don’t have too much work and we can get it back out there.

"We have the best crew in the pitlane so hopefully we’ll be out there tomorrow."

Garth Tander lost seven laps early, after clashes on each of the first two laps, both of which will be investigated post-race.

The first rotated Lowndes at the back chicane on lap one, and the second sent Simona De Silvestro's Nissan into the second GRM Commodore of James Golding at the hairpin.