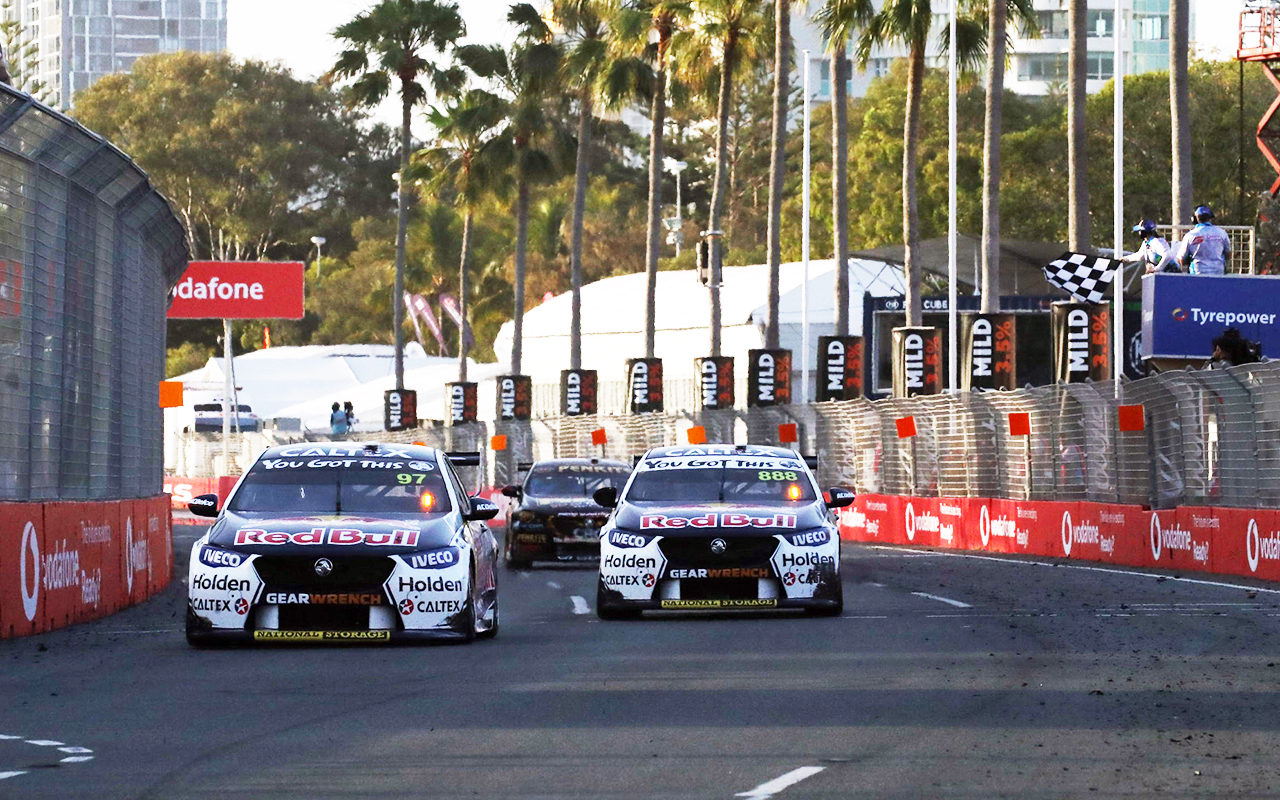 The Red Bull Holden Racing Team has completed a weekend of dominance on the streets of Surfers Paradise, with Shane van Gisbergen leading a 1-2 on Sunday.

After trailing Jamie Whincup home in the opening leg of the Vodafone Gold Coast 600 on Saturday, the intra-team tables turned for the finale.

Having locked out the front-row, it was Whincup’s co-driver Craig Lowndes who got the better jump off the start line but the veteran played it safe in combat with teammate Garth Tander.

That allowed Tander to crucially put the #97 in first and it would remain there for much of the race.

Van Gisbergen’s biggest threat came through the second round of pitstops as Whincup ran deeper in similar fashion to the #97’s Saturday strategy.

Whincup emerged just 0.5 seconds behind in a tight re-entry from pit exit and on fresher tyres, before returned the favour from a day earlier and didn’t threaten for the win.

Whincup closed to within 0.1746 seconds by the finish, with Penrite Racing’s David Reynolds/Luke Youlden a fine third just a further 0.6720 seconds back.

“We had the short tyre strategy and had to run them long at the end,” said van Gisbergen.

“I was struggling a little bit but trying to manage, then Dave put the pressure on and we had to speed up again.

“What an awesome weekend. Two one-twos for the Red Bull Holden Racing Team, it’s really special to be a part of it.

“Yesterday paid back today, it’s all about the team.”

A weekend of maximum points moves Red Bull to within 132 points of Shell V-Power Racing for the lead of the teams’ championship after a horror day for the Ford powerhouse.

Championship leader Scott McLaughlin did not start the race after a terrifying qualifying crash this morning.

Fabian Coulthard/Tony D’Alberto meanwhile had a rough time of it, suffering from a lambda sensor failure that caused a long first pitstop, after which it was issued a 15-second time penalty for wheel-spinning.

Behind Reynolds was Scott Pye/Warren Luff and Cameron Waters/Michael Caruso, who led the middle part of the race on an alternate strategy.

Pye passed Waters for fourth on lap 83 to cap a strong weekend for the #2 Walkinshaw Andretti United entry.

Twenty-three cars took the start, with both McLaughlin and Chaz Mostert’s Mustangs out of action, and the race began with Turn 11 chaos on the opening lap.

Todd Hazelwood - one of four primary drivers starting the race - divebombing Will Brown was the catalyst for carnage.

Brown was spun across the track, with Richard Muscat, Dean Canto, Steven Richards, Bryce Fullwood and Ash Walsh all caught up.

The damage to Muscat’s Commodore was too much to return to the track.

The Nissan of Simona De Silvestro and Alex Rullo also spent significant time in the garage after the latter made contact with Mark Winterbottom; the #78 Altima made the finish but some 20 laps down.

The series resumes in a fortnight at the Penrite Oil Sandown 500, with McLaughlin and van Gisbergen the only title contenders heading into the penultimate round.

McLaughlin now leads his countryman by 463 points with a maximum of 600 remaining.

Van Gisbergen/Tander meanwhile lead Whincup/Lowndes by 36 points two-thirds of the way through the PIRTEK Enduro Cup.