Shane van Gisbergen has brought up his 50th career win with victory in Race 16 at the NTI Townsville 500.

It was a near-carbon copy showing of Saturday, with van Gisbergen hunting and passing teammate Jamie Whincup for the win.

It marked van Gisbergen’s 10th victory from 16 starts in 2021, and seventh at the Reid Park Street Circuit.

Like Saturday’s first 250km marathon, Sunday’s race ran green for the duration, with Anton De Pasquale again third, albeit over 25 seconds from the lead.

As he did on Saturday, ARMOR ALL Pole winner Whincup won the start and was the clear leader through the Turn 1 kink.

Van Gisbergen enjoyed no such fortune, with Percat and Hazelwood immediately demoting him to fourth.

An aggressive dive under brakes into Turn 2 around the outside helped van Gisbergen clear Hazelwood, but Percat held the ideal line into Turn 3.

With no intentions to see Whincup drive away, van Gisbergen cleanly passed Percat under brakes into Turn 11.

Whincup raced away into a clear lead, but the racing wasn’t as clean down the pack; Jack Le Brocq turned Macauley Jones in front of the pack at Turn 11.

Scott Pye and James Courtney, the former hit by Fabian Coulthard in the concertina, had nowhere to go.

For the second time in as many days, Pye was forced into the garage for repairs, with Coulthard consigned to retirement.

The big winner was Pye’s Team 18 stablemate Mark Winterbottom, who gained five spots in the drama and sat 16th after the opening lap. 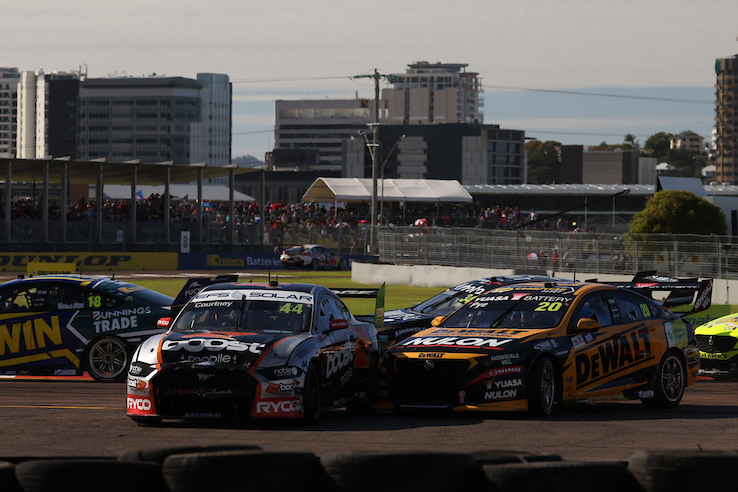 Van Gisbergen shadowed Whincup through the opening laps, with the margin hovering around a second.

Percat had little to challenge the lead duo, with the #8 R&J Batteries entry four seconds down after 13 laps.

As drivers settled into a rhythm, some began to slip up; notably, Will Brown bowled a wide at Turn 3, allowing Will Davison through into sixth.

Brown reclaimed the position with a forceful move at Turn 11, with Tim Slade following the Erebus Motorsport rookie through.

De Pasquale, who was also a beneficiary of Brown’s error, chasing Cameron Waters for fifth, and claimed the place at Turn 2 on lap 22.

Davison opted for an undercut and stopped on lap 23, and took on 15 seconds of fuel.

The leaders continued to run their own race; by lap 25, Percat was 10.9s from the lead.

The third-placed man stopped, and had been nursing a power steering issue. However, Percat’s dive into the lane came at a surprise to his crew.

A punishing hold of 41 seconds followed, dropping Percat out of contention.

Whincup and van Gisbergen began to hit backmarkers, with the pit cycle well underway. Red Bull Ampol Racing gave Whincup no option but to pit on lap 28, bringing him out of the traffic.

The #88 entry took on 77 litres and Whincup returned to the race, with van Gisbergen running long and clear into a 15-second lead over Hazelwood.

Hazelwood and De Pasquale came in from second and third on the road, and the latter’s shorter stop helped the #11 Shell V-Power Racing Mustang in front.

Van Gisbergen was brought in on the following lap, and took on 91 litres.

The series leader rejoined the race 10 seconds down on Whincup, whose undercut paid dividends.

However, like it was on Saturday, van Gisbergen enjoyed a fuel advantage for his second stop, and began to eke away at Whincup’s lead. 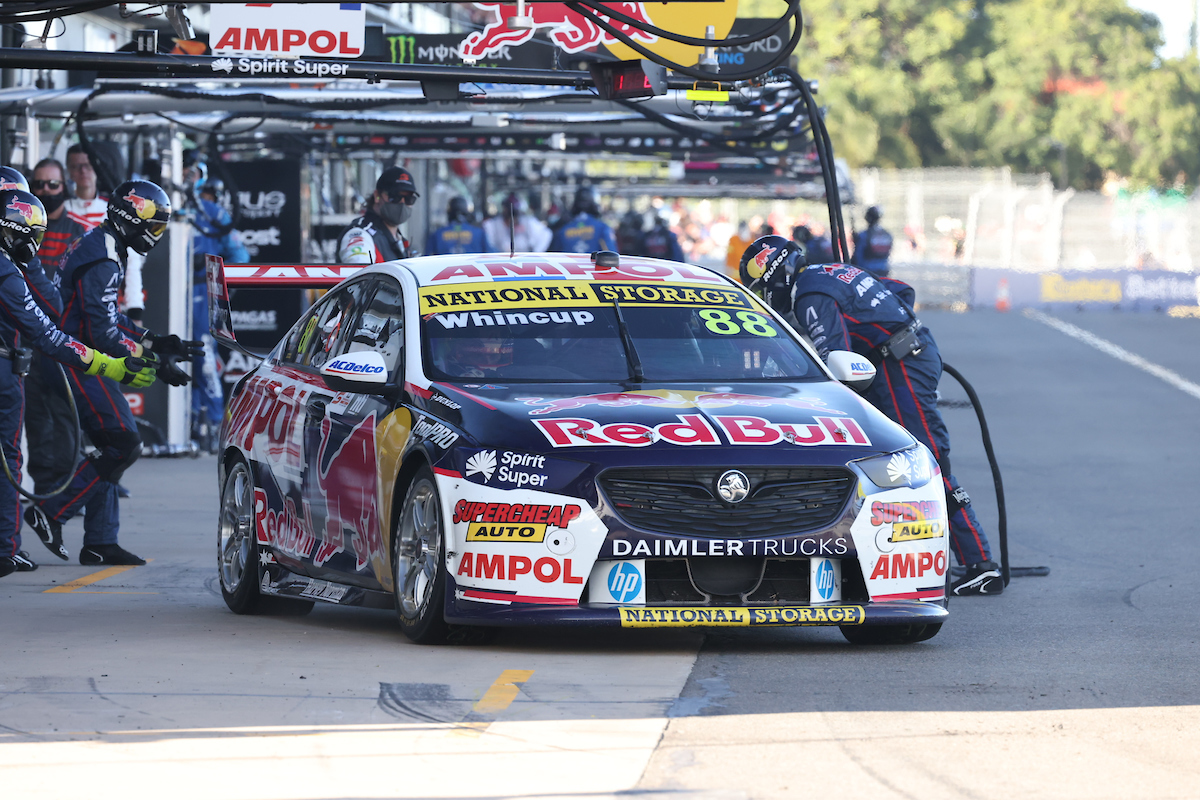 Davison was four seconds down in effective third ahead of De Pasquale, who in turn was seven seconds behind his teammate.

Waters was fifth with Hazelwood just behind, with Brown chipping away at the margin to the #14 Pizza Hut entry.

De Pasquale reined in and overtook Davison for third; through 53 laps, he was 14 seconds behind van Gisbergen, who in turn had slashed Whincup’s lead to four seconds.

Davison was again first of the lead runners to pit, and emerged near the race leader.

Hazelwood and Waters followed on consecutive laps, as did Brown and Slade. Hazelwood jumped Waters in the lane, but the Tickford driver aggressively retook the position some laps later at Turn 2.

Whincup’s lead over van Gisbergen was only 1.2s with 30 laps remaining, with the championship leader, like he did on Saturday, honing on the back of his teammate. 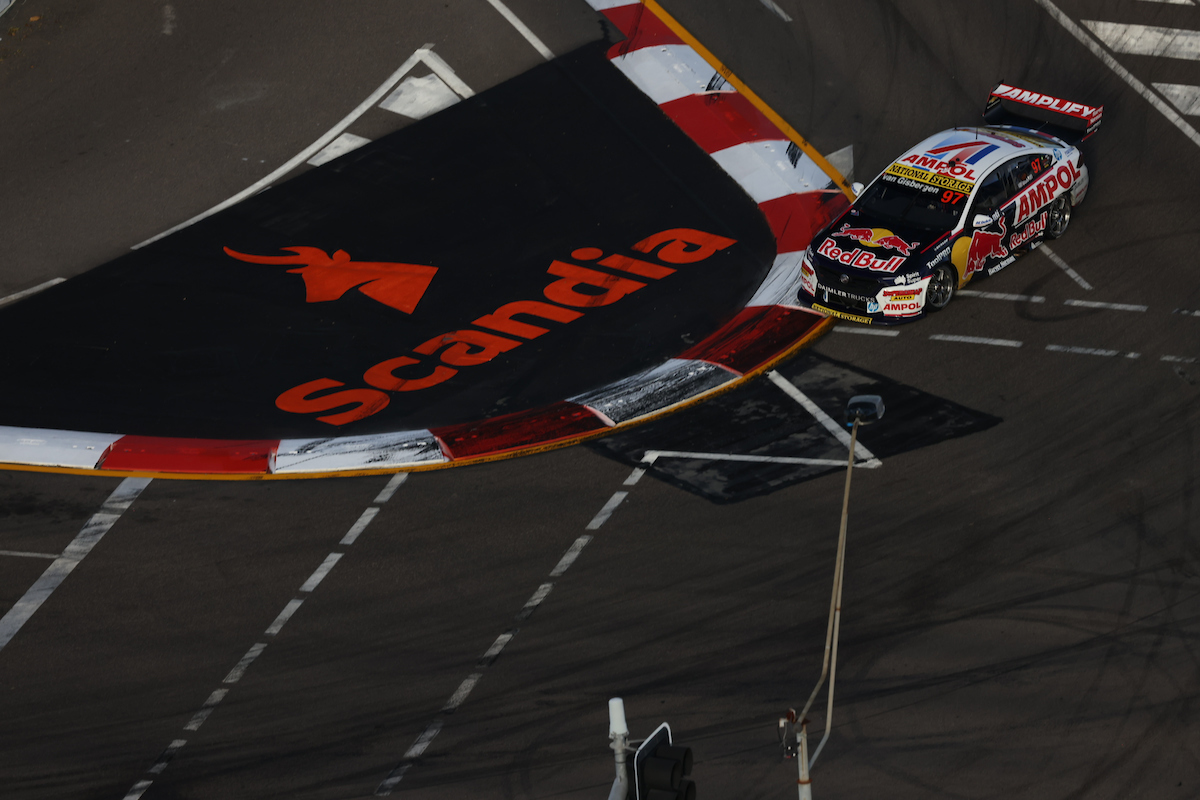 Racing through traffic had eaten away Whincup’s fuel margin over van Gisbergen, who had a pace advantage.

Whincup again opted for the undercut and stopped on lap 60, releasing van Gisbergen into the lead.

De Pasquale’s lap 62 stop left van Gisbergen as the only frontrunner yet to stop. Whincup’s undercut attempt was aided as van Gisbergen continued to hit traffic.

On lap 65, van Gisbergen stopped. As he exited the lane, Whincup blazed by and retained the lead, setting up a 23-lap sprint to the end between the teammates.

The margin was four seconds with 20 laps remaining, with De Pasquale third, 13 seconds behind. 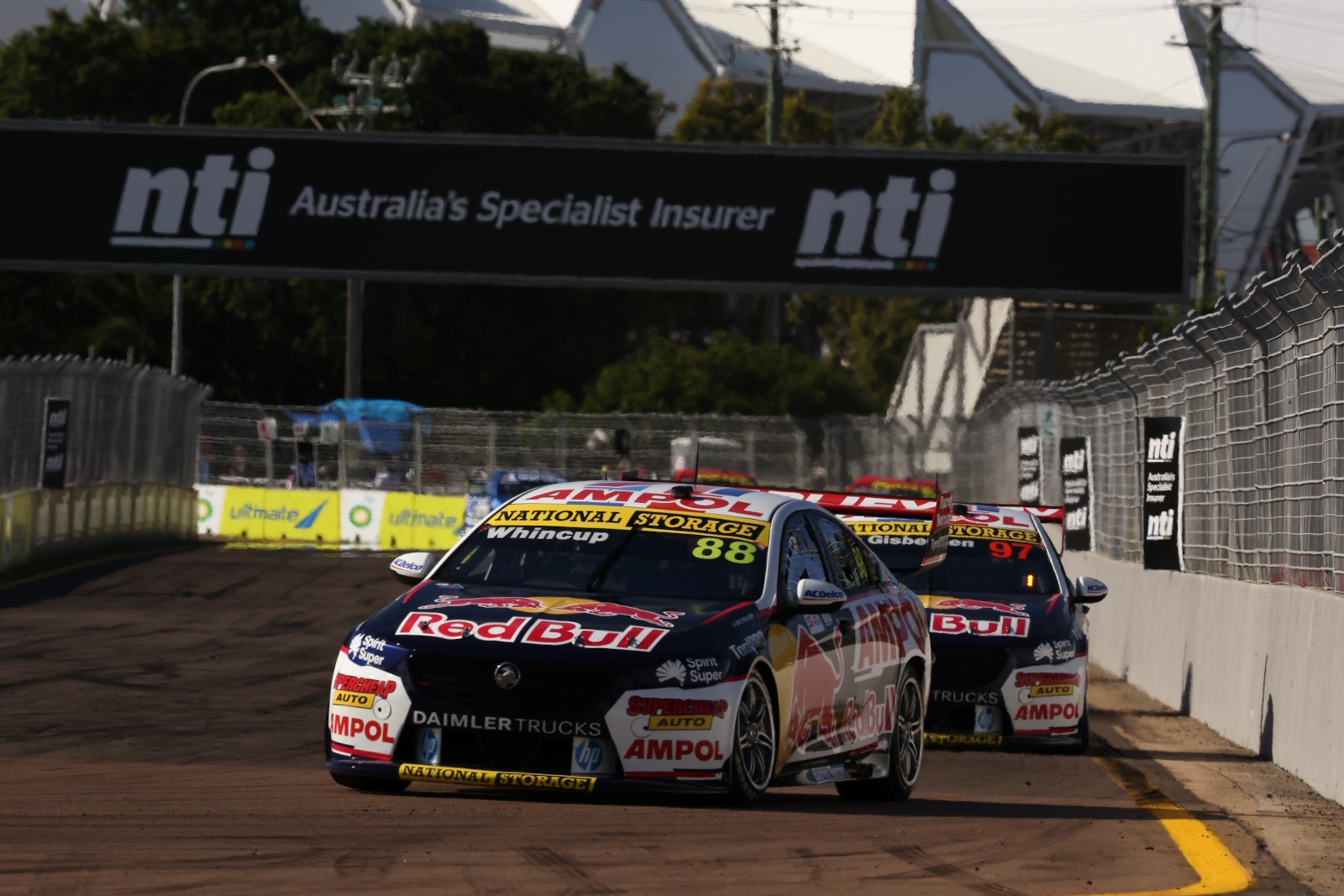 Davison, Waters, Hazelwood and Brown were covered by less than four seconds, with Slade enjoying a 15-second lead over Chaz Mostert, who had started 12th.

On lap 71, Brown cleared Hazelwood at the final corner and set off after Waters, who continued to chase Davison.

Van Gisbergen had slashed the margin to Whincup by 2.3s by lap 73, with the race leader again battling through traffic.

Time lost behind Jones saw Whincup fall into the clutches of his teammate, with the leader losing a second.

Once in clean air, the two Red Bull Ampol teammates were line astern with 13 laps remaining. Whincup’s valiant resistance ended at Turn 13, with van Gisbergen parking his car mid-corner to negate a return-serve.

Compromised on exit, van Gisbergen had to defend from Whincup at Turn 2, but the Kiwi quickly worked into a rhythm.

Having fallen away from the rear of Davison, Waters was forced to defend from a racy Brown, who was chasing a third top-five result of the year.

Brown made the move stick at the final corner with three laps remaining, much to the delight of the Erebus garage.

De Pasquale was 23 seconds adrift in third, with Davison, who has moved into third in the standings, 17 seconds behind his teammate.

"Again, thanks to Red Bull Ampol Racing; our cars were fantastic.

"Another subpar start from me and then I had to pay for it all race but I feel a lot better today.

"The pace from myself was a lot smoother and just awesome to get another 300-pointer."

Van Gisbergen will take a 245-point series lead over Whincup into next weekend’s WD-40 Townsville SuperSprint.