Shane van Gisbergen feared his wild ride through the Chase in the closing stages of the Supercheap Auto Bathurst 1000 was more than just the end of his victory chances.

Charging back from a restart error just a handful of laps earlier, van Gisbergen was running third behind Scott Pye on lap 150 when he speared off and into the sand trap at high-speed.

Determined not to become bogged, van Gisbergen turned hard left, risking a rollover as the car briefly dug into the sand.

The incident ripped the right-rear tyre off its rim, forcing the Kiwi to the pits and ending any hopes off pulling off a miraculous victory.

“At that stage the only chance we were going to have to catch Davey [leader and eventual winner Reynolds] was to get Scotty Pye as quick as possible.

“At that point I wasn’t actually trying to pass him because it was still quite wet [off line].

“I was really close through the Chase and thought I’d pop out at the bottom, but at the kink he played it perfect, he missed the apex by a tiny bit and that made me go in the water.

“I knew I was going off at a rate of knots, but I had to aim it left so that I could carry back on the track down the hill.

“As soon as I tried to point the nose it just snapped sideways on me. I was looking out the side window at the sand trap thinking I was going over.

“Luckily due to all the rain it was quite hard packed. Somehow we got away with it because that should have been a big shunt.

“But it was a bit of a bummer because I think we had speed and fuel over him [Pye] and then would have done all we could to put the pressure on Dave.”

The incident happened just seven laps after van Gisbergen had slid out of the lead at Murray’s Corner as he attempted to bring the field back to green on a Safety Car restart.

Although there was still a question over fuel, it appeared very much van Gisbergen’s race to lose at that point following a remarkable comeback.

The car had gone a lap down early in the race as co-driver Matt Campbell had a nightmare first stint, struggling to keep the car on the circuit.

“I’m still not sure what to think about it all. At the end of the day we threw away a chance to win the race a couple of times,” reflected van Gisbergen.

“That restart, we were saving a lot of fuel, so we weren’t warming our tyres and we got to that last corner and I thought I braked super-early and, as Garth said, it was just like ice.

“Coming back through the field, I don’t know how it happened, we went from 12th to third in only a couple of laps.

“I was pulling stupid moves coming back through, but we had nothing to lose at that point so I was just going crazy.

“When I look back at it in a couple of months, I’m sure I’ll think that it was a pretty bloody good car race.

“I definitely enjoyed it and I think all the guys in the bunker did as well. We’re all gutted right now, but shit we gave it a good go.”

Van Gisbergen added that Campbell’s struggles in his first stint were largely due to incorrect tyre pressures, which added to what was generally a difficult car to drive. 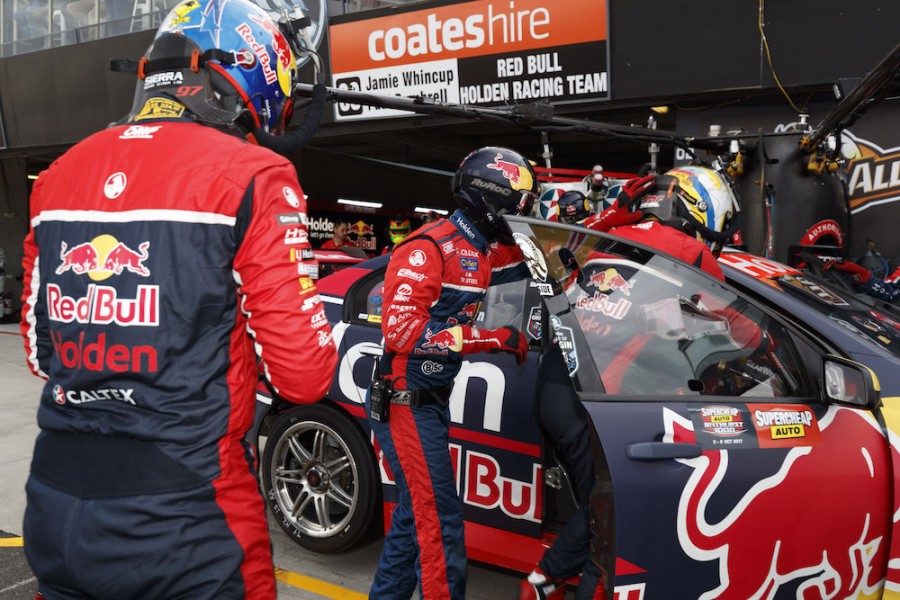 “We spent the first two days just trying to get it driveable,” explained van Gisbergen.

“I had a shunt on Thursday just because of how hard the car was to drive and you’ve got to push as hard as you can. We made the car better, so it was at least fast, but it was still very hard to hang onto.

“At the end of the first stint we were doing low 2:30s and then all of a sudden it was 2:40s. We just missed that and for Matty, he had to drive with the tyres under-pressured. They were suited to a track that was 10 seconds quicker and he just couldn’t stay on the track because there was no grip.

“For his next stint, they put the tyre up to the appropriate pressure and he was one of the fastest on track. He’s kicking himself a bit, but there are certainly other factors and when you look at his performance, apart from that stint, he was very good.”