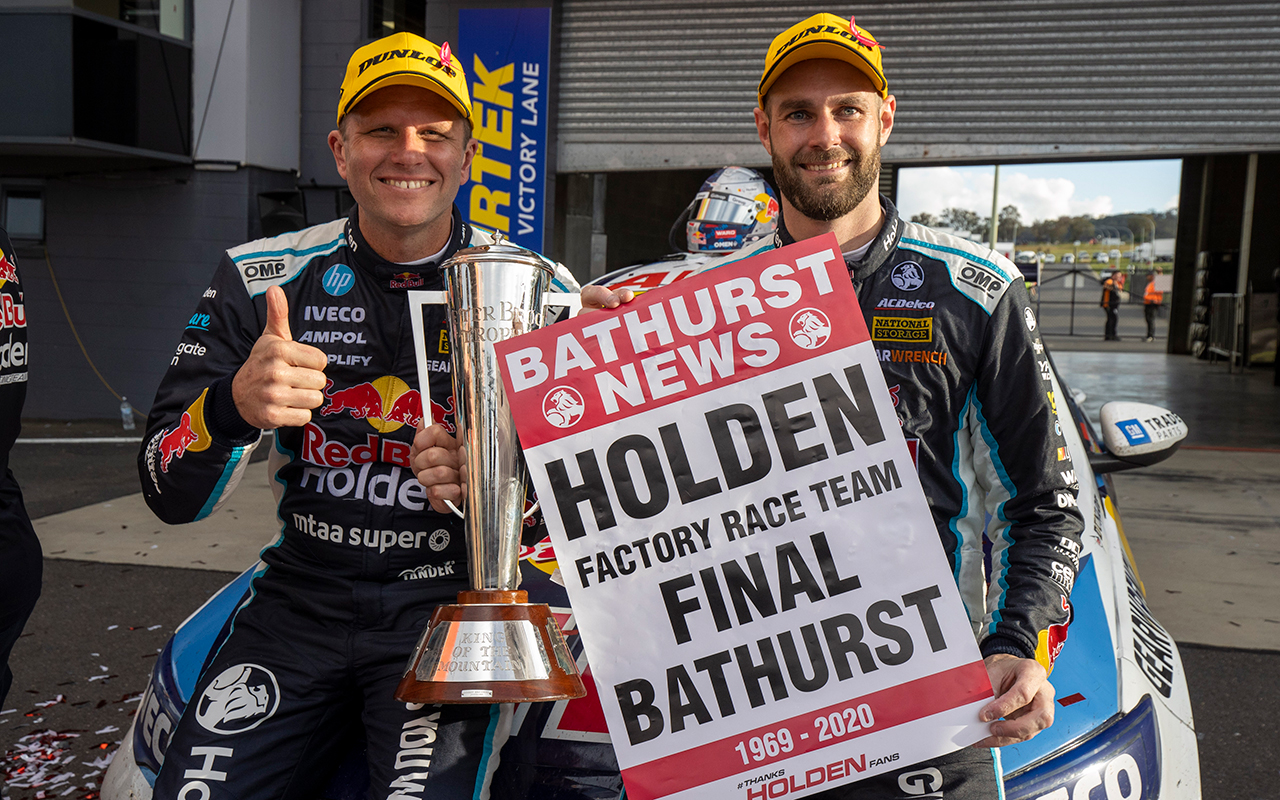 Shane van Gisbergen has broken through for a long-awaited maiden victory in the Supercheap Auto Bathurst 1000.

A two-horse race had emerged through the back half of the 2020 Great Race, as van Gisbergen and co-driver Garth Tander battled it out with polesitting combination Cameron Waters/Will Davison.

Just when it seemed like there would be a rare straightforward run to the flag – van Gisbergen having thwarted some Waters’ advances – the Mountain claimed a trio of rookies in the final 10 laps to bunch the field.

The Safety Car was called on lap 152 with Jack Smith beached at The Chase and Bryce Fullwood moments later crashing at The Esses.

A six-lap dash to the flag was then interrupted by Zane Goddard smashing into The Grate soon after racing resumed.

A short delay made for three final laps in anger to battle it out for the coveted Peter Brock Trophy and it was van Gisbergen who hung on, sealing the deal by twice setting the fastest lap of the race straight after the restart.

It capped an outstanding performance in his 14th start at Mount Panorama, having twice been runner-up.

“It’s just awesome,” beamed van Gisbergen, after picking up a Holden flag on his victory lap.

“The last few laps were really tough with the Safety Cars but the team did a faultless job and the car got better all weekend, so thanks to my guys.

“We had a great car and it’s a great way to send out Holden. Thanks to Garth, he did an awesome job. I just wish my Mum and Dad were here.”

He added of the late restarts: “I knew as long as I got through Turn 2 I would be fine.

“Each time he got pretty close but got through Turn 2 with good grip so I knew I would be ok. Those last three stints were just qualifying laps, so just awesome.

“It was a real track position race, super hard to pass and when that rain came I was a bit slow at the start but then got going.

“That got us to the front and we never left it. Awesome day.”

“It’s weird now being in a co-driver role, I would much prefer to be in the car at the end of the race having control over your own destiny but Shane was so good at the end there,” he said.

“This one will take a little while to sink in, it’s been such a strange year… a really special one, I’ll sit back and enjoy it.”

Waters was a fine second – clinching a career-best second in the championship in the process – just 0.8663 behind at the finish.

“I gave that absolutely everything I had," he said.

"I was trying to fuel-save and I tried to hang onto the back of Shane but he had a bit better deg than me and I just wasn’t quite close enough.

"I’ve never worked so hard in a race car."

Chaz Mostert took third for Walkinshaw Andretti United to give veteran co-driver Warren Luff a sixth Bathurst podium in the past nine years.

Rounding out the top five were the Shell V-Power Racing entries of Fabian Coulthard and champion-elect Scott McLaughlin, who is widely expected to make a full-time move to IndyCar next year.

A curveball had been thrown McLaughlin’s way with the cruel timing of a Safety Car called on lap 97 for the first case of Smith’s Commodore being stricken in the gravel.

The Shell Ford #17’s co-driver Tim Slade had been on the verge of completing his minimum 54 laps for the day when the race was neutralised, forcing Slade to drive an additional stint.

That left him exposed against primary drivers when the race restarted on lap 100, losing spots to Waters, Mostert and Coulthard.

An early penultimate pitstop got McLaughlin back in the car and he would bang out some quick enough lap times to jump teammate Coulthard when the rest of the lead pack dived into the pits for the sixth time.

Van Gisbergen though remained at the head of the field, with Waters staying right on his tail as third-placed Mostert closed in.

McLaughlin was the first to pull into the lane for his final stop on lap 138; Mostert followed two laps later, with van Gisbergen, Waters and Coulthard all stopping on lap 142.

Van Gisbergen had vaulted to the front of the field during a brief wet period a third of the way into an otherwise unexpectedly dry race and not even the late Safety Car twists could bring him unstuck.

Further back, Team 18 had another strong day, with Scott Pye/Dean Fiore and Mark Winterbottom/James Golding sixth and eighth.

It was a fine recovery for the IRWIN Holden after dropping to last when Golding bogged down on the start-line.

Either side of Winterbottom at the flag was Lee Holdsworth/Michael Caruso in seventh and Anton De Pasquale/Brodie Kostecki ninth.

James Courtney rounded out the top 10, completing a solid 18th birthday for his co-driver Broc Feeney.

It was not without some hairy moments though, Courtney being shown a bad sportsmanship flag for pushing teammate Jack Le Brocq onto the grass down Conrod Straight and then making contact with the back of Kostecki on the run to The Cutting.

Any hopes of a fairytale fourth Bathurst win together for Jamie Whincup and Craig Lowndes were dashed when the Mountain claimed its first victim on lap 33.

Whincup crashed out at The Cutting while trying to pass Brodie Kostecki, who later drew the ire of Mostert with his fierce defending.

With the #99 Penrite Holden not giving way, Whincup tried to hang on around the outside of The Cutting and paid the price for his impatience, causing the first Safety Car of the day as he whacked the wall.

Another came 17 laps later when Brad Jones Racing rookie Jordan Boys spun on the exit of Murray’s Corner into the inside pit straight wall.

That was the start of a nightmare run for BJR, with its gun pairing of Nick Percat/Thomas Randle being hamstrung by engine and power steering gremlins.

Capping the Albury team’s disaster, Macauley Jones lost control into Murray’s and punted the sister car of Smith into the sand trap.

Jones subsequently copped a drive-through penalty, having already had an early 15-second sanction for not pitting immediately after being issued a mechanical black flag as his drivers’ door flapped open.

Smith was dragged out back onto the track, only to later suffer a tyre failure into The Chase and find another sand trap.

Joining Whincup, Boys, Smith, Fullwood and Goddard on the DNF list was Garry Jacobson, who held back tears in a TV interview after parking up with an engine problem.

By the end, there were 14 cars left on the lead lap – two more than in 2019 – with David Reynolds/Will Brown finishing 15th after running on seven cylinders for the last chunk of the race.