However, the accolades remained for van Gisbergen, who became the first driver since 1994 to win the first five races of a season.

Van Gisbergen emerged from the heavy spray to lead into Turn 1, with fourth-starting Reynolds vaulting to third past Will Davison.

Davison escaped a wild moment on lap 3, with the #17 Shell V-Power Racing Team Mustang aquaplaning on the entry to Turn 2.

The two-time Bathurst winner recovered to 10th, and narrowly avoided contact from a number of following cars, including teammate Anton De Pasquale.

Reynolds continued his charge forward, taking second from Jamie Whincup at the back of the circuit.

Through six laps, van Gisbergen enjoyed a four-second lead over Reynolds, with Kostecki clearing Whincup for third off the final corner.

Chaz Mostert, who started ninth, kicked off the pit cycle in the leading group on lap 11.

Five laps later, Mostert, who entered the race 80 points down on van Gisbergen, was brought in with a throttle cable issue.

On the following lap, Kostecki, who started seventh, cleared Reynolds and set off after the #97 Red Bull Ampol Commodore.

Kostecki’s charge was dovetailed by a similar effort from Erebus teammate Will Brown, who through 14 laps, was up 14 places into the top five.

The #99 Boost Mobile Erebus entry began to close the gap to van Gisbergen, who was brought in for his mandatory stop on lap 26. 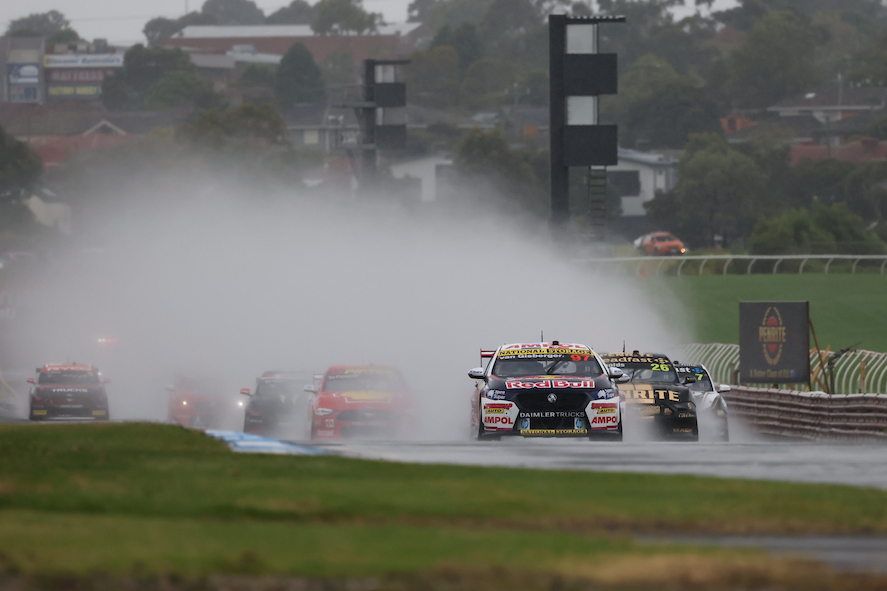 The #26 Penrite Racing Mustang was brought in on lap 31, with Reynolds released into clean air.

Kostecki took the lead, and Erebus waited until the third-last lap to bring its young charger in.

When the 23-year-old returned to the race, only van Gisbergen stood between Kostecki and a remarkable maiden win.

However, not even a collarbone injury could prevent van Gisbergen from claiming a fifth straight win to open his 2021 campaign, with the winning margin nearly 15 seconds.

Reynolds christened his 350th start with third, eight seconds down on Kostecki, with Whincup six seconds adrift in fourth.

Davison recovered to fifth ahead of Cameron Waters, who pipped Brown to sixth.

Todd Hazelwood and Nick Percat made it Brad Jones Racing entries in P8 and P9, with Mark Winterbottom rounding out the top 10.

Van Gisbergen will carry a 155-point lead over Whincup to the Beaurepaires Tasmania SuperSprint across April 10-11.