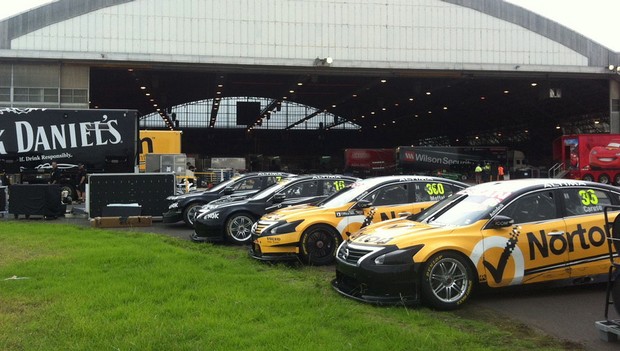 With back-to-back scheduling of the Tasmania Microsoft Office 365 andITM 400 Auckland, teams had to revise the usual routine to make it to NewZealand in time for this weekend.

Rather than packing up Sunday night and heading back to their respectiveworkshops, teams worked that night to carry out routine maintenance ahead ofleaving for the port of Burnie on Monday.

Teamshad to roll equipment onto a boat to Melbourne prior to 1.30pm Monday, ahead ofa 5pm cast-off.

According to Tekno Autosports team manager Bruce Jenkins, the onlydifference preparing for the two events was the shorter time frame.

“There’s a standard preparation we do between each and every event,which is no different even if we are away on a double header,” Jenkins said.

“We change uprights, gearboxes, look at all the componentry, servicethe cars and then are ready to run again.

“All of us had the same limited amount of time between the end of therace and when we have to run again on Friday in Pukekohe, so it was just aboutplanning the time we had and scheduling it in between the transport of the boatand the personnel on the flight to Auckland.”

The ship arrived in Melbourne at 7am Tuesday, so teams headed straightto Avalon Airport to meet the airfreight containers and load spares and tools(Nissan Motorsport cars pictured at Avalon). The cars were stacked one onone in specially built carriers before being loaded into the cargo Boeing 747.

Queensland-based Tekno, Erebus Motorsport, Red Bull Racing Australiaand Dick Johnson Racing crews departed Melbourne that afternoon, along withFord Performance Racing – these teams were permitted to unload at thecircuit after 8am today, with the remainder of pitlane allowed access from 6pm.

Jenkins said Wednesday and Thursday at Pukekohe was enough time before hitting the track Friday morning.

Driver and team owner Jonathon Webb agreed a back-to-back weekend justputs more importance on knowing what you need and factoring in all scenariosbefore leaving the workshop.

“You’re very restricted in what you can take to New Zealand becauseyou literally can’t fit it in the container.”

Jenkins confirmed the team was primed for Sunday night’s service andwith no major damage to either car over the weekend in Tasmania, themaintenance plan went ahead unchanged.

“We had the components ready and serviced before we headed toTasmania,” Jenkins said. “We’ve had freshly built uprights and freshly builtgearboxes ready to go.

“Not having accidents or breakages made it a lot easier on the guyswho have got to get the job done because we’ve had limited access to thevehicles this week.”

Practice begins at 10.10am on Friday.

TheITM 400 Auckland runs from April 12 to 14, with tickets through www.ticketek.com.au, from as little asNZ$30, with three-day general admission for NZ$110 and three-day grandstandsfrom NZ$145. Kids 12 years and under are free for general admission with aticket bearing adult.

Jonathon Webb  ›
15' Team Darrell Lea STIX ›
2013 ITM 400 Auckland  ›
Stay In The Know
Sign up to the Virgin Australia Supercars Championship Newsletter
We use cookies to ensure that we give you the best experience on our website. If you continue to use this site we will assume that you are happy with it.Ok