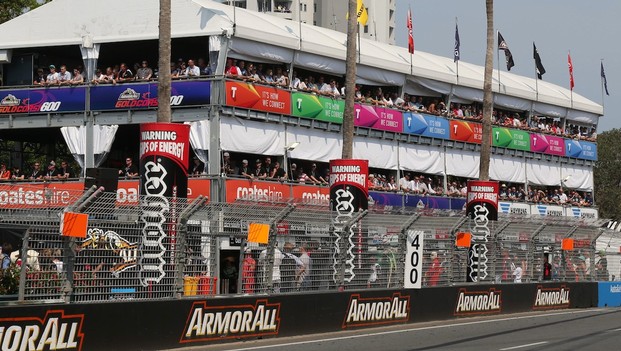 A crowd of up to 180,000 people will invade the Gold Coast for threedays of heart pumping V8 Supercars racing on one of the most exciting – andtoughest – street circuits in Australia.

Tickets for the event, priced from $48 for a pre-purchased single-day adulttrackside pass, go on sale this morning at 10am through Ticketek.

“The Gold Coast is not only home to V8 Supercar headquarters, but manyof our teams and drivers, which makes the weekend that much more special,” Mr Howardsaid. “Winning the coveted surfboard in front of a home crowd on the Gold Coastis one of the most sought after prizes.”

Gold Coast Mayor Tom Tate said the race weekend was critical to the GoldCoast as an event that draws fans and prime time coverage from across Australiaand the world.

“The ARMOR ALL Gold Coast 600 is an action packed weekendwith the best in motorsport and world class entertainment,” Mayor Tate said.

“This year is going to be bigger and better than ever, andwill draw fans from right across Australia. There’s nothing else like it.”

Mr Howard said this year’s event has even more prestige with theintroduction of the ‘Season of Endurance Trophy’ for the most successful driverpairing across the Sandown-Bathurst-Gold Coast triple crown.

“We’ve introduced the Enduro Cup, which recognises the most successfuldriver pairing from the Sandown 500, Supercheap Auto Bathurst 1000 and theARMOR ALL Gold Coast 600. It’s our version of State of Origin on an unforgivingcircuit that is a world renowned car eater.”

“We have amassive entertainment offering as the perfect partner for the edge of your seatracing. The Jim Beam 600 Sounds presented by SEA FM is an incredible feature ofthe off-track events that has had packed houses every night,” he said.

“In the coming weekswe will announce the amazing artists we have lined up for Friday and Saturdaynight – including one of the world’s most in-demand performers right now.

“We’re alsoadding new elements to our week-long entertainment program to ensure the ARMORALL Gold Coast 600 retains its reputation as the biggest party the Gold Coasthas every year.”

Tickets are available now through Ticketek.

06/06/2013
Related Content
2013 Armor All Gold Coast 600  ›
Stay In The Know
Sign up to the Virgin Australia Supercars Championship Newsletter
We use cookies to ensure that we give you the best experience on our website. If you continue to use this site we will assume that you are happy with it.Ok