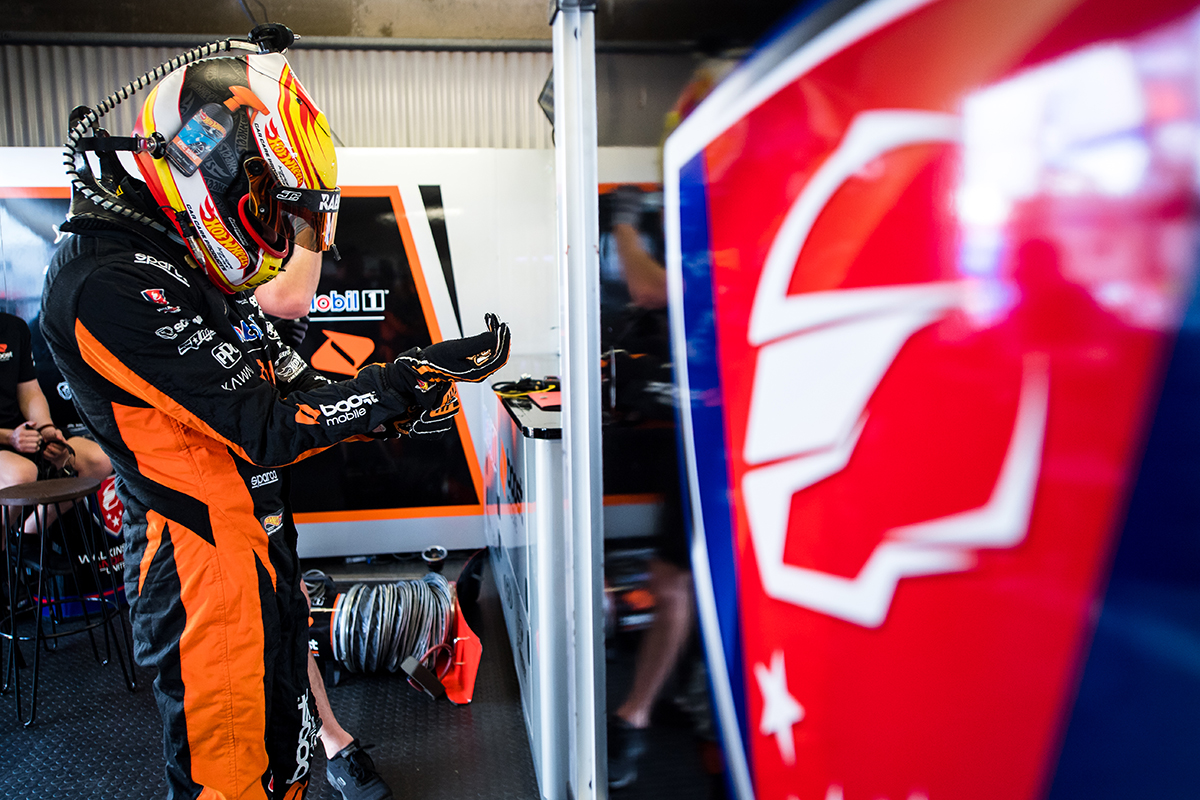 On first glance, not much has changed in the pecking order between the 2017 and '18 Virgin Australia Supercars Championship seasons.

A Shell Ford driver and Red Bull Holden driver fill the top two places in the title fight and Scott McLaughlin is still the man to beat over a single lap.

But dig a little deeper and there's been some pretty clear winners and losers among the drivers and teams year-on-year.

With 16 of the year's 31 races complete, Supercars.com runs you through the winners and losers of 2018 to date.

The biggest mover so far in 2018 is Mobil 1 Boost Mobile Racing, and drivers Scott Pye and James Courtney.

In its first season with international partners Andretti Autosport and United Autosports, the former factory Holden team has regrouped from a lacklustre 2017.

Both drivers have two podiums to their name and Pye a maiden win at Albert Park.

Courtney is the chief mover so far in the drivers’ championship; his 10th in the standings is 11 better than where he finished 2017, 21st.

Pye is six places better than the 12th he took in his first season with the squad and leads the way with sixth in the 2018 points.

WAU is also the outfit to have gained the most places in the teams’ championship, currently sitting third after falling to seventh last year.

Like Pye, Nick Percat is in his second year with a Holden squad and has made inroads.

From 19th with a single podium in his first season with Brad Jones Racing, Percat has made two trips to the rostrum in 2018 and heads to Townsville 12th in the points.

While team-mate Tim Slade is sitting where he finished in 2017, in 11th, BJR has moved up three places in the teams' points, to fifth.

Elsewhere, former champions Craig Lowndes and Rick Kelly are both enjoying a resurgence.

They have already won races in 2018 and are six places better than where they finished ’17, in fourth and eighth. 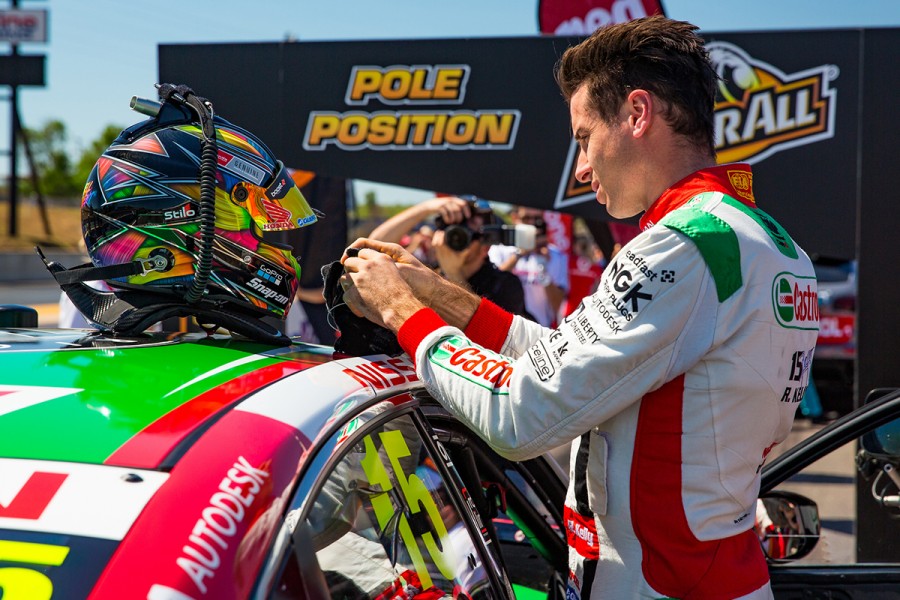 Lowndes is enjoying life with the new ZB Commodore while Kelly is making the most of an improved Altima, ending his own six-and-a-half-year run between victories at Winton.

Despite Kelly's highlights, though, Nissan Motorsport's top teams' championship entry is one place lower than at the end of 2017, sitting seventh.

A gain of four places from a strong 2017 meanwhile has Erebus Motorsport’s David Reynolds in the title mix, in third place.

Underlining Erebus' rise, rookie Anton De Pasquale is 17th in the standings, six places ahead of where the team's #99 entry ended last year with Dale Wood at the wheel.

The squad has gained one place in the teams' championship since 2017, moving ahead of Tickford Racing and Garry Rogers Motorsport, but falling behind WAU. 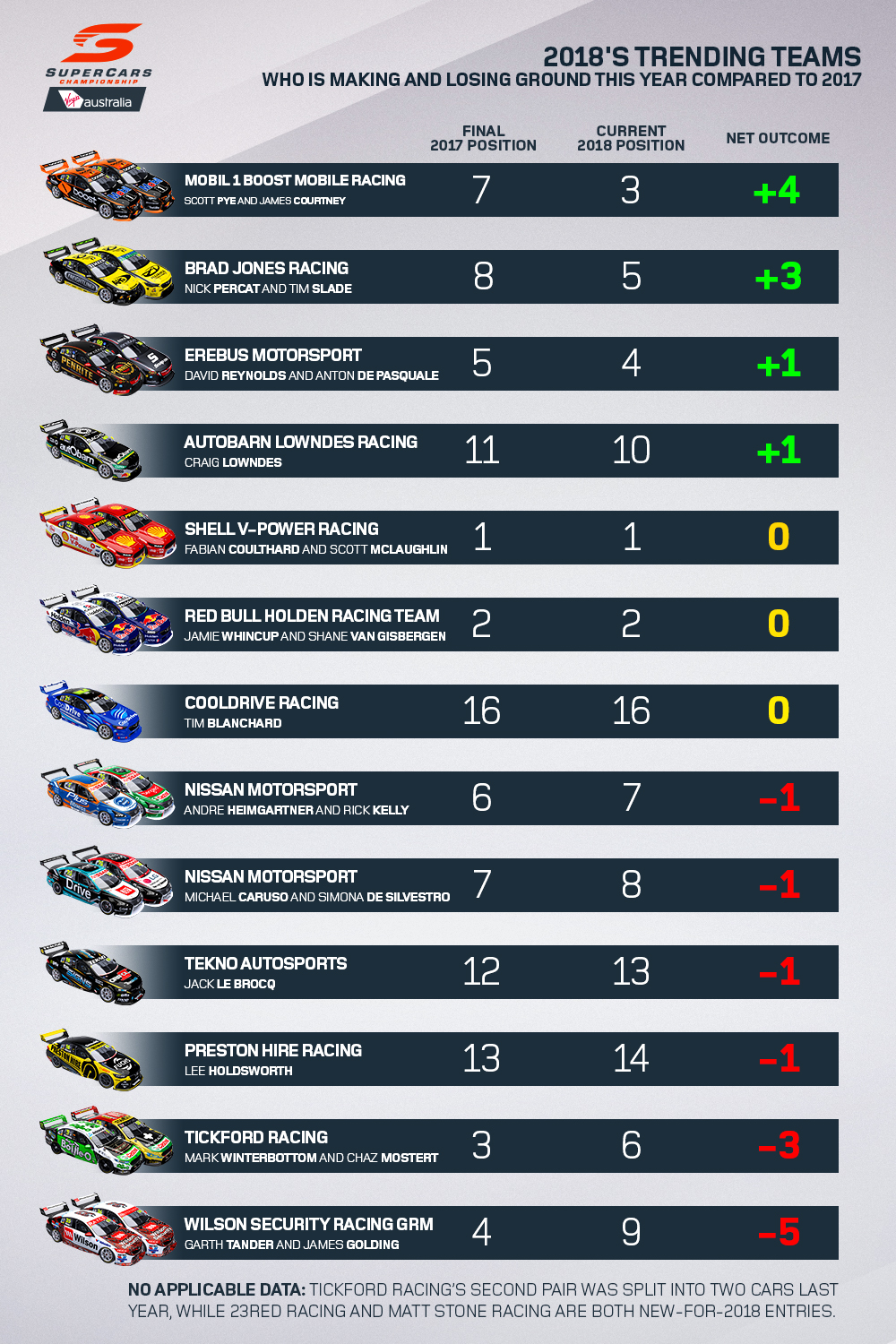 It’s little surprise to see Tickford drivers at the wrong end of the positions gained or lost table, given its tough run in 2018.

Cameron Waters and Mark Winterbottom, currently 18th and 14th, are 10 and eight places down on where they finished last season.

Winterbottom has the team’s only podium to date, while Waters has suffered three mechanical failures in the last four races.

Chaz Mostert has fared slightly better, and is its lead driver in the standings. 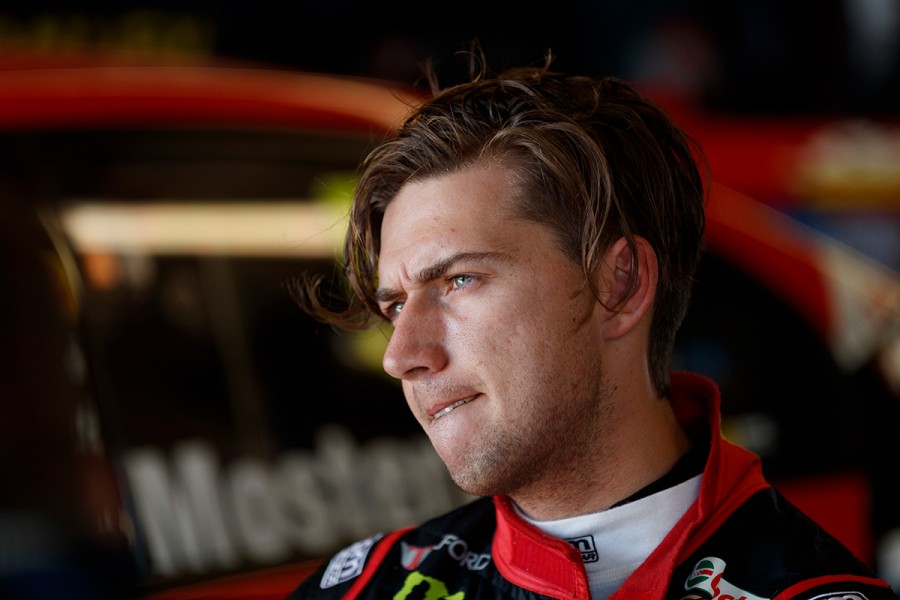 He still, though, sits ninth, a loss of four places having been a 2017 title contender until the closing stages.

Its top teams' championship pairing is down from third in the standings to sixth, falling behind Walkinshaw, Erebus and BJR.

The other big loser has been GRM, falling five places in the teams' standings to ninth.

That is largely due to James Golding's rough start to his rookie campaign, with his last in points nine places behind where James Moffat finished 2017.

While their teams remain strong, Triple Eight's Jamie Whincup and DJRTP's Fabian Coulthard are among the drivers to fall down the order in 2018.

Last year's champion Whincup is down four places, while Coulthard – third last year – is now back in seventh. 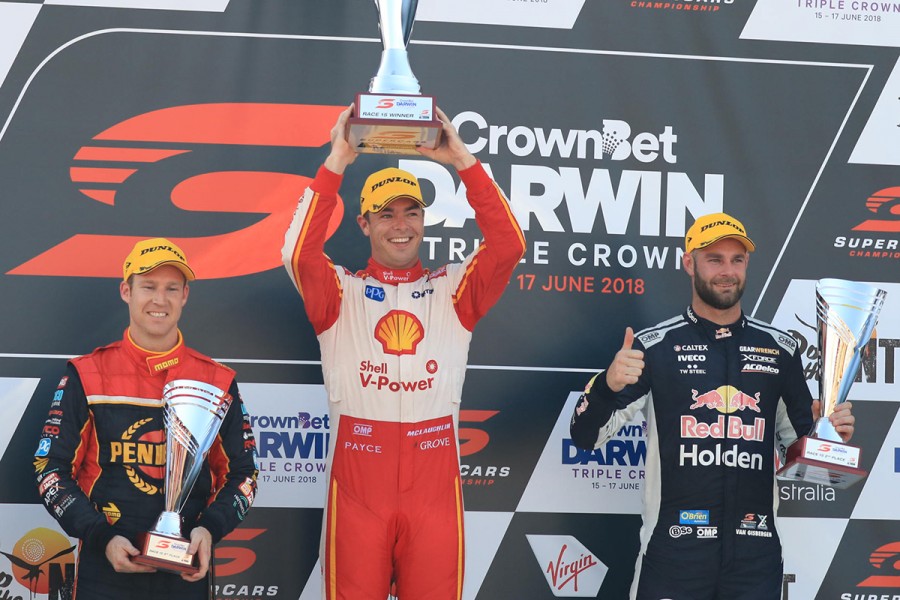 Season to date, the spread of winners has increased dramatically in 2018.

In 2017, only Shane van Gisbergen, Coulthard, Mostert and McLaughlin had taken victories through to Darwin, while Whincup joined that list in Race 14 of the campaign in Townsville.

After 16 of the year’s 31 races, there have been eight winners; van Gisbergen, McLaughlin, Whincup, Pye, Reynolds, Lowndes, Kelly and Coulthard.

Those winning drivers aren’t the only ones to have tasted champagne, with 12 drivers having finished on the podium so far, compared to 11 through the same period of 2017.

With six so far in 2018, there has also been one additional ARMOR ALL Pole Award winner this year.

Van Gisbergen, McLaughlin, Whincup and Kelly feature on the list both years, joined last year by Coulthard and this season by Lowndes and Reynolds.

Despite the greater volatility in results, the points gaps at the front of the field have increased.

The margin currently covering the top three in 2018 accounted for the top five this time last year, with four more races completed this time around, due to Albert Park’s upgrade to championship status.