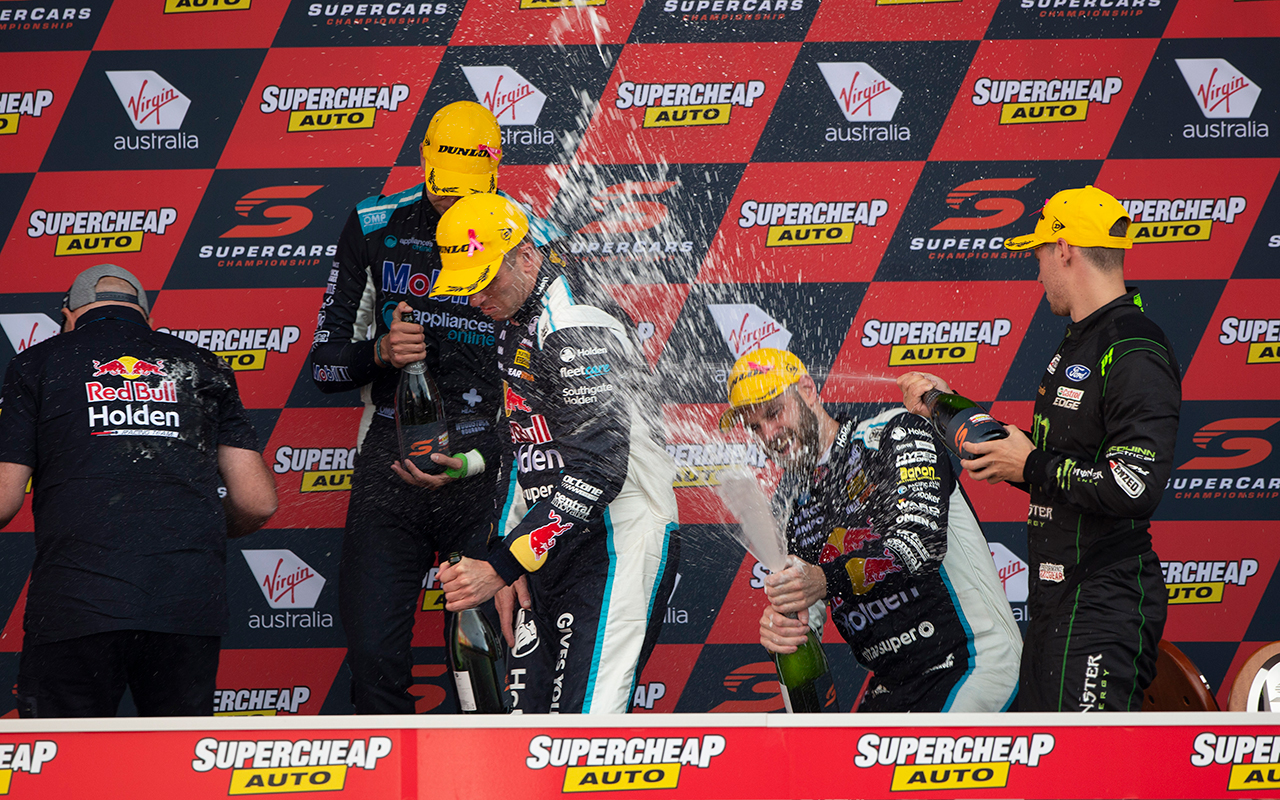 Heavy rain that was expected to dominate Sunday’s Supercheap Auto Bathurst 1000 never came, but the few drops that did fall decided it.

Shane van Gisbergen and co-driver Garth Tander’s victory will be remembered for the Kiwi’s efforts to hold out a determined Cameron Waters over the final three stints of the 161-lap contest.

What won the race though were two sublime laps from van Gisbergen in slippery conditions following a lap 54 Safety Car restart that culminated in passing the Monster Mustang for the lead.

The Ford, then driven by co-driver Will Davison, had been the pacesetter all weekend, scored ARMOR ALL Pole and to that point had the race in command.

“It was crazy,” van Gisbergen reflected of those critical damp laps where, expecting the rain to be light and brief, all the front-runners remained on slick tyres.

“On the Safety Car lap [the rain] started at The Cutting and then as we got to the back straight it started to rain there. You just had no idea what it was going to be like.

“I was third at that stage [behind Davison and Scott McLaughlin] and I just went a little bit later than the guys in front, where they were braking.

“If they made it around the corner I’d get off the brake and try and go a bit quicker. It was working, but I got to the front and I was just lost. When you’re the pioneer you don’t know where the grip is.

“Fabian [Coulthard] caught me and I thought I was in trouble, but that set us up in the race because as we know in these cars, it’s impossible to pass really.

“Every time Cam caught me [in the closing stints] I put the car in the right spot for a couple of laps, [his car] got hot and then I got on with my day.”

Following the race, memories of that stint still appeared raw for Davison, who had been chasing a fairytale win after losing his full-time drive early in the season thanks to a sponsor withdrawal.

“Cam had done a good job of getting a buffer before I got in the car,” he said, labelling the moments that followed as “certainly stressful”.

“Being in someone else’s car in that situation, it wasn’t a nice feeling, being the pioneer, the conditions were exceptionally tough.

“Normally it’s top of the mountain one [condition], the bottom the other, but this was literally corner to corner where you had massive grip or treacherous conditions. Then it would dry out very quickly.

“Thinking back to that crucial moment, tough, I did all I could.

“I’d been sitting on the couch for six months, in Cam’s car, and with those boys behind me in those conditions, I certainly knew I could throw it away very easily.

“I did all I could and Shane just snuck under me there.”