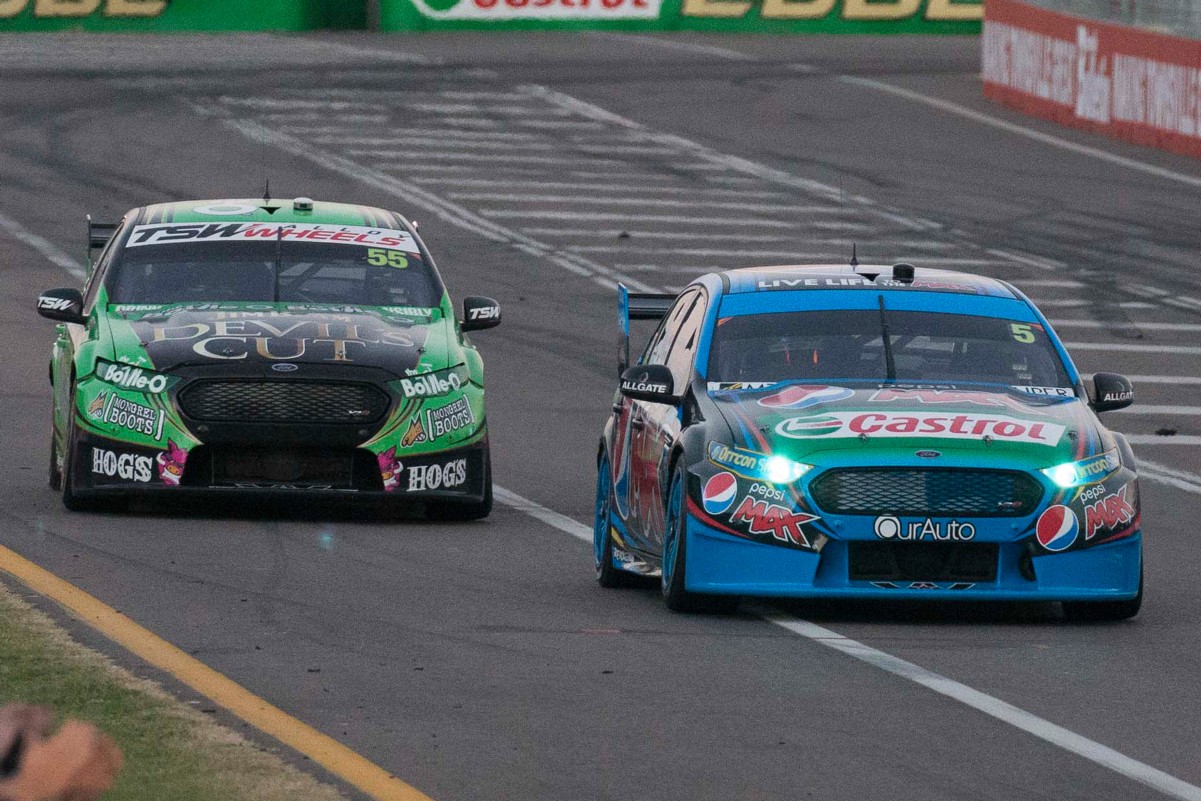 Two rounds remain before the V8 Supercars Championship trophy is awarded and Mark Winterbottom remains favourite to take out his first title.

But while the title was ultimately won at Phillip Island last year, chances are it will head to the grand finale this time around, with second and third placed challengers David Reynolds and Craig Lowndes separated by just one point and eating into Winterbottom’s lead across the last two rounds.

There are six drivers still mathematically in contention but if Winterbottom has a solid run on Saturday at Phillip Island, that will start to whittle down.

Here’s a look at the Championship picture as it stands.

Six drivers could mathematically win the title, given there are 600 points remaining. Saturday races at Phillip Island and the Coates Hire Sydney 500 are worth 75 each, with the longer Sunday runs effectively double points with 150 for the winner.

Winterbottom leads Reynolds by 239 and Lowndes by 240 – those two are the key competition.

Garth Tander is next on the totem pole 482 points behind. The Holden Racing Team hero, fresh off winning the Pirtek Enduro Cup, is gunning for a top three finish this season. He’s 243 behind Reynolds and heading to two places he lost races in the last seconds last year – but is yet to register his first win in 2015.

Shane van Gisbergen is fifth on the ladder and 510 points behind. Speaking to v8supercars.com.au the Kiwi driver did not know and was not interested in the gap, which he’ll check out at the end of the season. It’s a big ask for the title but he could still jump in the order before the final chequered flag.

Fabian Coulthard is the furthest away with a gap of 527 points and if he fails to score points in Saturday’s first race, will already be out of the running if Winterbottom wins.

Defending and six-time winner Jamie Whincup dropped out of the race over the weekend in Auckland but stated he’d be happy to give the #1 to “the guy that deserves it the most”.

Could Winterbottom win it at Phillip Island?

Yes – Frosty could win the title on Sunday, but not before, and it would be a big ask.

If Winterbottom is leading by 301 points at the end of Sunday, he has most likely won the 2015 title. He needs to extend his current margin over Reynolds by 61 points to be unbeatable.

If Winterbottom wins all three races at Phillip Island, Reynolds will need to finish fourth or better to have a mathematical chance.

Finishing fourth in the three races, the difference would be 299 heading into Sydney, with only 300 on offer.

However, even if Reynolds does not score any points on Saturday at Phillip Island, the gap would not be big enough to secure the title – and Lowndes would be lurking.

If Winterbottom wins all three races, Lowndes would also need to finish fourth or better – but finishing fourth, the gap would be 300 and other factors would need to come into play.

If Lowndes finished third in all three races at Phillip Island and Frosty won, he would leave with a 283-point margin to Winterbottom.

In the last two years since becoming a three-race event, not one driver has clean-swept the Phillip Island meeting. Of the three drivers, Lowndes has the best record at the venue with nine wins. Winterbottom has two wins and Reynolds is yet to stand on the podium there.

Hold on a minute…

While Winterbottom would most likely win if he left Phillip Island with a lead over 300, penalties could come into play. If Winterbottom crashed out of Sydney early and caused an incident, he could fail to finish and be slapped with a points penalty that would eat into his lead. Michael Caruso finished Saturday at the Clipsal 500 this year with negative four points after a penalty and crash.

We have also seen teams excluded from previous races after issues with the cars. Last year in Sydney, DJR and Scott Pye were excluded from the Gold Coast and Phillip Island events because of a technical infringement, causing him to fall from 16th to 19th in the Championship.

This year at Queensland Raceway James Moffat was excluded from qualifying and both races on Saturday when an engine seal irregularity was found during a random check.

Of course, these are not common occurrences, and Winterbottom has not been served with a points penalty all season.

How Jamie did it

Last year, Whincup won the Championship on the Saturday at Phillip Island after an almighty comeback. He was as low as seventh in the Championship after the Clipsal 500 – with Winterbottom leading for some of the season. He took the points lead back at Queensland Raceway, though, and did not look in the rearview mirror from then on.

Coming into the penultimate round, his lead was 402 points over Winterbottom after winning on the Gold Coast.

He finished third in the first race at Phillip Island and by Saturday evening he had a 461-point gap over Mark Winterbottom and could not be stopped with only 450 points remaining for the season. Winterbottom finished the race third, but it was not enough. In fact, after a tough run at the Homebush finale, Winterbottom fell to third on the tally behind Shane van Gisbergen.

Spare a thought for Chaz Mostert

There is one key player missing from the final chapters of the story – Chaz Mostert.

Mostert was in second place and 198 points off Winterbottom before his season ending crash at Bathurst and it’s hard not to wonder how the fight would have played out between the teammates had it gone down to the wire.

He still sits eighth in the Championship, and with 10 ARMOR ALL Pole Positions looks as if he will take the Pole Award this year, with only two drivers – Whincup or Scott McLaughlin – able to stop him if one earns every pole position left to take. Either would beat Mostert on countback if that was to occur.

Moving in the right direction