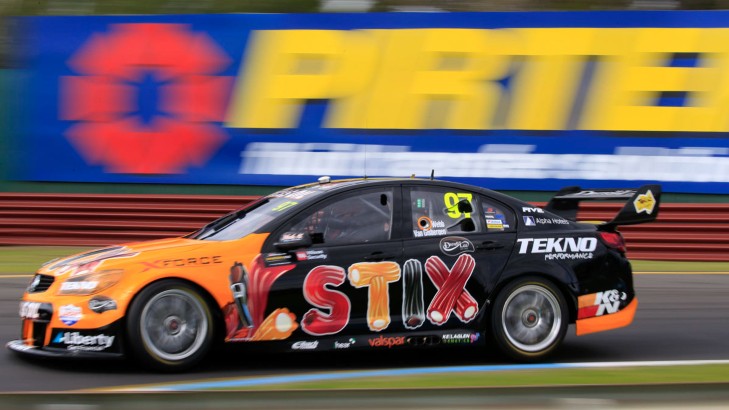 Tekno Autosports owner Jonathon Webb expects to have at least a handshake deal done with his 2016 driver by the time he heads to the Supercheap Auto Bathurst 1000.

And he has also made clear Tekno's highly-rated team manager, Formula One veteran Steve Hallam, is staying with the team despite media and pitlane speculation he is moving on to DJR Team Penske next year.

"There are three (drivers) there (on the list), but it's probably pretty close to getting down to two," said Webb. "So we are whittling them down pretty rapidly.

"I am pushing hard in the background to try and lock away a driver or at least have - if nothing else - a handshake going forward before Bathurst."

Webb said the speculation about Hallam had caused some angst with both sponsors and potential drivers keen to know if the reports were true.

"That kept me up to midnight replying to queries, because we are trying to lock away drivers and sponsors and everything else and we have verbally told them Steve is staying," Webb said.

Webb said the rumours might have got some legs because Hallam has a relationship with DJRTP owner Roger Penske that dates back 25 years and they had got on well when they had met up at the Clipsal 500 earlier this year.

"There is a strong relationship there for sure, but Steve's more than happy working with us and from our side we are enjoying having him."

While Webb wouldn't name names, it is thought out of contract Walkinshaw Racing driver Tim Slade is on his driver short list along with David Reynolds, whose future at Prodrive Racing Australia is uncertain.

Others potentially in with a chance include Nissan Motorsport's James Moffat and stand-in DJR Team Penske driver Scott Pye.

Pye is the protg of Roland Dane, the owner of Triple Eight Race Engineering, the organisation with which Tekno has a technical alliance and where van Gisbergen moves in 2016.

But driver market hot property Fabian Coulthard, who is now odds-on to drive for DJR Team Penske, is believed to have never been in serious negotiation for the Tekno drive.

Webb also ruled himself out of returning to the cockpit full-time himself some time ago, although the former development series champion showed strong form at the Wilson Security Sandown 500, where he and van Gisbergen finished third.

They will enter Bathurst as one of the favourites and will be keen to avenge last year's near miss when a starter motor failure at their last pit stop robbed them of a shot at victory.

An upbeat Webb said he was pleased with the way he and Hallam were making progress toward nailing down both the driver and the sponsorship arrangements for 2016.

"It has progressed massively (in recent weeks) and all in the right direction. I can't get into the nitty gritty but the plan in the ideal world was that Shane was off but we would put another driver behind the wheel and everything else just rolls on for another year.

"At the moment that is the way it is looking.

"I needed a couple of things to fall into place for our program to work. Those things have fallen into place over the last four to six weeks and we are now going to push on and try and get our side of it sorted."

One key was the retention of Darrell Lea as naming rights sponsor of the team. The confectionary brand is owned by Tony Quinn, who has had a major sponsorship arrangement with Tekno dating back to 2013.

"We are comfortable with Tony, we have had a good chat with the Quinn family and they are enjoying working with us and certainly working with Steve Hallam. There is a good relationship there that is really strong."

Webb said Quinn was being "kept in the loop" on Tekno's driver considerations.

"There's no use turning up next year going racing and we have got a guy that's going to run around the back in 25th. Tony's obviously had expectations because since he's been with Tekno we've had a car at the front.

"So we want to make sure he's happy and he's comfortable we are doing the right thing for our brand, Tekno, and also for his brand Darrell Lea."