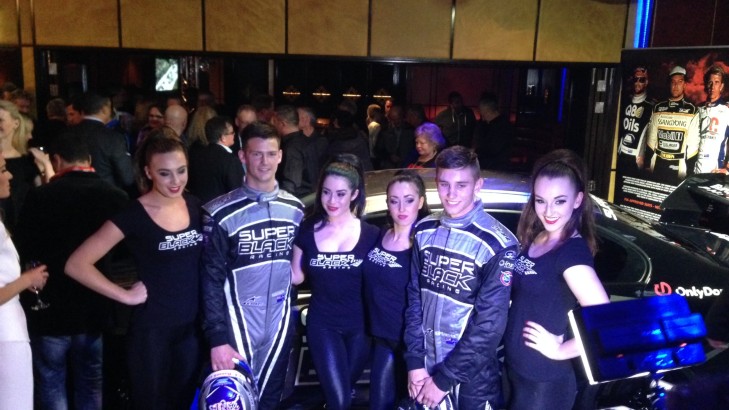 The covers have come off the Super Black Racing Falcon that will tackle the Mountain in October's Supercheap Auto Bathurst 1000.

Heimgartner and Pedersen currently race in the Dunlop Series and New Zealand's V8 SuperTourers category, with Heimgartner to make his V8 Supercars debut at Bathurst, while Pedersen will make just his second career start in the Championship.

Twenty-six year old Pedersen said taking the covers off the car was "pretty full on" and really hit home that in a month's time, they would be headed to Bathurst to compete against the regular stars of V8 Supercars.

"It's pretty real now ... but great to be a part of what is something special," he said.

"For Andre and I it's a real honour to go to Bathurst and represent the Kiwi brand - really excited, absolutely.

"It's never easy in this game, but for us, we race in the New Zealand SuperTourer series and I've won races against (main game Kiwis) Shane (van Gisbergen), Scott (McLaughlin) and Greg (Murphy), so it puts it in perspective - if you give yourself the right opportunity with the right resources and a good team around you, you can have a crack at it.

"We have a great opportunity with this team and the resources of FPR - they've won Bathurst, so that speaks for itself in terms of what they can help us with."

Nineteen-year old Heimgartner recently told v8supercars.com.au the Bathurst drive would be an audition for a Championship drive in the future.

"It's all starting to come to life - I heard about the idea only a few months ago and I was told I was driving ... next exciting thing is a test," Heimgartner said.

"It's come very quick, Bathurst is just around the corner so next thing I know I'll be sitting on the grid.

"I don't have any real expectations - I expect to finish, but that will be a battle in itself. We just have to go out there, try to finish and the result will just be there hopefully."

The Falcon will be on display at the Wilson Security Sandown 500 from September 12-14, and shortly after the team will run a test day to ensure everything is running smoothly and the drivers are comfortable in the car.

Super Black Racing team owners Tony Lentino and Andrew Hiskens are intending to continue on and enter the 2015 V8 Supercars Championship, and are also keen to contest the Dunlop Series.

The connection between Super Black and FPR was primarily established because of a friendship of more than 20 years between Lentino and FPR co-owner Rusty French.

Memories are made at the track

Percat: We can be the future stars!

Pirtek Enduro Cup countdown is on

Andre Heimgartner  ›
Ant Pedersen  ›
2014 Supercheap Auto Bathurst 1000  ›
Stay In The Know
Sign up to the Repco Supercars Championship Newsletter
We use cookies to ensure we give you the best experience on our website. If you continue to use this site, you agree to the terms and conditions identified in our privacy policyOKPrivacy policy