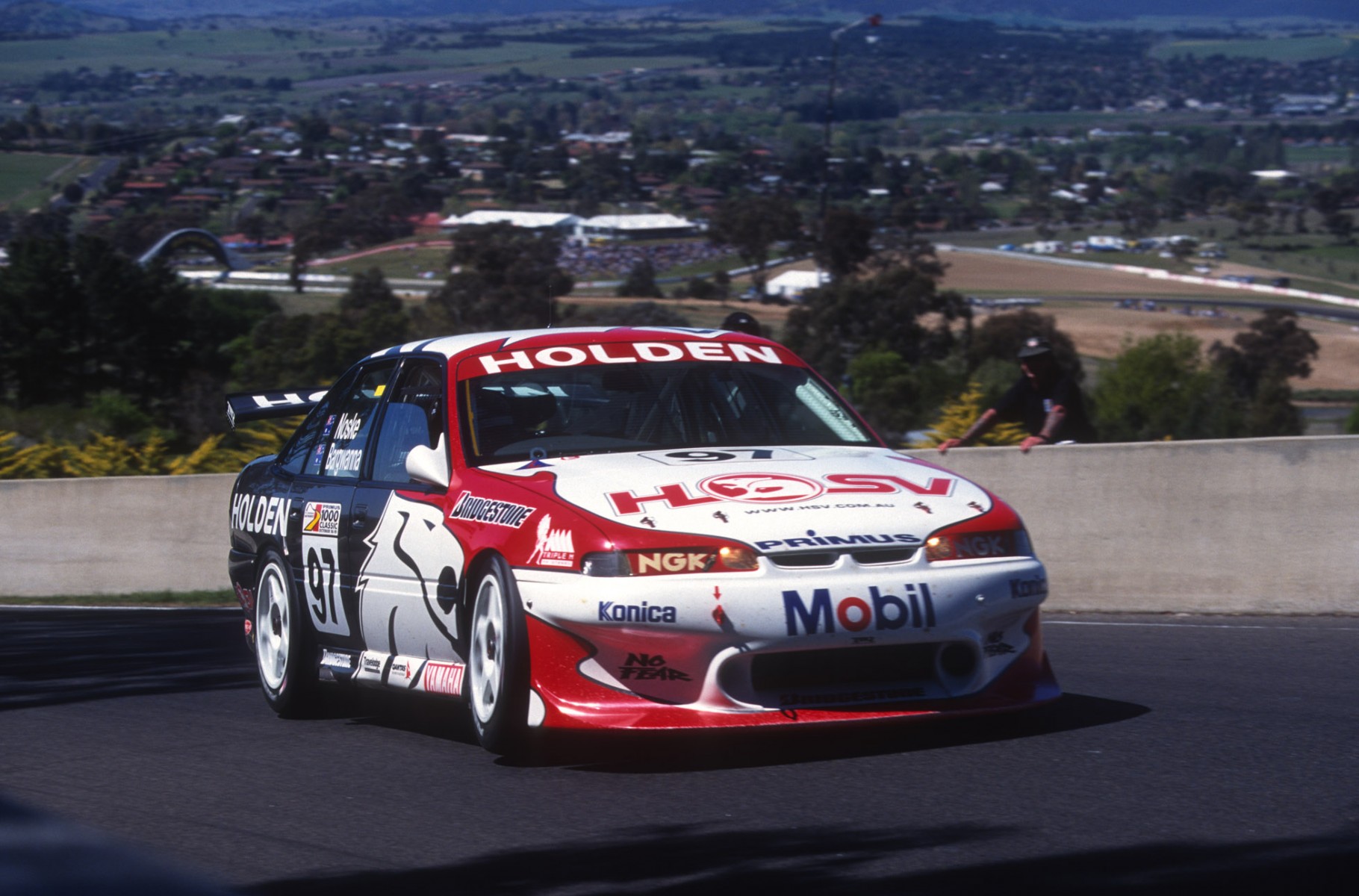 A Young Lion, a full-time driver, a team owner and an endurance regular - Mark Noske filled many shoes throughout his 15-year stint in the Supercars paddock.

The then Formula Ford front-runner made his first appearance in a V8 as co-driver to Andrew Miedecke in Allan Moffat’s distinctive Cenovis Falcon at Bathurst in 1995.

He drove in the enduros the following year for Gibson Motorsport and was then selected as one of the inaugural Holden Young Lions in 1997.

Run by the Holden Racing Team, the Young Lions program gave Noske the opportunity to drive the best equipment with the backing of a leading team.

But how far up the Supercars ladder did it take him? We tracked down the now 42-year-old Victorian to talk about his time in the top level of Australian motorsport.

Before we rewind the clock, what do you do with yourself these days?

I manage trucks in a log harvesting business down in Portland in rural Victoria. We’ve got one side of the business that cuts and processes the trees and the other side transports the plantation logs to the receive plant.

I’m looking after that, and occasionally, filling in actually driving the truck. So still doing plenty of driving, just a little slower! 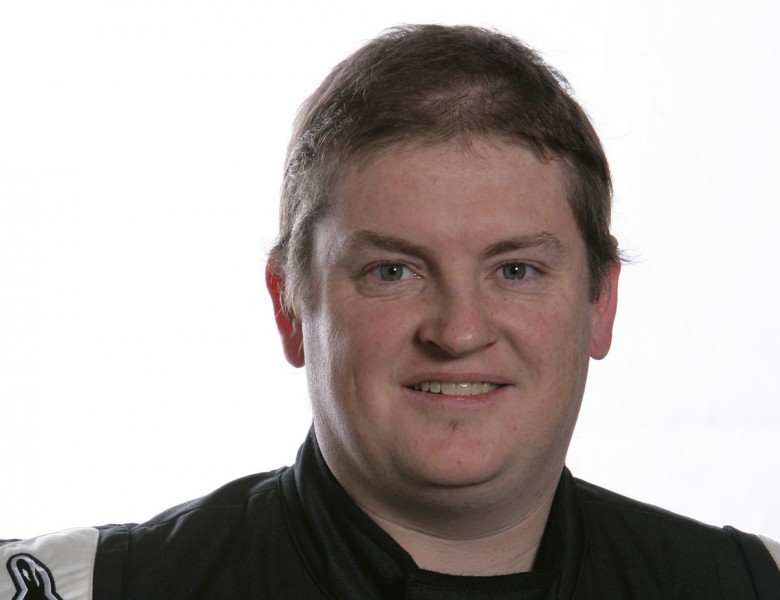 Your inclusion in the inaugural Young Lions program was what properly kick-started your Supercars career. Can you recall the first time you got wind of the deal and how it all came about?

I first heard about it at the end of 1996 on the back of the success that Craig Lowndes had in the Touring Car Championship.

I’d known Jeff Grech (HRT team manager) previously from when my Dad had a Group A Commodore at Larry Perkins’ team when Jeff was working there.

It was at the Bathurst Leagues Club in 1996 after the 1000. We were having a few cans of courage at the end of a long day, and I went up to Jeff, congratulated him on HRT’s Bathurst win, put my arm around him and said “when can I drive one of your cars?”.

The whole thing really came from there. Myself, Jason Bargwanna, Stephen White and Todd Kelly were selected as the four drivers, and really it was an enjoyable program to be involved in.

It was quite a comprehensive youth program, too. It was more than just testing. You got to do some standalone races, endurance races and other activities. You were really taken under their wings.

Yeah, that’s right. Out of the four of us, I’d had some Supercar experience, so they put me in the car for the Australian Grand Prix.

But we were all heavily involved in the training program. They put together a pretty comprehensive fitness program together for us, sports psychology.

We spent a lot of time at the race team, going to debriefs, and a lot of the times we’d go to the race tracks, even if we weren’t racing, just to fit in and absorb it. We also did a lot media training – it was a very good program.

We did a lot of testing too. It was something like 7,000km of testing through the year, which is a bit different to what the young drivers get these days.

When we got to the Sandown 500 and Bathurst that year, ‘Bargs’ and I were on the pace and not just making up the numbers.

The funny thing with the testing was that we never did a single day in the rain, so when we got to Sandown, it was torrential, and I drew the short straw and had to start the race! It was a baptism of fire. 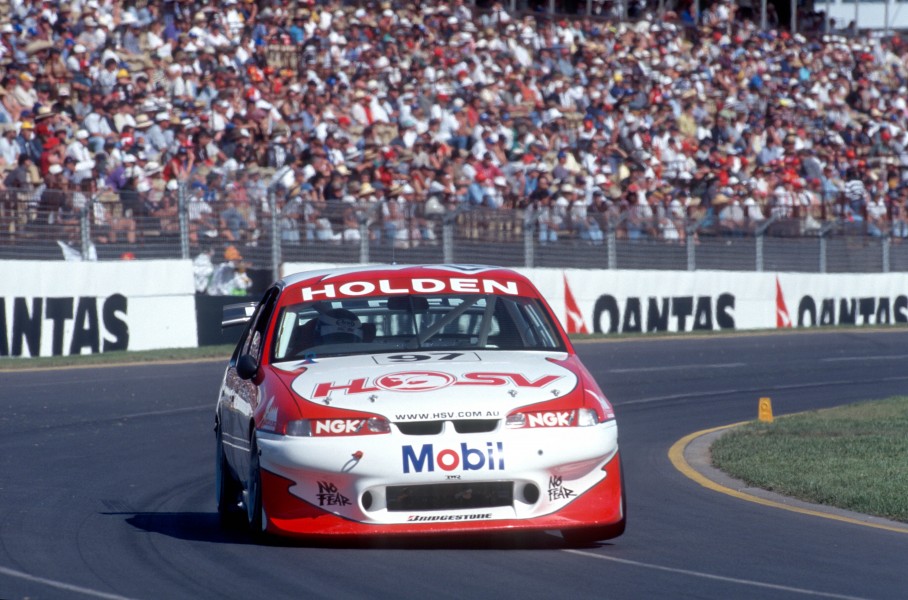 You went to Bathurst in 1997, and it was a huge weekend for the Holden Racing Team. Three cars, Peter Brock’s farewell race, the HYL car was on provisional pole, but it turned out to be a horrid race day. Bargs crashed your car in morning warm-up and you didn’t get a chance to race. Explain the emotions of that weekend?

The build up was pretty good. We were confident after a reasonable result at Sandown, and we’d done a lot of testing at Phillip Island, so we were quite comfortable at the high-speed circuits and really looking forward to getting to Bathurst.

Bargs put it on provisional pole, and there were some big celebrations just for that. In hindsight, it probably could have been managed … not go with the hype. Bargs was pretty upbeat and confident. The lap that he crashed, he was actually tracking faster than his qualifying lap.

It was a massive disappointment, obviously for myself but also for the team. It was a high-profile program and it came to a fairly sudden end.

There were a lot of expectations on it. Brock and the team’s media guys bunkered us down pretty quickly. From my point of view, it would have been easy for me to say something that I would have regretted! They cooled us down a bit.

At the end of the day, it was an accident, and Bargs and I actually got a chance to share a car in the 2009 race – we had some unfinished business together, and we did pretty good, just missing out on a podium.

Fast-forwarding to 2003, you ran your own car in the Supercars Championship. Tell us about the reasoning behind having your own entry and the pros and cons of team ownership in that era. 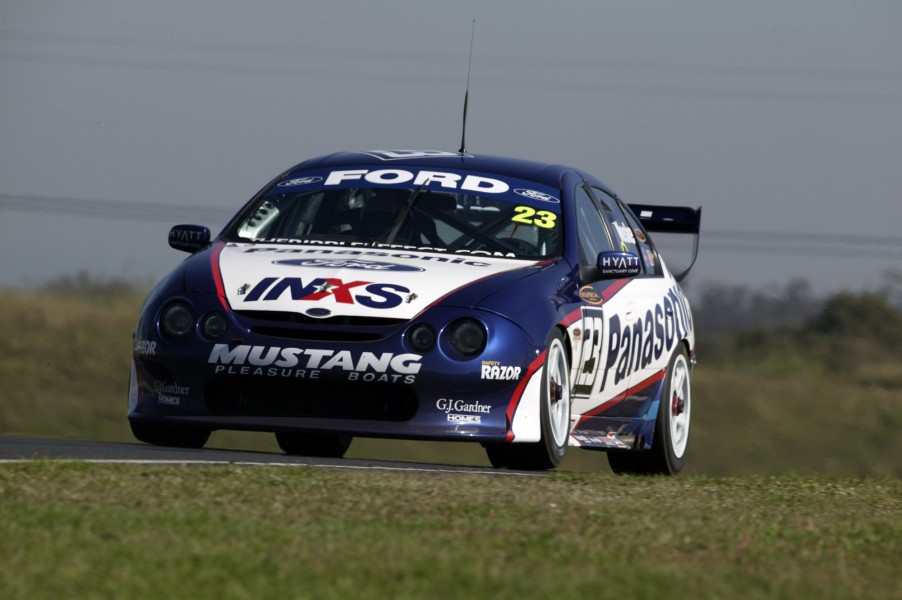 It was the end of the Prancing Horse team in 2002 and I was in limbo for a while, and we met a guy who sold us a fairly good load of bullshit!

It was the ICS sponsorship deal that had previously fallen over with Mark Larkham’s team. We did all of our own due diligence, and the guy had provided all of the right paper work and the package looked right.

I don’t know why we did it. If I had my time over, we definitely wouldn’t have because it was all very rough. We had the signage on the car for two races but never received a cent.

Half way through 2003, we had a verbal agreement with Red Bull for a two-car sponsorship for 2004. We had some pretty big ambitions, but all of that fell over, so we ran the year on a shoestring.

We actually had our engines being built by Penske in the United States that year, which I believe was Penske’s first foray in the Supercars scene, so we felt we had the right pieces, but the funding just wasn’t there.

At the end of that year, Craig Gore purchased the assets of the team, as well as 00 Motorsport, and that formed WPS Racing.

You were about 10 years before your time – a potential deal with Red Bull and a relationship with Penske!

That’s right! My Dad has known Roger Penske for over 30 years, so we got those engines put together in the States.

And the marketing manager for Red Bull at the time was one of Dad’s neighbours, so they struck up a bit of a relationship. Red Bull was a new brand to the market then.

I’ve still got all of the artwork of what the cars and the transporters would have looked like. We were trying to do a deal to put Mark Winterbottom into the second car too, so the sponsorship was based around Mark and I racing the two cars.

It was ahead of it’s time, but it just didn’t work out. It’s one of those things.

You became a regular co-driver after that period, including a four-year stint at Tasman Motorsport. Talk about some of your memories there … 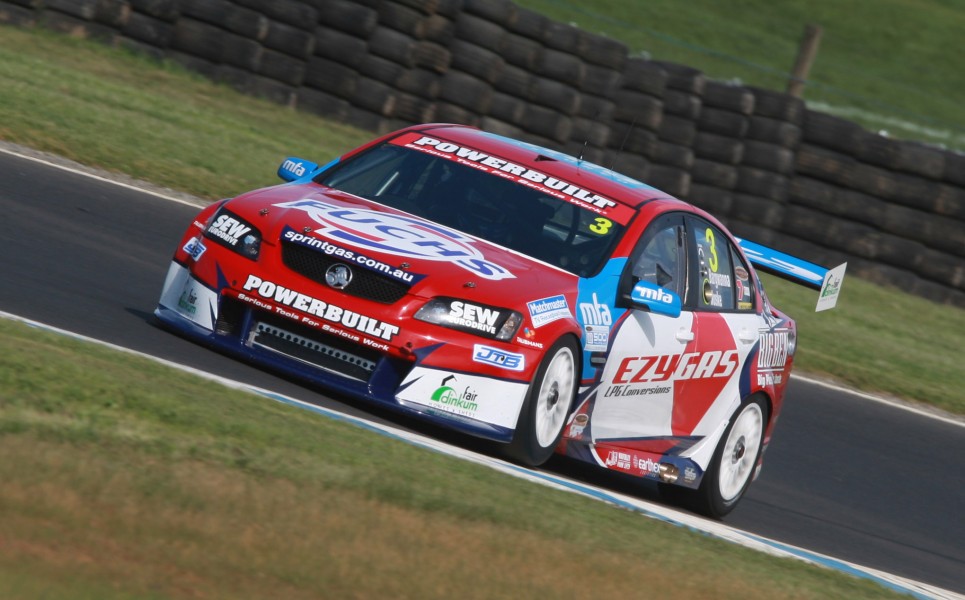 I really enjoyed my time at Tasman. It was a team in its infancy, and a lot of ambition. You could really see what they were trying to create. When they built their first in-house car, it was a huge step up.

I drove with my good mate Owen Kelly in 2006. He was one of my roommates when he had moved over to the mainland [from Tasmania] many moons ago.

I drove with a couple of Development Series drivers, which didn’t give us a great chance at winning, but in 2009, I got to drive with Bargs and not just be the second car – a car that was legitimately in contention.

We were on target for third place, but had an incident with Jamie Whincup that dropped us back to sixth.

The team was wound up after then, and I only did one more endurance season before hanging up the helmet. It was a shame that Tasman folded because I would have liked to remain with them.

Any itch to get back in the driver’s seat?

No, not really. I did the 2010 enduros with Lucas Dumbrell Motorsport and around that time, I knew that I was only going do the endurance races and I had a young family.

No longer was it about being an individual driver anymore – I needed to make sure I could provide a future for my kids.

It was around that time that I started working for the family business and during the Phillip Island 500 I spent most of my time on the phone making sure things were right at work.

My mind wasn’t on the job of car racing, so I knew halfway through that race that I didn’t have the time to focus on all the things that you need. I wasn’t very fit and I’d become overweight – I got ribbed a bit about that!

I knew my time was up. You just can’t be a part-timer unless you have the time to dedicate to it and you are getting results to retain your drive.

I still watch the series quite regularly. It’s booming and it is interesting. I think they said over the Winton weekend that [Fabian] Coulthard was the ninth winner so far this year – it’s very competitive.

The presentation and calibre of the teams is second-to-none, and when you see the in-car cameras and look inside those things, they have certainly come a long way.

31/05/2018
Stay In The Know
Sign up to the Virgin Australia Supercars Championship Newsletter
This website uses cookies to improve your user experience. By continuing, you will be providing your consent to our use of cookies.Ok