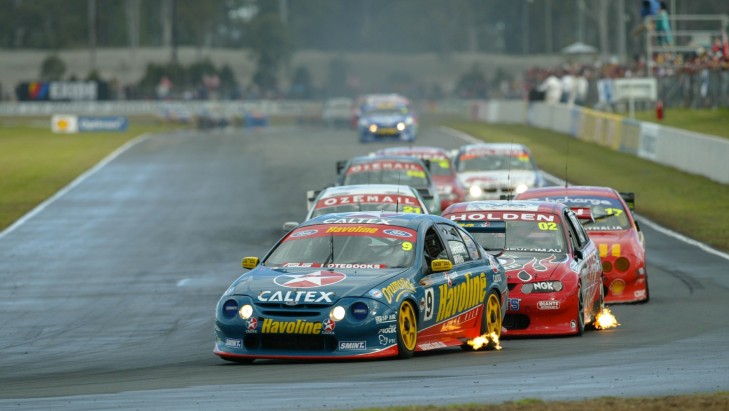 Today on Saturday Sleuthing we gear up for next weekend's Coates Hire Ipswich 400 by tracking down a V8 Supercar that enjoyed its greatest success at Queensland Raceway.

That car is the Stone Brothers Racing #9 Caltex Havoline Falcon AU (chassis AU3) driven by David Besnard and Simon Wills to a thrilling victory in the 2002 Queensland 500. 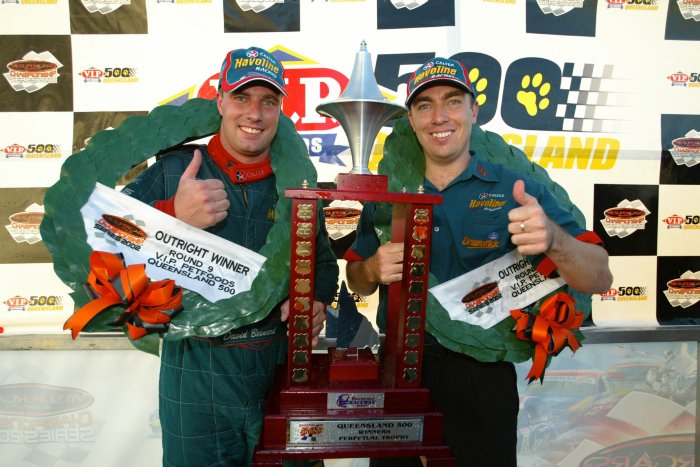 Back then, the Ipswich venue played host to the traditional 500-kilometre, pre-Bathurst endurance race, though 2002 would be the last time it hosted it. SBR benefited from its home track advantage and Besnard qualified fourth with teammate Marcos Ambrose on pole.

The Caltex Ford was in the hunt throughout the 161-lap race, and during the closing stages Besnard was running second and making inroads on the Kmart Commodore of Greg Murphy, which was in doubt to reach the finish on low fuel.

The Safety Car was called on lap 155 for Steve Owen's CAT Falcon beached in the Turn 1 sandtrap, leaving a three-lap sprint to the flag.

Murphy spluttered out of Turn 3 on the penultimate lap, Besnard pounced and the green Falcon took the race win - the first and only for our featured car, the first for Besnard and Wills and the first Ford win of 2002 that broke a streak of 12 round wins for Holden dating back to the previous season. 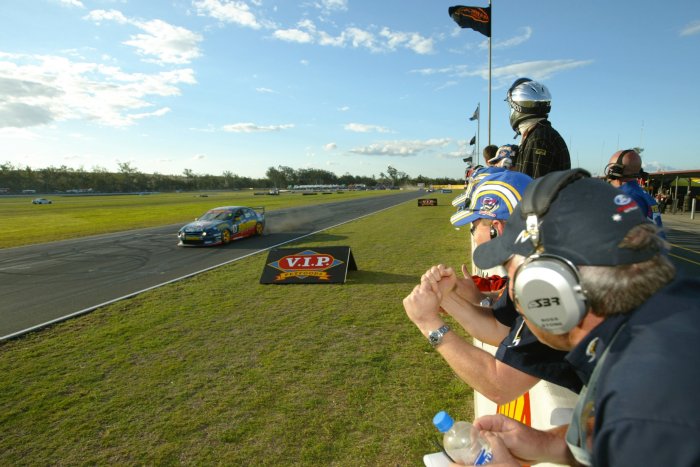 It was also the car's last race in the hands of SBR, who ran the car over three seasons.

The #9 Falcon started life as Tony Longhurst's Caltex Havoline car for the 2000 season. Longhurst debuted the car at Phillip Island and raced it all season, being joined by Besnard for the enduros at Ipswich and Bathurst. 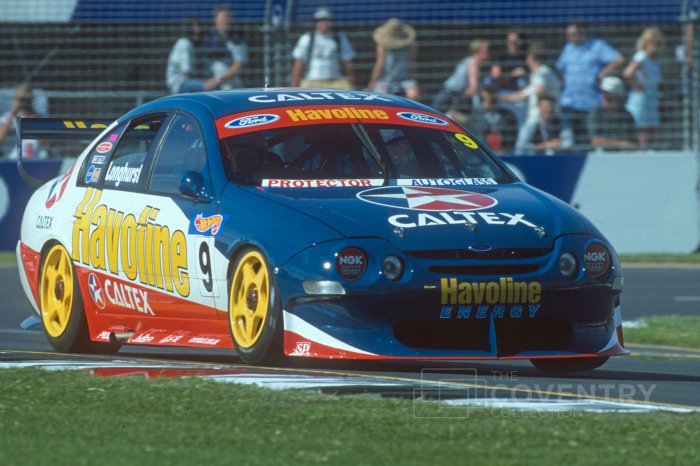 This car came agonisingly close to winning at Bathurst that year, even despite making more pit stops than anyone else and even having a flash fire during a pit stop! But just 10 laps from the finish, Longhurst clashed with Adam Macrow (driving John Faulkner's Asia Online Commodore) on the approach to Forrest's Elbow, damaging the Ford's front suspension and putting it out of the race.

Besnard's impressive performances in the enduros and a limited Dunlop Series (then known as the Konica V8 Lites) campaign saw him replace Longhurst for the following season in our featured car.

The highly rated rookie had a tough season, finishing 23rd overall in the points and driving AU3 all season. Matthew White co-drove for the endurance races. 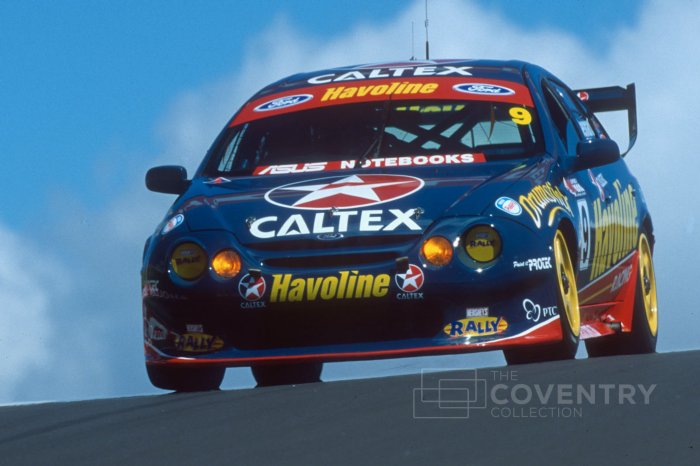 Besnard drove the car again in 2002 at all rounds up to the Queensland 500 before teaming with Wayne Gardner at Bathurst in the car Gardner had made a handful of appearances in that year.

It was crashed with Gardner at the wheel in practice, meaning a new car was built up in time for Besnard for the Gold Coast - three different cars for him in three successive rounds surely must be a record! Kevin Mundy's first race in AU3 was the non-championship Dunlop Series race at Bathurst.

The car was prepared by Paul Cruickshank Racing and backed by Actron Air. Mundy drove the car for the full Dunlop Series seasons in both 2003 and 2004 and it lay unraced in PCR's workshops in 2005 until Terry Wyhoon purchased it. 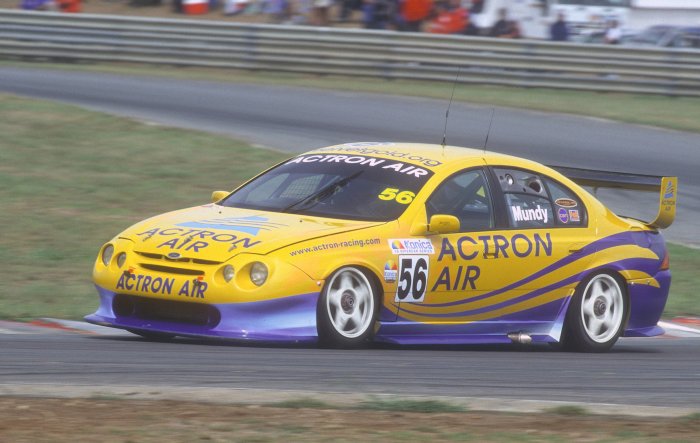 Wyhoon ran the car in both the Touring Car Challenge and the Dunlop Series in 2006 and actually won the reverse grid race at Wakefield Park.

Kiwi Paul Kelly, who later raced Porsche Carrera Cup in Australia, drove it at Queensland Raceway before Wyhoon completed the season in this car.

Wyhoon's Image Racing team retained it for 2007, with Wyhoon starting the season in it before Owen Kelly was set to step in at Queensland Raceway. After the first practice session, things took a very dramatic turn.

There had been a disagreement about who actually owned the car prior to Wyhoon purchasing it. Police appeared at the circuit, the car was towed from Queensland Raceway and impounded - mid race meeting!

It was eventually returned to Wyhoon and the former NASCAR/AUSCAR driver campaigned it for the remainder of the season.

Taz Douglas spent some time racing it in the 2008 DVS before Wyhoon stepped back in for the Winton round - the car's last start in V8 Supercar competition. 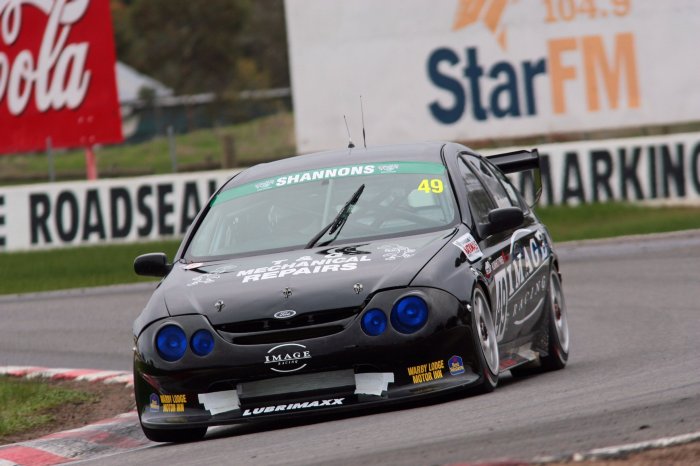 But it found another home in the Kumho V8 Touring Car Series on the Shannons Nationals schedule with Wyhoon racing it in 2009 before it was sold to its current owner Stuart Inwood in 2011.

He appeared briefly in the V8 Touring Car Series before concentrating his racing on state level Sports Sedan competition in New South Wales.

The SBR-built Ford was advertised for sale in 2012 and returned to its Caltex #9 livery as run by Besnard.

Sharp-eyed V8 Supercars fans will have noticed the car in action to this year's Winton 400 V8 Supercars Championship event, where Inwood raced the re-liveried Caltex machine in the Sports Sedan support category.

Inwood's AU is a great example of numerous V8 Supercars which have been brought back to their former liveries and specification in recent years, to be run in other categories, historic events or displayed around the country for fans to enjoy.

Our featured car has certainly had a colourful life. It was a Queensland 500 winner, nearly a Bathurst 1000 winner, survived a brush with the law and after pounding plenty of race tracks over the years, is still going strong today!

Saturday Sleuthing will take a break next weekend for the Coates Hire Ipswich 400 but returns on Saturday August 16 - with a Volvo Group A flavour.

Is this Ford's next V8 Supercar?

Fast Five at Five: With Will Davison

24/07/2014
Related Content
2014 Coates Hire Ipswich 400  ›
Stay In The Know
Sign up to the Repco Supercars Championship Newsletter
We use cookies to ensure that we give you the best experience on our website. If you continue to use this site we will assume that you are happy with it.Ok