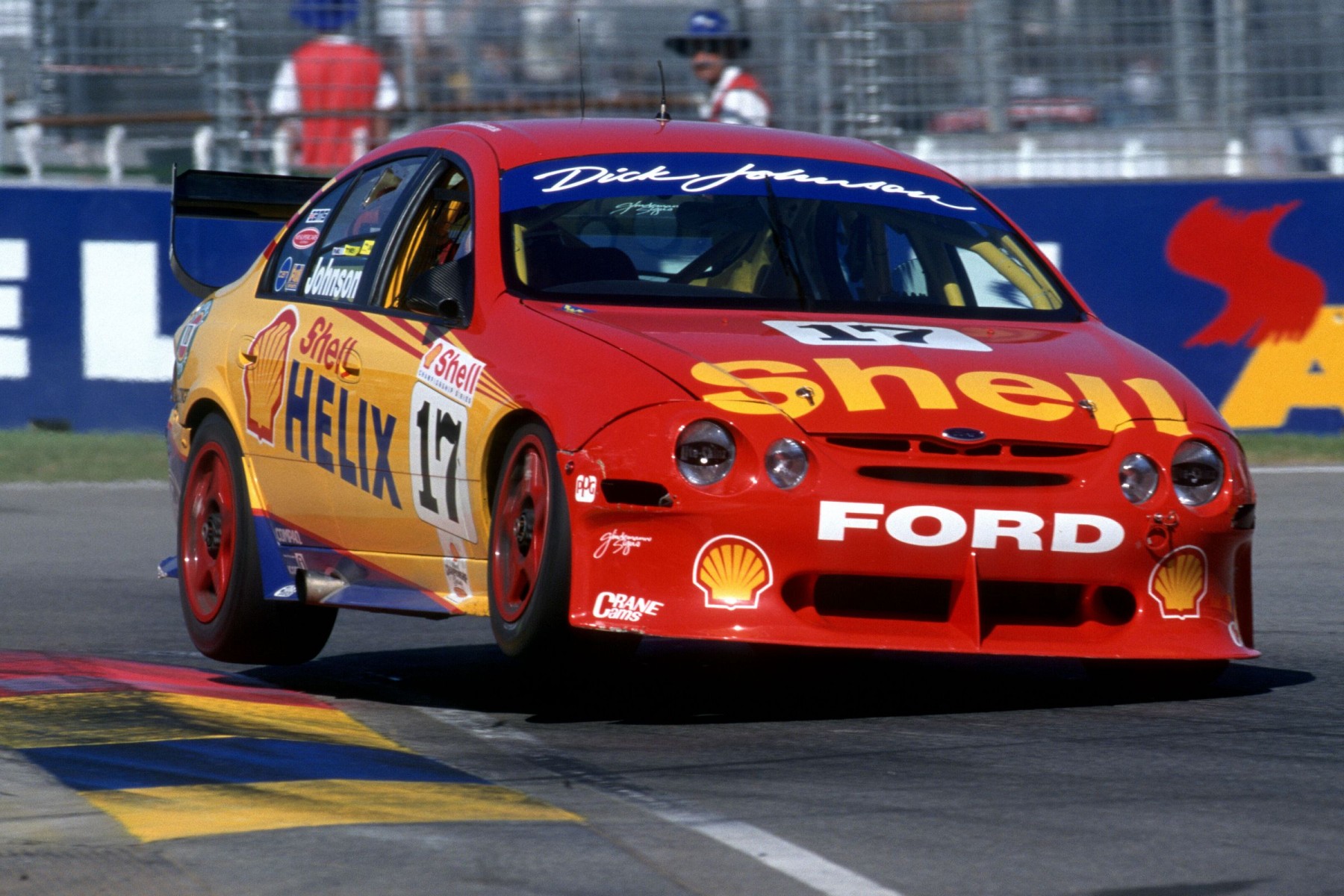 With a recent run of success for Shell V-Power Racing in the Virgin Australia Supercars Championship and the Supercheap Auto Bathurst 1000 just around the corner, V8 Sleuth thought it would be a good time to look back at the Falcon that Dick Johnson drove in his last appearance in the October classic in 1999.

Although it may not have had the most successful run according to the results sheets, this AU Falcon was part of the ‘farewell tour’ for one of the sport’s legends.

It was in this Ford Falcon AU - DJR AU10 - that the five-time Australian Touring Car Champion embarked on his final season of racing in 1999, culminating at that year’s Bathurst 1000, where Johnson teamed with son Steven. 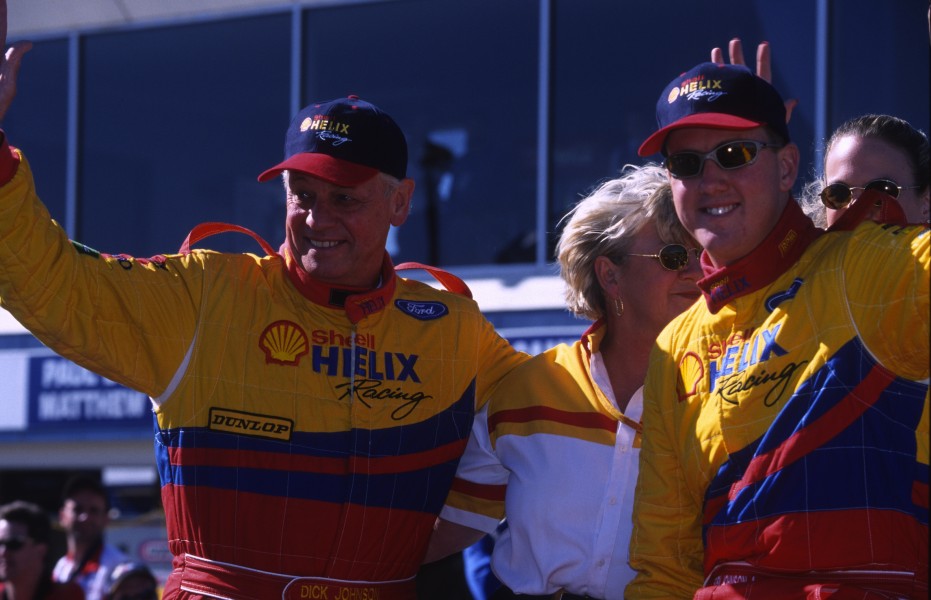 This car was the second AU Falcon built by Dick Johnson Racing in 1999 and made its first appearance as the as the #17 Shell Helix Falcon driven by Dick Johnson in the non-championship Albert Park event at the Australian F1 Grand Prix.

The new Falcon was given a shakedown at Lakeside, with son Steven driving for 17 laps, the car tested without a rear wing as the team only had one at the time and deemed it best for new signing Paul Radisich to have use of it as he got back up to speed in V8 Supercars!

Johnson Snr drove the car for the first time in opening practice at Albert Park to start his swansong season and he continued in it for the entire Shell Championship Series, save for the Calder round, where Steven deputised after his father suffered from sinus problems.

In fact, Johnson Jnr finished fifth in the round at Calder, the car’s best result in the sprint rounds that season before father and son teamed up together in this chassis for the Queensland 500 and Dick’s final Bathurst.

He and Steve narrowly missed the podium that day and finished fourth, though they were the first Falcon home at the end of the 161 laps. 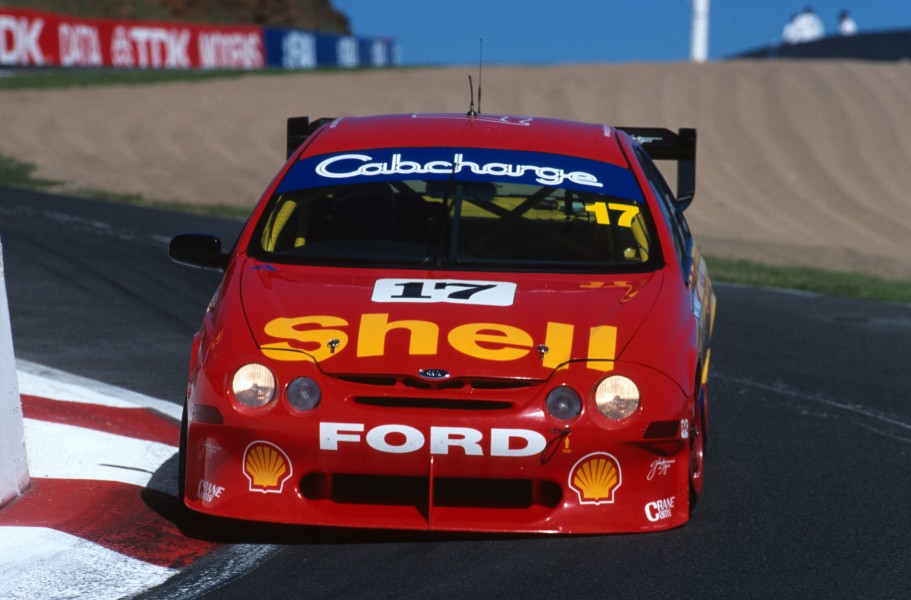 The chassis was rested for the non-championship Gold Coast Indy event in October. The team used its older-model EL Falcons before AU10 became Steven Johnson’s for 2000 when he joined the team full-time as the pilot of car #17.

He ran it through the 2000 sprint rounds and again teamed up with his father for the Queensland 500, who came out of retirement given Jason Bright was unavailable to join the team’s line-up due to Indy Lights commitments in the United States.

The car featured a blue ‘Tru-Blu’ roof for that one-off appearance, however Johnson’s final championship appearance ended after 67 of 161 laps with engine dramas. 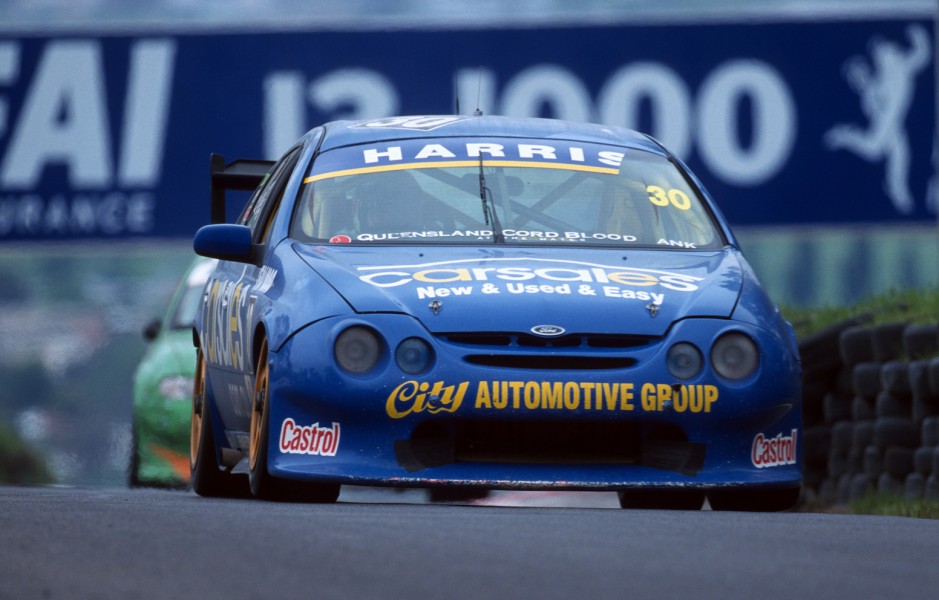 The Falcon was then sold to Craig Harris and turned blue with carsales.com.au backing for Bathurst that October, though engine problems took Harris and co-driver Stephen Voight out with 20 laps to go.

Harris Racing retained the car for the 2001 Konica V8 Supercar Series and it was turned into a white, Castrol-backed car for Harris to drive. Dale Brede co-drove with Harris at the Queensland 500 before Simpson joined Harris for the big race at Bathurst.

The car was retained by Harris Racing for 2002 and repainted red and yellow for Brede to drive as the #89 Gulf Western Oil Falcon in the Konica Series. 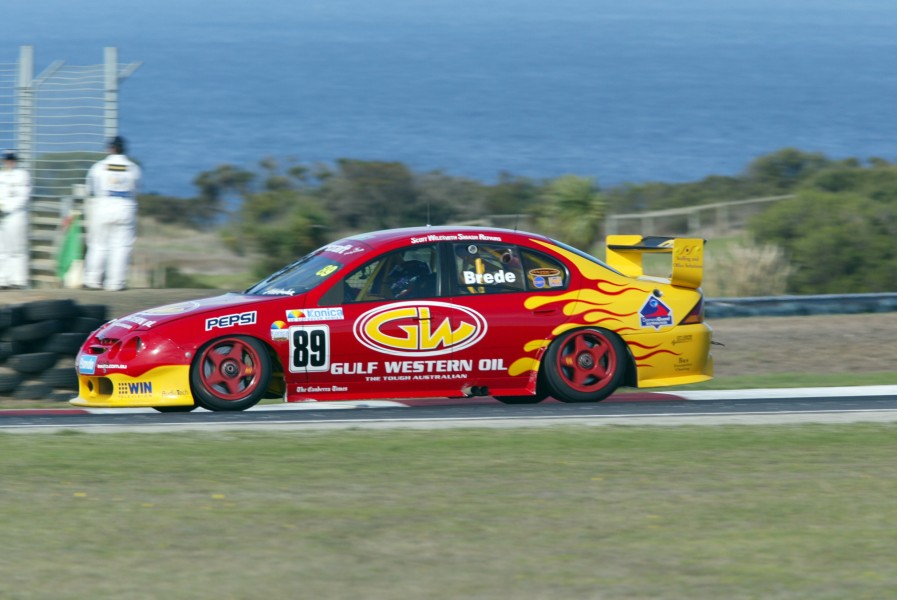 Brede won the first round at Wakefield Park (the only time all season Paul Dumbrell was beaten in a round) and finished second in the series to Dumbrell after also taking podium finishes at Phillip Island, Oran Park and in the final round at Mallala.

Harris had the car placed back into its familiar Shell Helix livery after the 2002 season was complete and placed it into his family’s growing collection of historic Australia touring cars.

It had a brand new motor, gearbox, diff and brakes and was essentially a turnkey racecar that was taken to Queensland Raceway for some on-track running in the years afterwards to keep the oil flowing through this special Falcon’s veins.

It sat among John and Craig Harris’ impressive collection of Ford racecars for some years until it was sold in mid-2016 to join the Pernechele’s Family Ford Museum in Western Australia, roughly 50km north-east of Perth.

And the best part is that Johnson fans in the West can see this car with their own eyes.

Visitors can book to visit the Ford Farm Museum and see DJR AU10 among a great collection of Ford cars via www.fordfarm.com.au.

All proceeds from the $10 entry fee go directly to the Princess Margaret Hospital for Children in Perth.

Saturday Sleuthing returns next weekend when we take a look at the restoration of a Bathurst-winning car - what is it? You will have to read to find out!