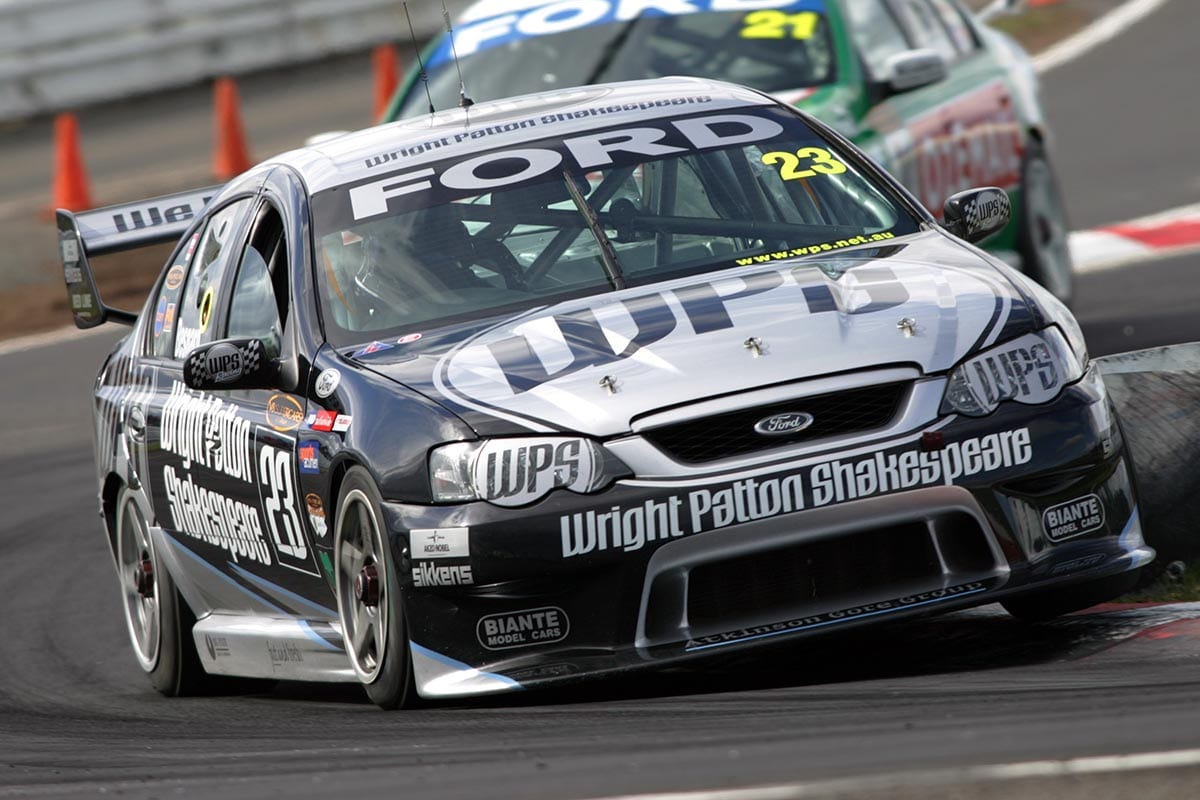 This week Saturday Sleuthing is taking a look back at a Ford Falcon BA that pulled off one of the biggest upsets in the history of Supercars Championship racing at Symmons Plains.

WATCH: BEHIND THE SCENES OF PERCAT'S ESERIES PREPARATIONS

History records that David Besnard took the victory in the final race of the weekend at the 2004 Tasmania Triple Challenge, an event that marked the championship’s return to the ‘Apple Isle’ after a five-year absence.

However, it took a week for the win to be officially awarded.

The controversy stemmed from a lap scoring dispute – a rarity in modern motorsport following the adoption of computerised timing systems.

The problems began when the Safety Car came out in the middle of compulsory pit stops on lap 11 of the race: early leader Todd Kelly had blown an engine down the front straight, the oil trail sending Paul Weel crashing into the barriers.

Due to the hazard posed by the oil, the Safety Car was instructed to come out in front of the first available car – fifth-placed Greg Murphy, who would have assumed the lead had the pit stop cycle completed naturally.

But when it came time for the Safety Car to pick up the leader, it was Besnard: he and the other three cars running ahead of Murphy had yet to do their compulsory pit stop, and the timing of the Safety Car allowed them to complete their stop and rejoin at the tail of the queue, albeit almost a lap ahead of the rest of the field.

Complaints from rival teams (suggesting a timing and scoring glitch had led to a mistake) saw Race Control change the order under a subsequent Safety Car, waving Besnard, Jason Bright and Mark Skaife past to send them to the tail of the field.

Murphy went on to take the chequered flag first ahead of Russell Ingall and Steven Richards, while Besnard crossed the line in 18th – a result his WPS Racing team immediately protested.

One week later, the race stewards confirmed their investigation revealed that there had been no glitch in the timing and that Besnard was indeed the winner, having extensively reviewed detailed timing printouts, Network 10 footage and in-car camera vision to work out the chain of events.

The debated circumstances over the win overshadowed Besnard’s speed earlier in the weekend.

Fourth fastest in practice but only able to qualify a lowly 25th, Besnard raced his way up to eighth in Saturday’s opening race of the weekend. 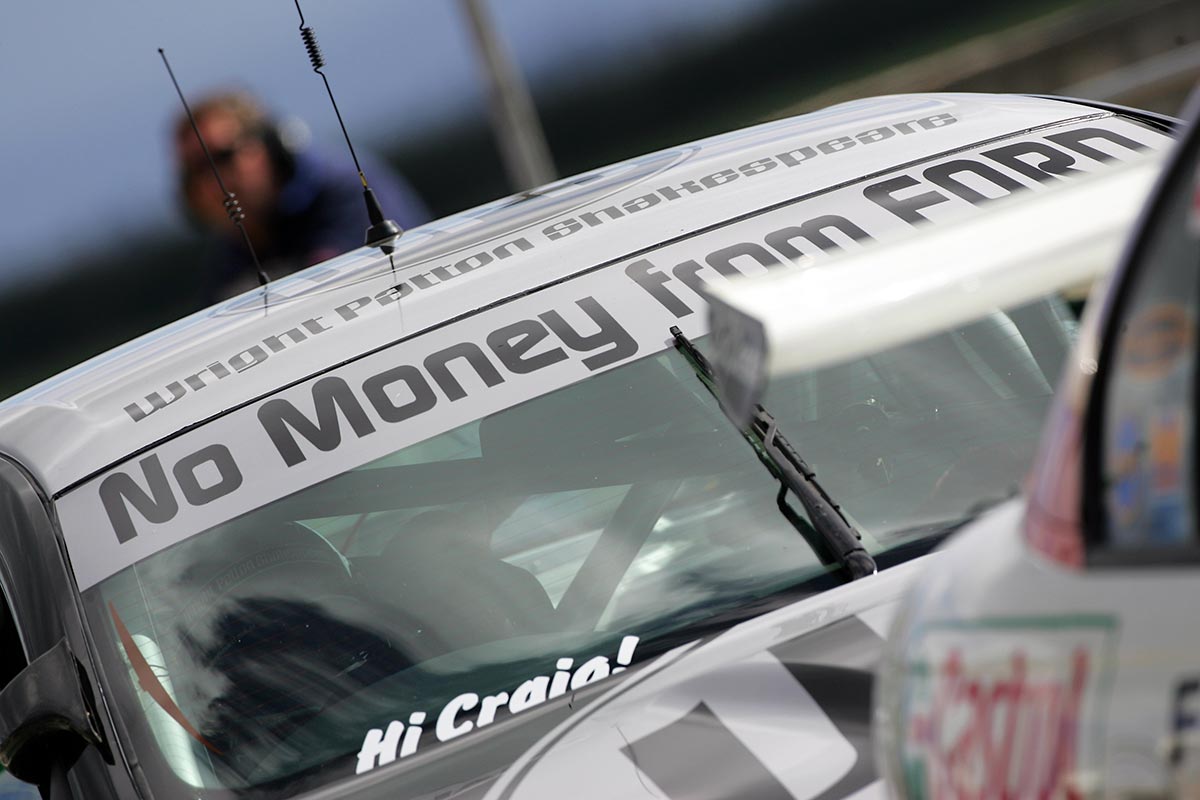 Sunday morning’s warm-up session set the tone for a strange day ahead: both Besnard and teammate Owen Kelly were black flagged to have an “inappropriate” windscreen banner removed, the usual ‘Ford’ text having been replaced with the words ‘No money from Ford’ making it clear that the team was receiving no financial support from the manufacturer.

The #23 car ran ninth in the closing stages of the second race before Besnard was tapped into a spin at the hairpin, meaning his Race 3 victory came from 29th on the grid!

The Falcon that Besnard drove to his unlikely victory was originally built in 2003 by 00 Motorsport, its chassis number 00MS-017-BA-02 denoting that it was the second and last BA Falcon built by the squad, and the 17th five-litre touring car raced by a team that started out as Gibson Motorsport.

Debuted by Rodney Forbes at Eastern Creek, he raced it at Winton and Hidden Valley before the team was disbanded, its assets eventually purchased by Craig Gore to set up his new WPS Racing squad for 2004. 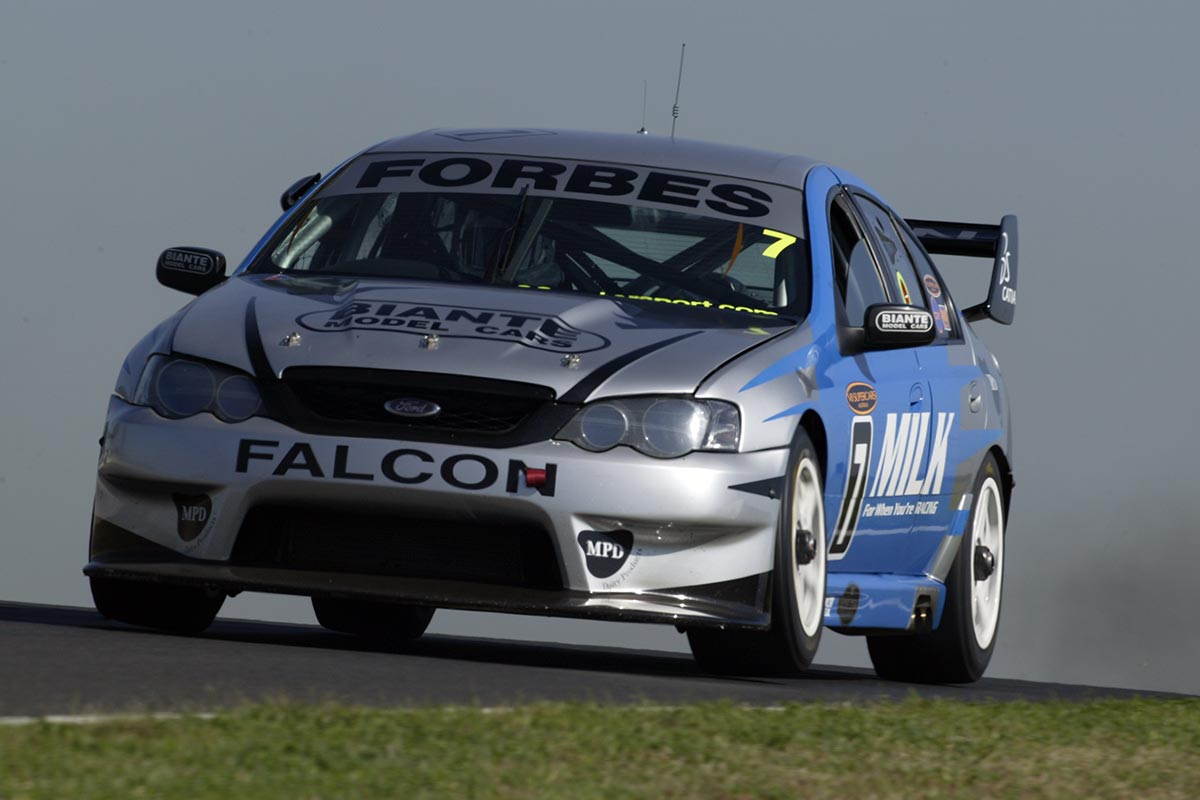 The chassis had its first race in WPS’ signature silver and black colours at Albert Park with Mark Noske at the wheel before becoming Besnard’s car for the bulk of the season.

He partnered with Charlie O’Brien at the Sandown 500 after original co-driver Neil McFadyen fell ill, and John McIntyre at the Bathurst 1000, the Kiwi then racing the car at the Gold Coast round while Besnard enjoyed a one-off Champ Car start.

Besnard backed up his surprise victory by qualifying for the Top 10 Shootout at the Eastern Creek grand finale and finishing the opening race in fourth.

The strong finish to 2004 failed to carry into 2005, Besnard sticking with the chassis throughout the season. 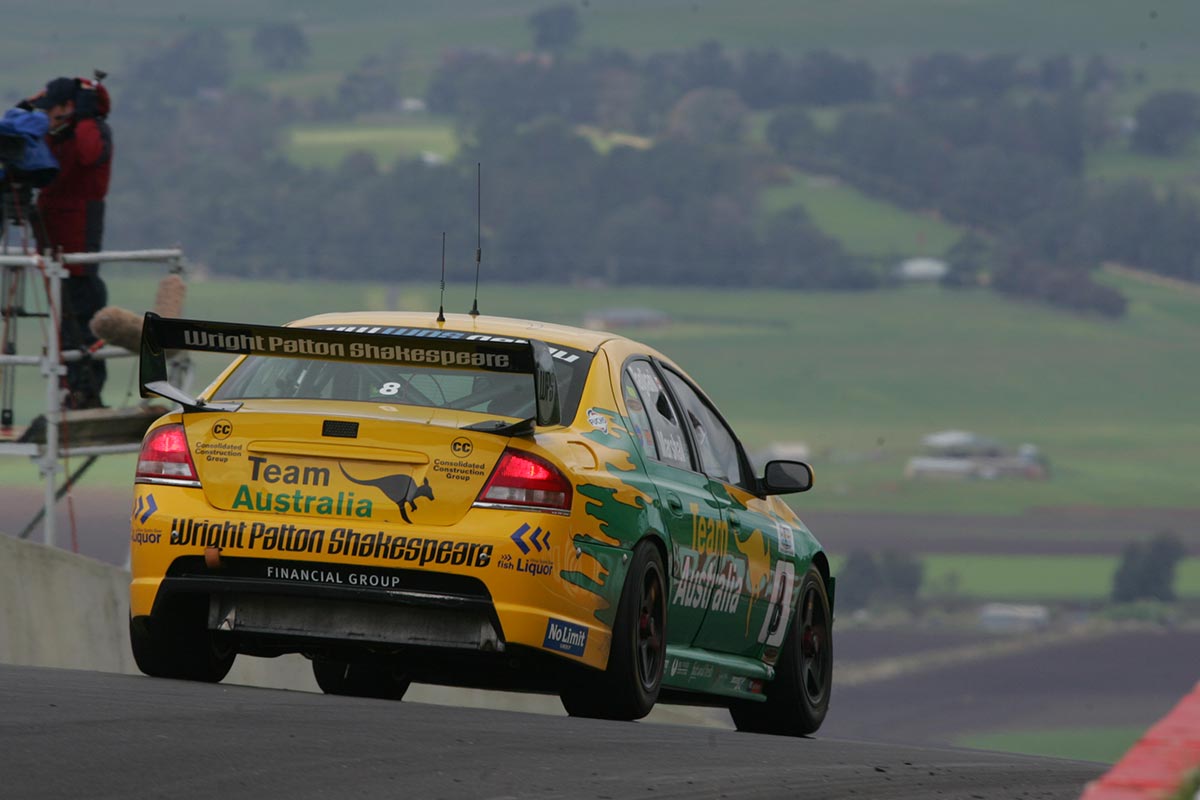 The only exceptions were the enduros, where the car was crewed by Champ Car World Series drivers Marcus Marshall and Alex Tagliani in a special Team Australia livery, the duo bringing the car home 13th at Bathurst.

WPS Racing merged with Larkham Motorsport for the 2006 season, with this car becoming Jason Bargwanna’s #10 car for the entire season bar the final round at Phillip Island, where he and teammate Max Wilson swapped cars for the weekend.

Bargwanna continued to campaign the car, upgraded to BF Falcon trim, through the 2007 season, pairing with Grant Denyer for the Sandown 500 before Denyer and Michael Caruso piloted the car at Bathurst.

Bargs’ best results in the car were a pair of seventh placings; one with Craig Baird at the 2006 Sandown 500, then another on the Gold Coast streets in 2007. 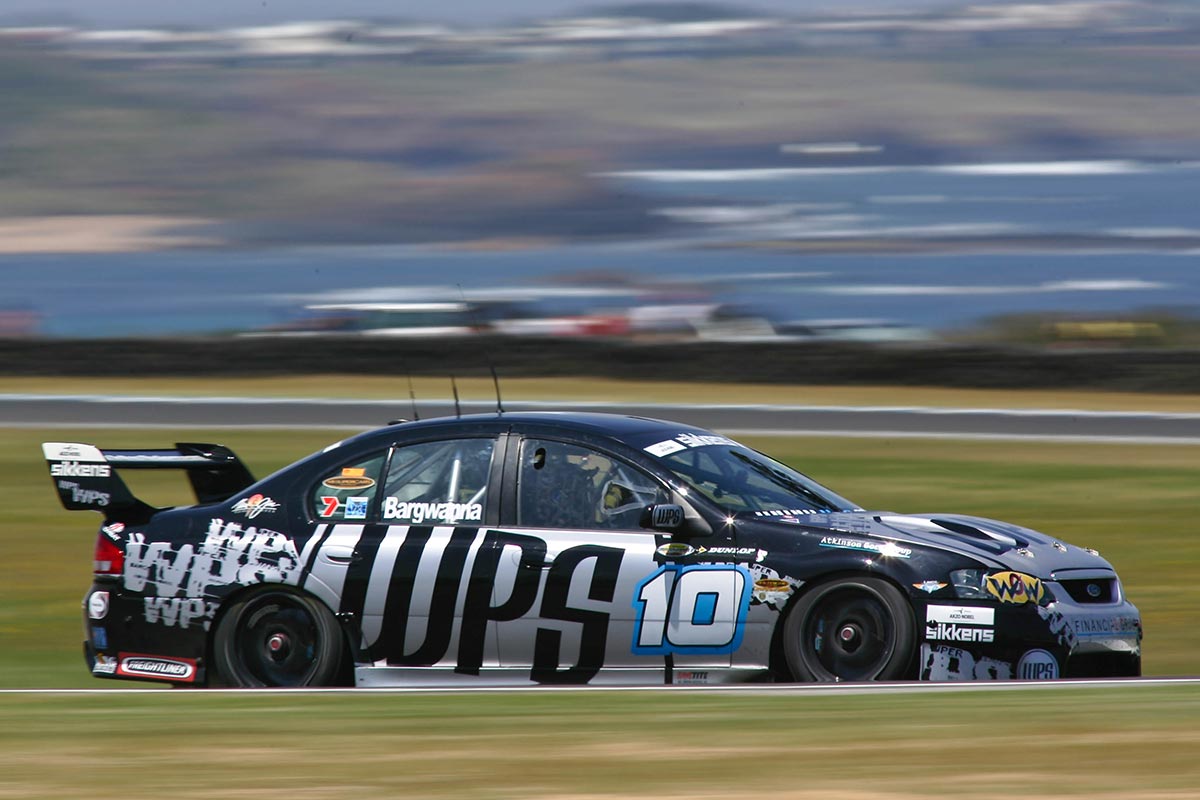 The close of the 2007 season marked the last racing appearance for this car, as well as the last time WPS Racing took part in a Supercars event.

Gore’s squad shut down on the eve of the 2008 season and the team’s cars and equipment were sold off.

This particular chassis briefly stayed in Australia before being sold across the Tasman to New Zealand, where it and another ex-WPS Falcon were being run as ride cars at the Taupo circuit, before being put up for sale several years ago.

Hardly used in the time since, Besnard’s Symmons Plains-winning Falcon remains for sale at the time of publishing.

03/04/2020
Stay In The Know
Sign up to the Virgin Australia Supercars Championship Newsletter
We use cookies to ensure that we give you the best experience on our website. If you continue to use this site we will assume that you are happy with it.Ok