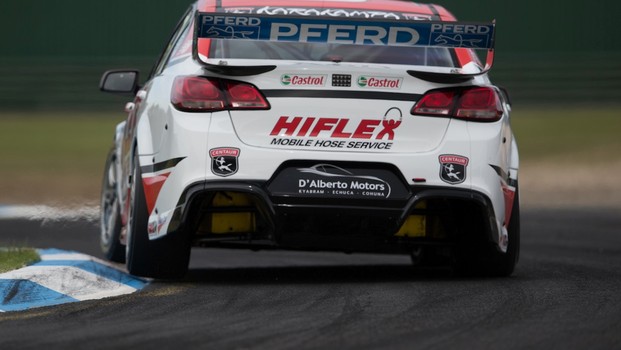 On the back of the weekend’s result, Tony D’Alberto says his team needs to assess reliability and car balance at its test day on Wednesday.

Sandown is quickly becoming a bogey track for 27-year old D’Alberto, who partnered with Jonny Reid and eventually finished the weekend’s race 23rd after issues with the throttle on Sunday.

“The problem we had with the car was basically the throttle jamming open, and the throttle cable getting jammed when it was getting a little bit overheated,” D’Alberto told v8supercars.com.au.

“It’s something we haven’t experienced before, but will have to rectify for Bathurst…

“Jonny had the same problem in his race on Saturday. We thought it was fixed – I had no problems in my race, or the morning’s warm up – but it reared its ugly head again.”

The HIFLEX backed team is a customer of Walkinshaw Racing, and while D’Alberto said the relationship with WR was good, he was frustrated with technical issues outside of his team’s control.

“The biggest thing for me, it was just disappointing, because it wasn’t anything we’d done ourselves – that’s one side of being a customer team. You have to deal with that, it’s part and parcel of that.

“But we couldn’t achieve results this year without the customer relationship.”

The team shares a pit bay with the Supercheap Auto WR entry, which explains why D’Alberto was the only main series driver behind the when on the starting grid for the 500.

“That came about because we wanted to make sure we were in as good a position as we could be when we handed the car back to Jonny,” he said.

“We were starting very close to the Supercheap car and share a pit, so it was pretty important for us to get ahead of them, so we didn’t have to stack behind them. That’s part of the reason.

“I’ve got a bit more experience than Jonny in the car, so (I started) instead of putting him under the pump.”

The plan worked – the #3 Commodore was ahead. But by lap 23, the car was being pushed into the garage.

However, D’Alberto feels after testing the team will go to Bathurst with a clear mind and isn’t worried about speed. “We’ll be right on the day,” he said.

This is the time of year teams are in discussion with sponsors, and D’Alberto knows a good result at Mount Panorama would be valuable.

It was important the team showcased what it could do.

“Results really help set up for the following year – obviously there are a lot of discussions at the moment with sponsors and that sort of thing … It is a concern for everybody to try and fund racing at the moment, it’s very difficult.”

Percat Looks Beyond Walkinshaw for Drive

FPR Catch up with - Tim Edwards

Courtney: I Want to Bring Whincup Down Again!

Tony D'Alberto  ›
15' Team CoolDrive ›
2013 Supercheap Auto Bathurst 1000  ›
Stay In The Know
Sign up to the Virgin Australia Supercars Championship Newsletter
We use cookies to ensure that we give you the best experience on our website. If you continue to use this site we will assume that you are happy with it.Ok