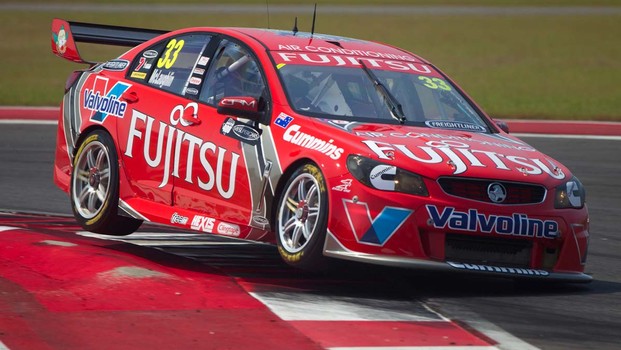 Get to know the faces behind the scenes in V8 Supercars – the Pit Crew Profile is the first of a new segment running on V8Supercars.com.au, profiling key team members up and down pit lane.

Starting with #33, steered by Scott McLaughlin and currently placed 11th in the Championship, meet the car's engineers, mechanics and tyre technician, pictured left to right.

A V8 Supercars engineering legend, Hollway actually startedhis career in aviation, working at the government aircraft factory. He thenmoved to road cars with Nissan, but shifted on to Holden Special Vehicles whenlocal production ceased in 1992. He volunteered at Holden Racing Team for a couple of years before moving to Albury to work for Brad Jones Racing in the mid-1990s SuperTouring era.

Hollway shifted to GRM in 2010 to work with Lee Holdsworthand lead the team’s engineering development. When ‘Leethal’ left for Stonebrothers, Hollway guided Alex Premat through his rookie season, before teamingup with teenager Sott McLaughlin for 2013.

Explain your nickname: “I was nicknamed ‘Krusty’ atWalkinshaws but the boys here wouldn’t cop that. Lee called me ‘Patches’ afterthe character in that Dodgeball movie, the real cranky old bloke in thewheelchair who drinks his own urine… I don’t do that.”

The 23-year old from Mount Gambier (SA) combines hisfull-time position at GRM with his mechanical engineering studies at RoyalMelbourne Institute of Technology (RMIT).

His motorsport history dates back to kart racing at 13, butthe realisation that he was not cut out to be a top-line driver prompted him tohop the pitwall and pursue a career in engineering.

He started at GRM doing work experience, but then came backfull-time in late 2012 as a design engineer before being swapped to the data roleon McLaughlin’s Commodore for 2013.

“It’s been really good so far, I have learned so much in thelast few months and hopefully we just keep improving,” he said. “It’s beenawesome to get the results that we have.”

Explain your nickname: “I can’t really. It took them a fewmonths to come up with it but they came up with it in the end.”

Born in Port Pirie (SA), Kroemer moved to Adelaide afterhigh school to pursue a career as a motor mechanic. He became involved inmotorsport when customers at the Subaru dealership he worked for recruited him to help out at events. Then he met Tony Quinn at a tarmac rally and startedworking for him as well, in both rallying and circuit races. Kroemer has alsoworked on a contract basis for Peter Fitzgerald Racing Services and Triple XMotorsport in New Zealand. He met Garry Rogers several years ago and wasoffered the #2 spot on car 33 last year when a position became vacant. He shiftsup to #1 for 2013.

Working for GRM is Kroemer’s first full-time gig in motorsport,previously combining his contract work with dealership employment: “It’s good,especially learning new organisational skills as number one, making sure wehave all the parts we need to work on the car.”

Explain your nickname: “The first round I was with the teamI was still getting to know the guys and there was a problem with my ticketcoming back from Darwin and I couldn’t get on the flight. All the boys rolledup at the other end in Melbourne and they were looking everywhere for me. Icouldn’t ring them because I didn’t have their numbers then. There was a movieat the time called ‘The Hangover’ and the plot was to find Doug, so I’ve beenDoug ever since.”

While this is 20-year old Evans’ first full-time job inmotor racing, he has been pursuing the path for some years, gaining workexperience in various junior categories including Formula Ford and Porscheracing, as well as spending six weeks at Lucas Dumbrell Motorsport on workexperience in 2011.

Originally from Maffra in Victoria’s east, Evans has movedseveral times while studying and working in motorsport. It was a stint with GRMat Bathurst last year that led to the chance to join the operation full-time.

“I’m loving it, it’s a lot of work, it’s a lot late nightsbut I come from a small country town sogetting to travel around a bit is pretty cool,” he said.

Explain your nickname: “Garry reckons I don’t talk much andI just sneak around the workshop like Casper the friendly ghost.”

Originally from Gundagai in NSW, Mitch started workexperience at GRM while still in year 10 at high school in 2007. In 2008 and2009 he travelled with the team to NSW and Victorian Championship rounds as amechanics’ helper while completing his high school studies.

In 2010 he started full-time with the team as an apprenticefabricator and picked up the tyre technician role for #33 halfway through theseason, a job he has done ever since.

Scott McLaughlin is an apprentice sheetmetal fabricator atGRM and the two of them had to repair the Kiwi rookie’s car after thePukekohe shunt: “I am in the fab shop with him, we are next to each other… I amtrying to teach him how to weld!”

Explain your nickname: “The boys think I don’t have abackbone hence the squid.”