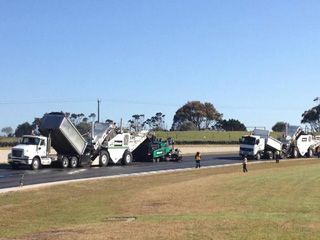 PHILLIP Island’s Grand Prix Circuit usually rumbles to the sound of V8 Supercars speeding down Gardner Straight at 270 km/h but for the next two days the focus is on a machine travelling at the scorching speed of  …. 0.3 km/h!

The world-famous 4.445-kilometre circuit is being resurfaced today and tomorrow with over 5000 tonnes of asphalt laid in a $3 million upgrade.

After months of preparations, site surveys and million of 40mm off the old surface, the final pave will take two days, weather permitting.

Today’s roll out kicked off at 8.00am and started from just before the last corner onto Gardner Straight, proceed through Doohan Corner (turn one) and finish just before Stoner Corner (turn three).

Tomorrow will see the rest of the circuit resurfaced with the paver machines used laying 300 tonnes of asphalt an hour at the consistent pace of five metres per minute.

The last time the circuit was resurfaced was back in 1998 and, prior to that, in 1988 before the first Australian Motorcycle Grand Prix held the following year.

“The circuit is used over 300 days a year and we have had a good 14 years from this track,” says circuit Managing Director Fergus Cameron.

“The stresses and strains of Casey Stoner on a MotoGP bike or the World Superbike riders going around this place at over 330 km/h all take their toll.

“And then there’s Lowndes and Whincup and their rivals ripping round the track in the V8 Supercars, plus loads of other events, ride days and test days.

“The track has served us very well but it is time to give it a makeover.

“Because of the layout and setting of this track, Phillip Island is considered one of the world’s motorsport meccas.  It never fails to produce awesome racing, and we want to ensure riders and drivers compete on the smoothest, fastest track in the world.”

A fleet of construction equipment an up to 70 personnel are working on site to complete the resurface work, which includes other upgrades to infrastructure while the circuit is shut down.

Track works will include the installation of asphalt run offs at turns 1 and 4, removal and replacement of 1.3-kilometres of kerbs, new barriers, improved drainage and a new surface on the paddock, scrutineering area, fuel compound, expo and Visitor Centre.

The V8 Supercars Championship will return to race on the new surface on November 23/24 next year at the Phillip Island 400.

06/12/2012
Stay In The Know
Sign up to the Virgin Australia Supercars Championship Newsletter
This website uses cookies to improve your user experience. By continuing, you will be providing your consent to our use of cookies.Ok